Handgun ban would have 'no impact,' police union head warns

The president of the Toronto Police Association says nothing in his experience would lead him to believe a government ban on handguns would reduce shootings.

Toronto and Montreal city councils have called for it, Toronto's mayor has demanded it, the federal government is examining it, but the head of Toronto's police union says a handgun ban won't stop shootings.

After a string of gun-related deaths and injuries in Toronto this summer, the city called on Ottawa to ban the sale of handguns in the city and asked the province to halt the sale of handgun ammunition. Montreal made a similar plea soon after, calling for a nationwide end to private ownership of handguns and assault weapons.

In the following weeks, federal officials avoided giving a straight answer on whether that ask was in the government's plans — only saying they would "consider" looking into a gun ban.

Bill Blair, the new minister of organized crime reduction, told CBC News the Liberals were open to exploring all options, but stopped short of revealing what that list of possibilities included.

Then at the end of August, a section on a handgun ban appeared in Blair's mandate letter.

"You should lead an examination of a full ban on handguns and assault weapons in Canada, while not impeding the lawful use of firearms by Canadians," it read.

That passage has Toronto Mayor John Tory celebrating, but not everyone is praising the move.

"There's no way in my world or any world I know that this would have an impact on somebody who's going to go out and buy an illegal gun and use it to kill another person or shoot another person," Mike McCormack, the president of the Toronto Police Association, said Friday.

There's no way in my world or any world I know that this would have an impact on somebody who's going to go out and buy an illegal gun and use it to kill another person or shoot another person. - Mike McCormack, Toronto Police Association president

"It really has no impact on the psyche of a gunman."

The intention is noble, he added, but it's "A notional gesture at best."

Instead, McCormack would rather see more resources poured into policing and social services.

He said his years of experience in policing have taught him something about gun crime — individuals who steal, sell or use guns illegally are already facing mountains of jail time, so they're unfazed by one more law that condemns their actions.

Shootings have been on the rise for the past few years in Canada, and in 2016 more people were killed by guns than by knives.

The majority of Canadians don't meet requirements to legally own a handgun. Currently, licences for those types of firearms are restricted to collectors, target shooters and those whose employment might require them to own a handgun.

Handgun crime on the rise

Handguns, specifically, are at the heart of the country's gun statistics.

There were 130 homicides committed with a handgun in 2016, according to a recent Statistics Canada report — the highest number in more than a decade.

Handguns accounted for 21 per cent of the total homicides that year and more than half of shooting homicides.

Toronto police Chief Mark Saunders told city council earlier this summer that 50 per cent of firearms that are used for crimes are from domestic sources.

"Usually straw purchasing. So lawful owners who purchase large amounts of firearms and then distribute them to the criminal entities that are out there," he said.

However, neither the RCMP nor Statistics Canada collect national statistics on whether guns are smuggled into the country or sourced domestically.

"We don't know the origin of firearms involved in gun crime in Canada," said Lynn Barr-Telford, director-general in charge of justice surveys at Statistics Canada.

The government has repeatedly acknowledged gun violence is not a one-solution problem. Even examining a handgun/assault weapons ban will take time and careful consideration. 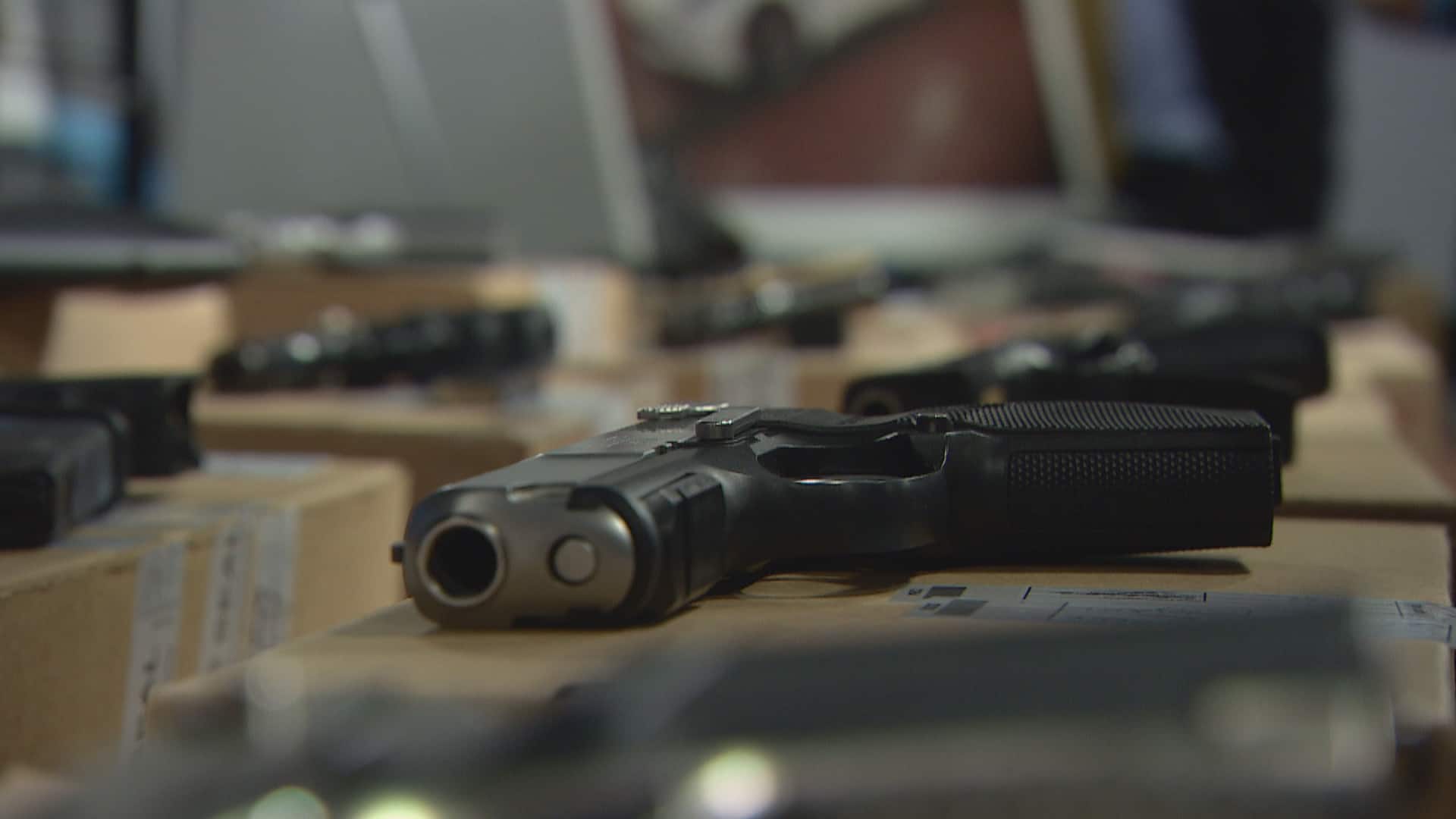 Is it time to ban handguns?

3 years ago
9:55
A series of deadly shootings in Toronto have shaken the city. The mayor, John Tory, is now proposing banning the personal ownership of handguns. We take a look at whether a handgun ban is the answer to help make streets safer. 9:55

Even if the implementation is slow and lacklustre, Toronto's Mayor Tory wants to see a ban in place.

"If it's going to help even a little bit to stop one death from occurring in this city or one shooting, then to me it's a step that's worth the consideration that Minister Blair has been asked to give to it," he said.

But McCormack says studying and passing a handgun ban diverts resources away from other answers.

"It's a more complex issue and people are just looking for an easy fix," he said

"It's not just saying a full gun ban is going to make this magic panacea. It's a much more complex problem that really requires an honest dialogue."

In response to this criticism that a ban will be ineffective, a spokesperson from Blair's office said they remain committed to examining the option of a handgun/assault weapon ban.

"People are very concerned about gun violence. They want and expect their government to take effective measures," they said in a statement, pointing to the work they say the government has already done.

Handguns and other firearms are already heavily restricted by the Criminal Code, but critics have long called for a further tightening both on handguns and certain semi-automatic weapons.

This spring, the Trudeau government introduced new firearms legislation, Bill C-71, that would expand background checks to look for warning signs over the entire life history of anyone applying for a gun licence, instead of the current laws which only examine the past five years.

That legislation, if passed, would also require gun retailers to keep inventory and sales records.