The Liberals promise that the 2015 election will be the last to have been decided by the first-past-the-post electoral system. Though proportional representation is a potential replacement, the Liberals' preferred option of a preferential ballot would play in their favour. 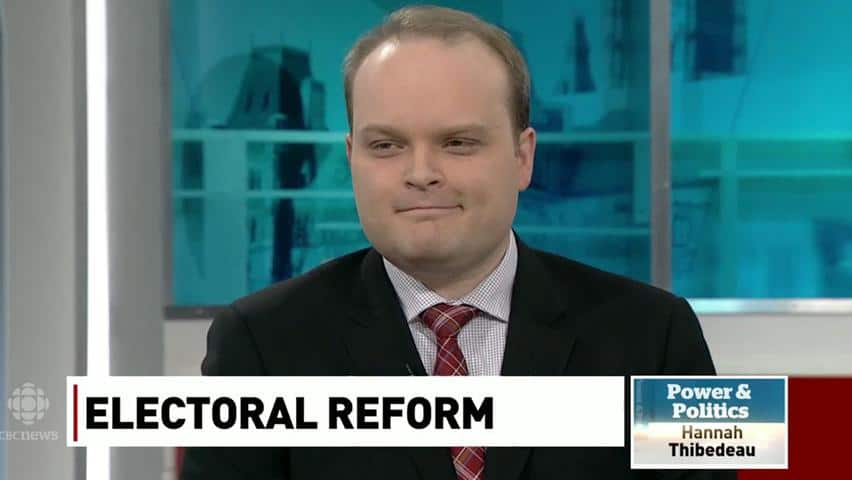 Which party would benefit from a change in voting systems?

5 years agoVideo
3:44
Eric Grenier looks at how the last election may have played out using different voting systems 3:44

It is often said that a party that wins an election has little incentive to change the rules that brought it victory. But what if a rule change increases that party's odds of winning again — and by an even larger margin?

A number of options are on the table for the Liberals as they move to fulfil their promise of changing the way Canadians elect their MPs. But based on an analysis of October's federal election results, the system that is the party's preferred option would have delivered Justin Trudeau an even greater victory than he won a month ago.

The ministerial mandate letter sent to Maryam Monsef, Canada's minister of Democratic Institutions, laid out the tasks she will be expected to complete in her new role.

Among other things, she was directed to "bring forward a proposal to establish a special parliamentary committee to consult on electoral reform, including preferential ballots [and] proportional representation." The goal is to make good on Trudeau's pledge that the 2015 federal election would be the last decided via the first-past-the-post system.

With FPTP, voters cast a ballot to elect a local representative, the candidate receiving the most votes booking a ticket to Ottawa. Some of the criticisms of this system are that most voters do not get the MP they voted for, and that it is a system that often produces majority governments with the winning party capturing less than a majority of votes. The Liberals took 39.5 per cent of the vote on Oct. 19, but won 54.4 per cent of the seats on offer. This is the norm in Canada — only two of the last 10 majority governments elected had more than 50 per cent of the vote.

Had a proportional representation system been in place to decide how the 338 seats in the House of Commons would be distributed, the Liberals would have won 134 seats, the Conservatives 109 seats, the New Democrats 67 seats, the Bloc Québécois 16 seats and the Greens 12 seats.

Compared with the results of the 2015 election, proportional representation would have penalized the Liberals to the benefit of the other parties. The Liberals would have been awarded 50 fewer seats, with the NDP gaining 23, the Greens 11, the Conservatives 10, and the Bloc six.

Though proportional representation will be part of the consultations, the Liberals are more likely to opt for a preferential ballot. It is the option preferred by the prime minister.

It is also the option that is most likely to help the Liberals win more seats.

With a preferential ballot, voters indicate which candidate is their first choice, second choice, third choice and so on. If no candidate wins a majority of first-choice ballots, the candidate in last place is dropped and those votes are distributed according to who was identified as these voters' second choice.

Candidates continue to be dropped and their votes redistributed until one candidate reaches the 50 per cent threshold, ensuring that a majority of voters get an MP they prefer over at least some of the other candidates.

An analysis of the results of the federal election, combined with regional-level second-choice polling conducted at the end of the campaign, suggests that had a preferential ballot been the method used to elect MPs on Oct. 19, all else being equal, the Liberals would have won an even larger majority.

Based on this analysis, the Liberals would have seen their seat total balloon from 184 to 224 seats, a gain of 40 seats over their actual performance. The Conservatives' seat total would have slid to 61 from 99, a drop of 38 seats, while the New Democrats would have been boosted slightly to 50 seats from 44. The Greens would not have increased their tally, while the Bloc would have dropped to two seats from 10.

The Liberals benefit from this system because they get almost all of the second-choice support from NDP voters, and are the preferred option for Conservative voters over the New Democrats.

The Conservatives are the consensus second choice of no group of voters, meaning that unless the Conservative candidate takes a very large proportion of the vote on the first ballot (well over 40 per cent) he or she would be overtaken by either the Liberal or NDP candidate who might have initially trailed by 20 points.

Of course, a change in the electoral system would transform how the parties campaign. Energizing the base and taking swing voters away from other parties would no longer be enough — leaders would also need to woo supporters of their opponents for those second-choice votes, and avoid alienating other voters entirely.

These estimates of how a change in the electoral system could have changed the results of the last election assume that voters do not behave much differently and that, more importantly, the parties do not overhaul their political strategies in order to adapt to a new system. But these limitations in this speculative exercise only serve to underline how important it would be for the opposition parties to take a different approach to campaigning — if they don't, it might be even harder to win next time.