As the NDP leader drums up support for the upcoming leadership review, historical precedent, both against the standards of other party leaders and former leaders of the NDP, looks problematic for Tom Mulcair.

Will Tom Mulcair's future be like Audrey McLaughlin's — or Lester B. Pearson's?

"The right number is going to be the best number I could possibly get", said NDP Leader Tom Mulcair Wednesday, speaking with members of the press following his party's weekly caucus meeting.

Mulcair was asked what result he would like to see in his party's leadership review vote in April.

But the best number he can get may not be enough, with Mulcair agreeing that the 70 per cent support level mentioned by party president Rebecca Blaikie is "the type of threshold we have heard members express," among others.

If he does reach that bar of 70 per cent and stays on as leader, he would be an outlier by the standards of former NDP leaders — as well as other party leaders who have taken a thumping at the ballot box.

Not many party leaders have suffered worse losses in both seats and votes than Mulcair did on Oct. 19. The NDP's final tally on election day was a drop of 59 seats from the party's previous electoral performance, representing a loss in seat share of 20.4 points, and a decrease of 10.9 points in the NDP's share of the popular vote.

And of those leaders who did do worse than Mulcair, very few had much future electoral success at the helm of their party — if they stayed on at all.

The loss in seats, to just 44 in 2015 from 103 in 2011, was significant by the standards of federal electoral history. Only eleven parties have suffered worse losses in seat share, and eight of them were governments that went down to defeat. Two others were governments that saw their caucuses reduced. Only one of them was an opposition party like the NDP.

Nine of those 11 leaders did not lead their parties into the next election or met defeat again if they did. Of those who stayed, Arthur Meighen narrowly won the 1925 election but failed to form a government that survived for any significant length of time. Lester Pearson was the only successful one of the bunch, staying for three more elections and winning two of them.

The drop in popular support experienced by the New Democrats under Tom Mulcair, to 19.7 per cent of ballots cast from 30.6 per cent in 2011, was the worst suffered by any party leader since 1993, when Progressive Conservative Kim Campbell and New Democrat Audrey McLaughlin led their respective parties to their worst-ever showings.

Both leaders were gone by the subsequent election in 1997.

Whereas Mulcair might have the example of Pearson to point to among those leaders who have done worse on seat share and still have success later in their political careers, he has no such examples among the seven who have dropped more popular support from one election to the next.

Fate of NDP predecessors no comfort

New Democrats like to say that the party does not have a history of devouring its own leaders. But just as the 2011 breakthrough for the New Democrats was like nothing that came before it, Mulcair's situation is also unusual.

However, there are some striking similarities to McLaughlin's experience in the 1993 federal election.

Like Mulcair, McLaughlin took over the New Democrats after the party had put up its best-ever performance to date (in 1988). And like Mulcair, during McLaughlin's tenure as leader the party was in contention for government in national polling between elections. 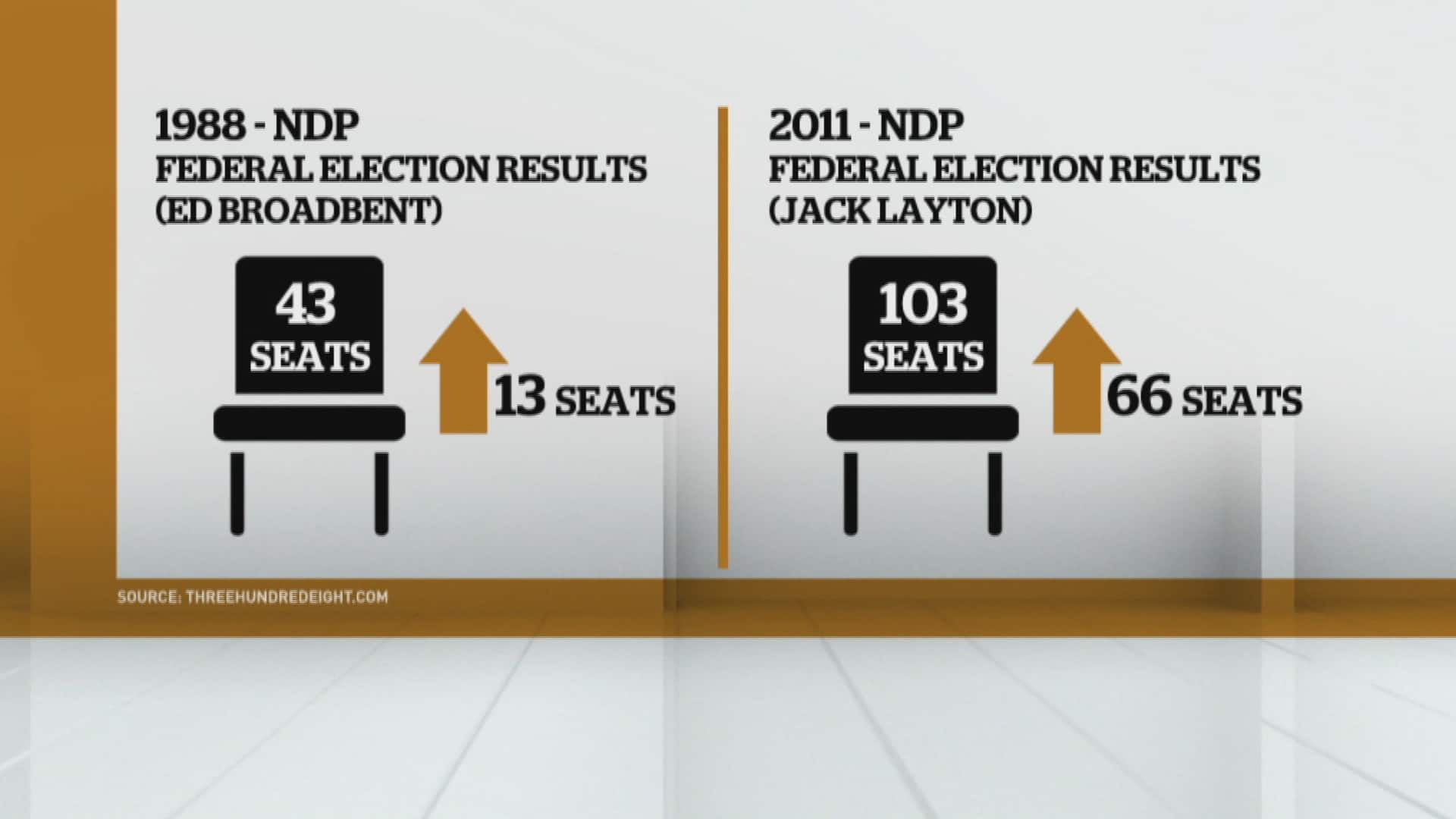 McLaughlin has been the only NDP leader to be given just one kick at the can. She dropped only 2.6 percentage points more in popular support in 1993 than Mulcair did in 2015 — but on seat share, Mulcair's loss was almost twice as great as McLaughlin's in 1993.

The oft-cited example of the party's patience, Jack Layton, is not a particularly good one for Mulcair. While he did get the opportunity to lead the party through four elections, three of which saw the party remain in fourth place in the House, in every election he improved both his party's vote share and seat totals.

Layton also managed to set the bar at between 89 and 98 per cent in the leadership reviews he faced.

But electoral performance has played a part in the departures of the NDP's previous leaders.

In 1997, Alexa McDonough improved on McLaughlin's performance from 1993. But McDonough was down in both seats and votes in 2000, and was out as leader a few years later.

When Ed Broadbent had marginally stumbled in 1984, he already had two campaigns of electoral gains under his belt. He was given one more shot, and put up the NDP's best performance at the time in 1988. But it was still a disappointment, considering that Broadbent's NDP led in national polls at one point. It was his last campaign as leader.

And Tommy Douglas presided over small shifts from one election to the next in his four campaigns as party leader. But he was one of the founders of the party, and in the one election when he lost both seats and votes, a minority government had been sent to Ottawa and the NDP held the balance of power.

Tom Mulcair would be an NDP outlier if he gets a vote of confidence from the party membership and so remains in his post. Audrey McLaughlin was the only other NDP leader to fail to improve the party's showing in his or her first attempt, and she did not last.

But perhaps Mulcair will buck the historical trend within his own party and hold on for another election.

He could buck the national historical trend as well, and end up a different kind of outlier like Lester Pearson. But the odds are stacked against him.