The four contenders for the Conservative leadership will debate each other in French today — but French-speaking party members won't be the only Conservatives grading their performance.

Canadians expect their leaders to be bilingual, even if they don't speak French themselves

The answer (and how honestly you answer it) could determine whether you can win the leadership of the Conservative Party of Canada and become the next prime minister.

The party will hold the first of two leadership campaign debates in Toronto today. It will be entirely in French. A debate in English will follow on Thursday. CBC News will carry the debate live online starting at 7 p.m. ET.

It's not clear how comprehensible the debate will be. While both O'Toole and MacKay can communicate in French, they do so with some limitations. Lewis and Sloan reportedly do not speak the language with any fluency. Nevertheless, the format will still have them debate each other in one-on-one match-ups.

In the end, the focus will be on the two front runners, MacKay and O'Toole. But the audience will be focusing on what they say as much as how they say it.

Both MacKay and O'Toole have been reaching out to Conservative Party members in Quebec.

O'Toole's platform has an extensive section specifically aimed at the province. The proposals emphasize respect for, and expansion of, Quebec's political jurisdiction and endorse limits on federal interference in the province's affairs.

The platform also includes promises to close the border crossing at Roxham Road, provide financial assistance for the 'third link' infrastructure project in Quebec City and ensure the party's next federal campaign in the province is run by a dedicated team in Quebec.

The O'Toole campaign clearly sees Quebec as an important part of its path to victory. The platform names Quebec 50 times; it cites Alberta nine times and Ontario just twice.

MacKay's campaign has not announced any Quebec-specific policies. A spokesperson says that in communications with party members and in media interviews, MacKay has outlined his support for equalization, infrastructure projects and respect for Quebec's jurisdiction. MacKay also recently tweeted a video about the work he is doing to learn French, aided by his multilingual wife, human rights activist Nazanin Afshin-Jam.

For all their efforts, however, it's not clear yet who has the edge in the province.

By one measure, MacKay seems to have the inside track.

Half of the ten MPs in the Quebec Conservative caucus have endorsed MacKay. They include Steven Blaney (who placed ninth in the 2017 leadership race) and Jacques Gourde — the only Quebec Conservative MPs elected in Stephen Harper's 2006 breakthrough in the province who are still sitting in the House of Commons today.

MacKay also has the backing of two Quebec senators, seven former MPs and senators from Quebec and most of the candidates who ran for the party in the province in the last election.

O'Toole has only one Quebec Conservative MP backing him (Richard Martel, first elected in a byelection in 2018), along with two former MPs and three sitting senators — although one of his supporters, former speaker of the Senate Leo Housakos, has considerable sway in the party's Quebec wing.

There is little to glean from the available fundraising data, as Quebec represented a tiny share of both MacKay and O'Toole's national fundraising. That O'Toole narrowly edged out MacKay is worth noting, however, considering that Quebec was the source of O'Toole's worst results on the first ballot of his unsuccessful 2017 leadership bid.

The allure (and the risk) of social conservatives in Quebec

Neither Lewis nor Sloan have any endorsements from current or former legislators in Quebec. But since the contest will be decided by a ranked ballot, their supporters are still being coveted by MacKay and O'Toole.

Together, Trost and Lemieux combined for just nine per cent of the vote in Quebec on the first ballot. But even that modest vote share could prove decisive this time. 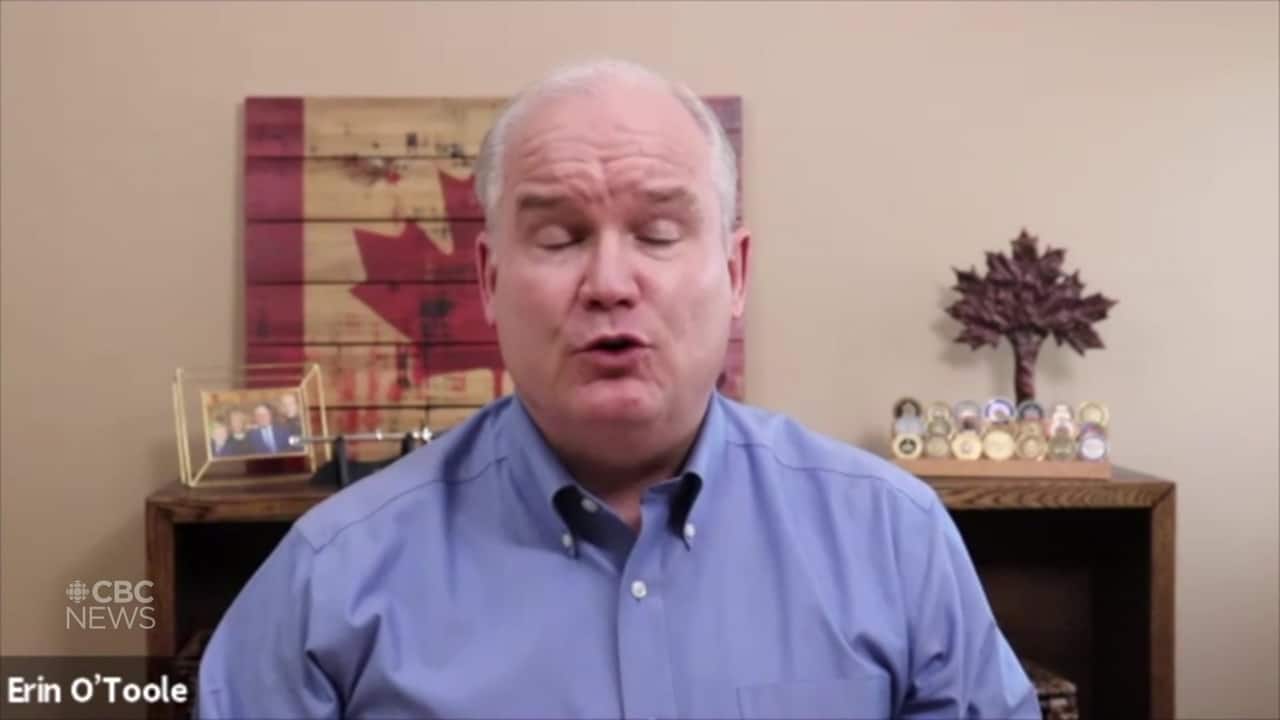 O’Toole says he has support of social conservatives, wants their 2nd place votes

9 months ago
0:29
Conservative leadership contender made the comments in French in conversation with social conservatives from Quebec. 0:29

That might fly with French-speaking social conservatives, but it's not the kind of message that is likely to resonate with the broader francophone population.

In January, a Léger poll found that 63 per cent of Quebecers felt that the ideal Conservative leader should not convey religious values, compared to just nine per cent who said he or she should. In the rest of Canada, the margin was 45 to 16 per cent.

The poll found similar proportions on other issues like abortion and same-sex marriage. Quebecers overwhelmingly — and in greater numbers than in the rest of the country — hoped the next leader would hold progressive views on these issues.

Which may explain why O'Toole tweeted his opposition to conversion therapy shortly after the video was made public — in French.

Not just speaking to Quebecers

Much of the debate undoubtedly will be focused on Quebec, though the candidates will not be addressing Quebecers only. There are French-speakers across Canada and four ridings outside of Quebec (three in New Brunswick and one in eastern Ontario) are majority francophone.

But being able to speak French isn't important just to those who speak the language daily. It's also seen in the rest of the country as a prerequisite for leadership of a national party.

While Léger found that 87 per cent of Quebecers believed that the next Conservative leader should be bilingual, 55 per cent of Canadians in the rest of the country also felt that way, as did about half of Conservative voters.

The poll found that the Conservatives could lose eight percentage points in support across the country with a leader who is not bilingual, with the steepest decline happening in Quebec.

This job requirement isn't limited to the Conservatives. Léger found that 92 per cent of Quebecers and 63 per cent of Canadians in the rest of the country said that being bilingual should be mandatory for a prime minister.

In other words, voters who don't speak French still expect their leaders to do so.

Bilingualism not an asset, but a requirement

That does make this debate a bit of a language test. While few English-speaking Conservative members are likely to tune in, many will be curious to know how each of the candidates performed.

As Scheer demonstrated in October's federal election, the bar for bilingualism (and striking the right tone) is high when it comes to debating French-speaking Quebecers like Prime Minister Justin Trudeau and Yves-François Blanchet, leader of the Bloc Québécois. Scheer's lacklustre performance in the French-language debates ended his party's hopes for a breakthrough in Quebec. Conservatives inside and outside the province are keen to prevent the same thing from happening in the next election.

All four of those elections were exceptional for one reason or another — the surge of the NDP in 2011, national landslides (including in Quebec) in 1958 and 1984, and a country split between Quebec and the rest of Canada over the question of conscription in the wartime election of 1917.

So the stakes in this French-language debate are high — votes in Quebec are worth their weight in gold — and it could play an important role in determining which of the four contenders emerges as the party's next leader.

But it might also give us our first real indication of whether any of them are serious candidates for the top job in the country.