Conservatives' path forward could lead through the centre

The Conservative merger in 2003 started the party on its path to government. But that was in the midst of a divided and disengaged electorate. Éric Grenier explains why the Conservatives may need to expand the base into the centre if they are to return to the halls of power.

More than a decade after uniting the right, Conservatives are back where they started

After merging the Canadian Alliance and Progressive Conservative parties over a decade ago, do the Conservatives now find themselves at Square 1 as they look for a path back to the government benches?

Uniting the right was enough to secure victory when the Liberals' support base disintegrated after 2004. But with the party under Justin Trudeau now well placed to corral the centre and centre-left vote, the numbers suggest that unless the next Conservative leader expands the party toward the middle of the political spectrum the Tories may find themselves in opposition for years to come.

Polling done by SES Research (now Nanos Research) throughout 2003 pegged the Liberals, then soon to be taken over from Jean Chrétien by Paul Martin and before their support was hollowed out by the sponsorship scandal, with an average of 49 per cent support. Peter MacKay's Progressive Conservatives followed at a distance with 17 per cent, while the Canadian Alliance under Stephen Harper stood at 13 per cent, tied with Jack Layton's NDP. Together, the PCs and Alliance combined for 30 per cent support.

Even in Canada's two largest provinces there were few differences between where the parties stand today and where they were before the Conservative merger, which was finalized in December 2003. The only significant difference is the Bloc Québécois, which had about twice as much support in 2003 as it does today. Many of those voters in Quebec have since gone to the NDP.

That these snapshots in 2003 and at the tail end of 2015 show such similarities is indicative of the danger the Conservatives may find themselves in. For throughout Chrétien's electorally successful tenure in office, the Liberals averaged roughly the same amount of support in polling (by Environics) as they have today — with the combined tallies of the PCs and Reform/Alliance averaging less than 30 per cent support.

The divided right certainly helped Chrétien win three majority governments between 1993 and 2000, but it was not the only — or arguably the major — factor leading to his victories. Instead, he won in part because he got the centre and centre-left to support him in large numbers and (more importantly) actually go out and vote. 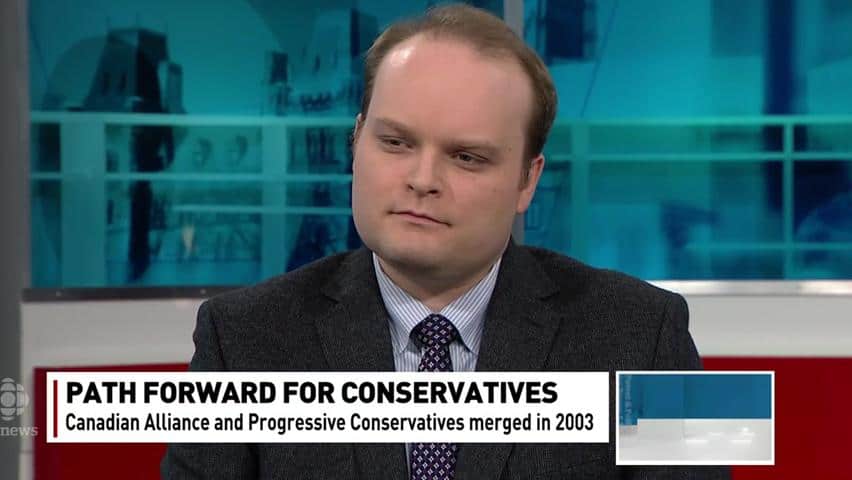 How can Conservatives unite the right?

The Conservatives cannot hope to win a future election without drawing a large number of centrist voters away from the Liberals, unless those centrist voters stay home. In fact, the Tory victories in 2006, 2008, and 2011 were in part won because of that.

With the exception of the 2004 election, the first for the Conservatives as a merged party, between 1993 and 2015 the Tories (or the combined total of their predecessor parties) captured the support of between 22 and 25 per cent of eligible voters. That is the Conservative base, and with a variation of only a few percentage points it has been counted on to turn out in election after election.

But that 22 to 25 per cent of all eligible voters (which includes those who do not cast a ballot) can only win an election for the Conservatives if the Liberals do not get their supporters out to the polls. Liberal support among all voters varied widely between 1993 and 2015, dipping as low as under 12 per cent in 2011 and soaring as high as 28 per cent in 1993. However, majority governments won by the Liberals in 1993, 1997, 2000 and 2015 came with the party capturing more of the vote among all eligible voters than the Conservatives captured in 2011, their high-water mark and only majority victory since the PCs under Brian Mulroney won the 1988 election.

The Conservatives could count on Liberal voters staying home in future contests, or enough of them moving over to the NDP to give the Conservatives a victory due to a split in the vote. But with the Liberals taking a decidedly progressive posture under Trudeau, the party is well positioned to corner the centrist and centre-left vote for the foreseeable future. The Liberal leader already has impressively high approval ratings among NDP supporters.

That leaves just one option for the Tories, and the next leader of the Conservatives would accordingly be wise to focus on chipping away centrist voters from the Liberals. Whether or not the party membership agree will be something to watch once the leadership race kicks off later this year.

But in the new political landscape, vote splits and micro-targeting are unlikely to be as important as they were during the Harper era. Unless the NDP gets itself back into contention or if the Liberals take themselves out of it, eventualities that the Conservatives have no control over, the key will instead lie in the centre.

The political right has been united in Canada for a little more than a decade now, but that right has only been large enough to win in a divided and disengaged democracy. The next leader of the Conservative Party, whoever he or she may be, would be taking a big gamble in betting on a return to those days.