The Green Party is entering this federal election with high hopes for its best performance ever — even though its national campaign director is only willing to describe his outlook as "cautiously optimistic."

The Green Party is entering this federal election with high hopes for its best performance ever — even though its national campaign director is only willing to describe his outlook as "cautiously optimistic."

"A lot can happen over the course of the campaign," Jonathan Dickie told CBC News. "But we've never been this strongly positioned going into a federal campaign in the past. In 2015, we were polling at about half this level."

According to CBC's Poll Tracker, an aggregation of all publicly available polling data, the Greens are sitting at 10.7 per cent support, just behind the New Democrats' 12.9 per cent.

Green Party Leader Elizabeth May kicked off her party's campaign in Victoria, B.C. today, calling the coming vote "the most important election in Canadian history." 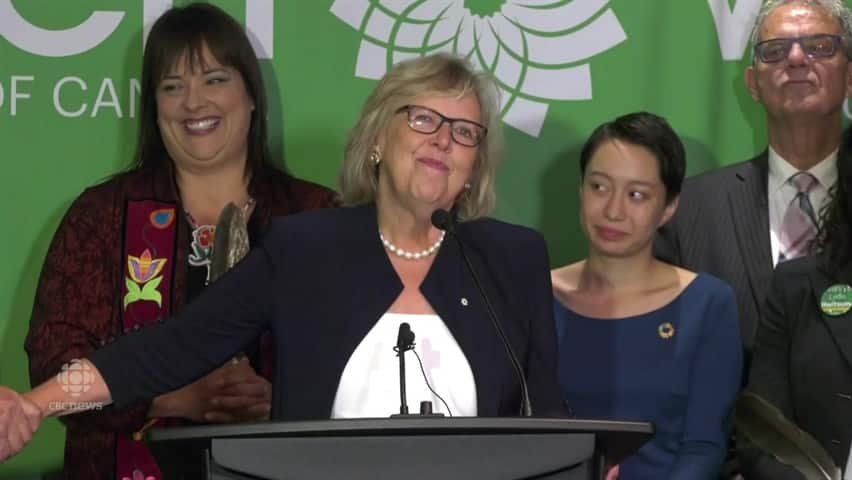 1 year ago
0:48
'This is the most important election in Canadian history," says Green Party Leader Elizabeth May. 0:48

"It's been petty, short-term, political considerations that clouded the thought processes of people who knew better," she said. "It's time for every so-called leader of every party to join us and accept the targets that are driven by science, not by politics — driven by courage, not by fear."

When May last led her party into a federal election in 2015, the NDP held the role of Official Opposition.

Now the Greens are in a real fight with the third-place federal NDP. The Greens have two federal seats and have secured one provincial seat in Ontario, three in each of New Brunswick and B.C. and eight in P.E.I. where the party has formed the Official Opposition.

They also have money this time. In the second quarter of this year, the Greens narrowly beat the New Democrats in fundraising, taking in $1.437 million in donations to the NDP's $1.433 million.

"We realize that we are doing fairly well compared with the past, with fundraising," said Dickie. "On the other hand, compared especially with the Conservatives and the Liberals, we have quite a modest war chest and we'll need to be quite strategic in where we spend that money."

Part of that Green strategy is to avoid going deeply into debt during this campaign — which could be important if the polls are correct and Canadians are leaning toward electing a minority government. Such governments sometimes fall, triggering snap elections.

"We want to run a strong campaign this time around, but we don't want to risk being in a difficult financial situation and have to fight another national campaign within a year or so on a weaker financial footing," Dickie said.

There will be television, radio and print ads, but the party also will be reaching out online to younger Canadians alarmed by the threat of climate change.

The Greens will not be chartering a campaign plane during the campaign, but will instead fly commercial and deploy campaign buses on Vancouver Island and in the Maritimes — regions where the party thinks it can make gains.

"We're realistic but we do see opportunities in a number of regions in Canada where we can elect MPs, and so we've been developing our strategy and our resources to target some particular ridings," Dickie said.

Dickie would not say which ridings will be getting extra attention, but said the strategy of targeting regions where the party feels it can make gains explains why May is kicking off her campaign today in Victoria, B.C., where she will be surrounded by candidates from Vancouver Island and the Lower Mainland.

CBC's Poll Tracker currently estimates the NDP is poised to take about 14 seats, just above the 12 needed to retain official party status. The Greens are expected to take just four seats federally — but the party's hope is to bump that number up to 12 by fighting a solid campaign.

"It's a possibility. It's probably towards the upper end of our range at this point. But it really, for us, changes as the polling numbers change, as we strengthen in certain regions," said Dickie. "In Atlantic Canada we're starting to see some steady improvement, so our numbers could grow."