The federal Greens established a historic foothold in Atlantic Canada on Monday night, but the party's attempt at a countrywide breakthrough didn't materialize.

Greens pick up seat in New Brunswick, but can't edge the NDP on Vancouver Island

The federal Greens established a historic foothold in Atlantic Canada on Monday night, but the party's attempt at a countrywide breakthrough bolstered by concerns about climate change didn't materialize.

The Greens hung on to both of their seats in British Columbia, with Leader Elizabeth May securing an easy win in Saanich-Gulf Islands with more than 40 per cent of the vote. Meanwhile, Paul Manly, who won an April byelection in Nanaimo-Ladysmith, also hung onto his seat.

But the biggest victory of the night came more than 4,000 kilometres away in Fredericton, where Jenica Atwin became the first federal Green candidate elected east of B.C.

"For the record books, this is the best result that any Green Party in any first-past-the-post system has ever had," May told supporters at her election night rally in Victoria.

May said the three Green members will be able to achieve results in the House of Commons. She suggested the Greens will also work closely with Independent member Jody Wilson-Raybould, a former Liberal cabinet minister, who was elected Monday in Vancouver.

"It's certainly a lot more than we could do with one seat in a majority Parliament, and I did a lot," said May, recounting her achievements after her first election in 2011.

"We are in a position of being the conscience of Parliament." 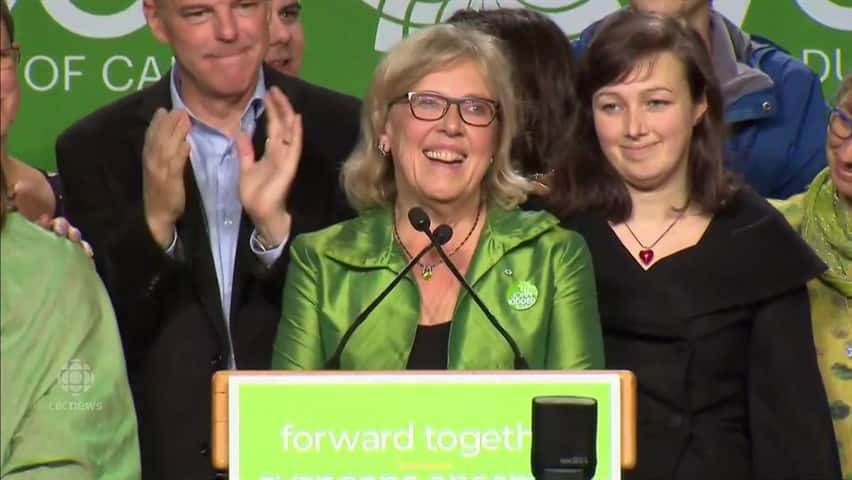 Greens will keep fighting, May says

1 year agoVideo
1:13
"We can make a really significant contribution in a minority parliament," Green Party Leader Elizabeth May says to supporters in Victoria, B.C. Greens picked up 3 seats in the 2019 federal election. 1:13

May spent considerable time campaigning in Atlantic Canada, where polling suggested the Greens could make significant inroads. The party's provincial counterparts in New Brunswick and Prince Edward Island have recently enjoyed surging popular support, and there was a sense that could translate to more Green MPs in Ottawa.

While that didn't happen, Atwin's victory in Frederiction amounts to a "rather amazing" development for the party going forward, said Donald Desserud, a professor of political science at the University of Prince Edward Island.

"There's something happening here, and it looks like there's a future for the Green Party in Atlantic Canada," he told CBC News.

"It will be interesting to see what happens now, because there is pretty clearly an emerging base of support here for the party."

While the Greens more than doubled their national vote share from the last federal election in 2015, the 6.1 per cent this time around was several percentage points lower than what polls throughout the campaign period suggested the party could potentially pull off.

The Greens also failed to increase their seat count on Vancouver Island, where May is popular and where she spent a lot of time and energy on the campaign trail. Other than her own riding and Manly's, the New Democrats swept the rest of the island, including several competitive seats the Greens had hoped to win.

"I think it was not the overall advancement that the Greens had hoped for," said Kathryn Harrison, a professor of political science at the University of British Columbia, of the night. She added that May and her Greens enjoyed considerable momentum coming into the campaign.

Manly's byelection win coincided with growing speculation that an exodus of progressive voters, disillusioned with the incumbent Liberal government, could turn to the Greens come election day.

Meanwhile, the Greens' signature issue of climate change was at the fore of public discourse. Polling firms consistently found it was a top-of-mind issue for many voters, and massive protest marches in cities across the world made headlines during the opening weeks of the campaign.

But May had trouble capitalizing on those circumstances.

"I think that it is probably very disappointing, given that this is the first election where there's been such a high level of attention to climate change," Harrison said.

Both Harrison and Desserud pointed to "missteps" on May's behalf, particularly early on, that may have derailed her early momentum.

First came confusion about the party's official position on abortion, which led to the campaign "re-vetting" several candidates who had expressed anti-abortion views in the past.

Then came questions over Pierre Nantel, a high-profile candidate who insisted he is a Quebec sovereignist even after May had repeatedly said he wasn't.

As the controversies played out, May struggled to sharpen her message, Desserud said.

"Voters are less forgiving about that when it comes to smaller parties. They are asking people to make a leap of faith and vote for them, even though they have no real chance of forming government," he said.

"In that sense, small mistakes can have significant consequences."

Now, the Greens will have to look to the future. May suggested Monday that this election would be her last as the Green leader.

"I've never made any bones about the fact I want succession planning," she said. 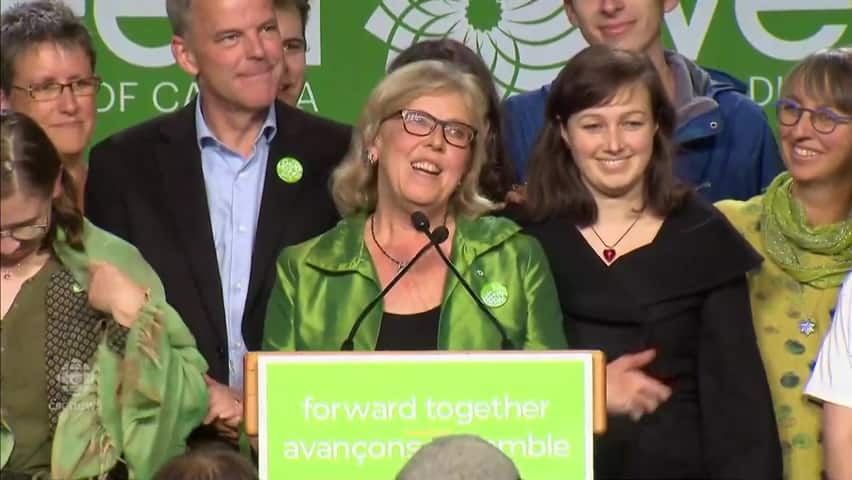 1 year agoVideo
9:06
Green Party Elizabeth May speaks to a crowd of supporters on election night in Victoria, B.C. 9:06