Johnston was referring to his comment during an interview with CBC Radio's The House Saturday. "We're a country based on immigration, going right back to our, quote, Indigenous people, unquote, who were immigrants as well, 10, 12, 14,000 years ago," he said.

A firestorm of criticism on social media ensued as some said the comment revealed a deep-seated colonial mentality.

On Monday, he addressed the controversial remark during his opening statement in Ottawa.

And I want to clarify a miscommunication. Our Indigenous peoples are not immigrants. They are the original peoples of this land.

"The better country we desire is above all a more inclusive one that supports, encourages and acknowledges the contributions of all peoples, including Indigenous peoples, the original peoples of this land.

"Let me apologize for not expressing myself correctly on this matter recently. Indigenous peoples are the original peoples," Johnston said. 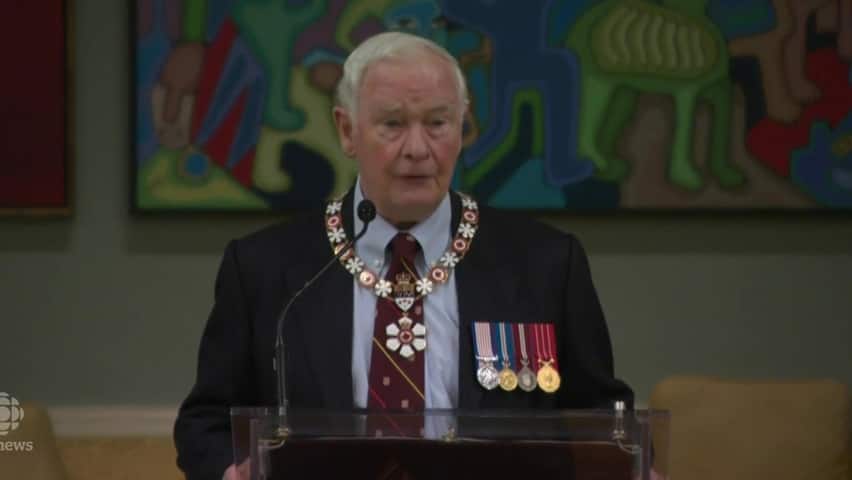 4 years agoVideo
0:38
Governor General David Johnston apologizes for a statement he made on CBC Radio's The House, where he said that Canada "is a country based on immigration going right back to our quote indigenous people unquote." 0:38

Some 30 recipients, including Mohawk activist Sylvia Maracle and Tragically Hip frontman Gord Downie, were honoured at Rideau Hall, as Johnston handed out honours such as the Order of Canada, the Meritorious Service Decorations (Civil Division), the Polar Medal and the Sovereign's Medal for Volunteers.

Some of the recipients are well known, including actress and former Liberal MP Tina Keeper and Inuit NHL player Jordin Tootoo, while others have been change makers in their communities outside the national spotlight, including Jarret Leaman, who has supported LGBT Indigenous youth, Imelda Perley, an Indigenous languages teacher from St. Mary's First Nation in Fredericton, N.B, and Chief Bill Cranmer, from Alert Bay, B.C., who has sought to recover potlatch artifacts confiscated by the Canadian government in the 1920s. (The government instituted a ban on the ceremonies as they were seen as an impediment to assimilation.)

Others, including Hovak Johnston and Marjorie Tahbone, were celebrated for protecting Indigenous cultural practices by reviving traditional Inuit tattoo art and reconnecting Inuit women with an art form that was "on the verge of being lost."

The three commissioners of the Truth and Reconciliation Commission — Wilton Littlechild, Senator Murray Sinclair and Marie Wilson — were also honoured by Johnston with the meritorious service award for shouldering the responsibility of the commission "with fortitude, compassion and perseverance." Sinclair was not in attendance and was to receive his honour at a later date.

"Over six years, they led the examination of the Indian residential school system, combing through myriad documents and witnessing the courage of survivors who shared their stories. Their final report invites all Canadians to confront the inequities of the past, and calls on governments and individuals alike to move forward, with greater understanding, towards reconciliation."

Actor Tom Jackson, a past recipient of the Order of Canada, brought Prime Minister Justin Trudeau and his wife, Sophie Grégoire Trudeau, to tears after the formal ceremony with a moving call to action to improve the standing of the country's Indigenous people.

Pointing at the Canadian flag, Jackson told the crowd that he believes the Maple Leaf is his "sister." 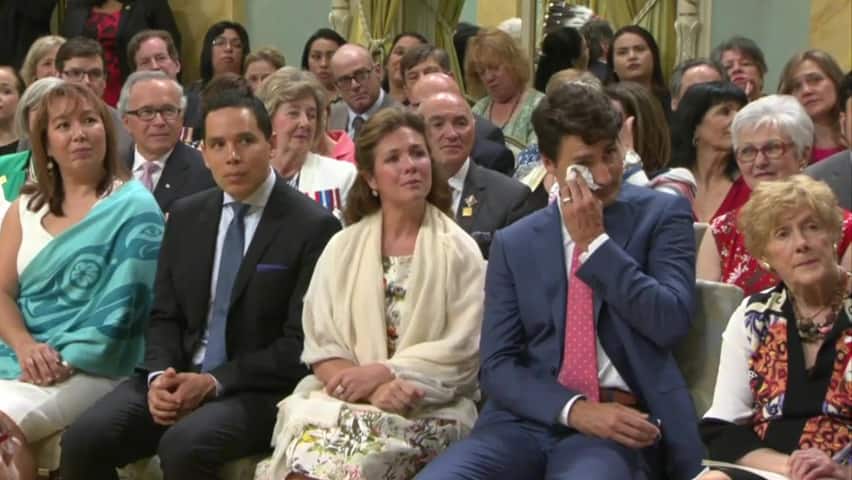