Canada plans to send a couple of military observers to Crimea, Ukraine, to assist in the safeguarding of human rights. 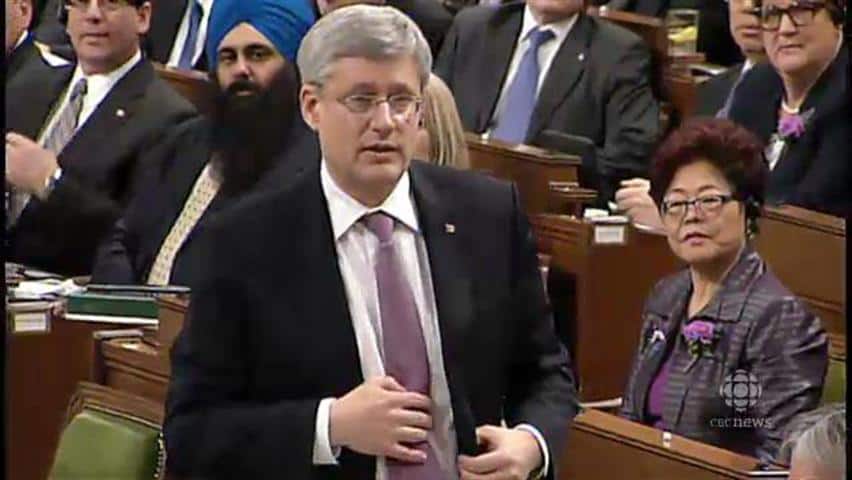 Harper on observers for Ukraine

7 years ago
0:54
Prime Minister Stephen Harper told MPs Canada will send observers to Ukraine and will impose sanctions on the former Yanukovych regime. 0:54

Canada plans to send a couple of military observers to Crimea, Ukraine, to assist in the safeguarding of human rights.

In the House of Commons during question period, Prime Minister Stephen Harper said, "Canada will contribute observers to an important military observer mission in a co-ordinated effort to better monitor the Russian military mission in Crimea."

Two Canadians will be part of the Organization for Security and Co-operation in Europe mission.

The pair are already in Europe and are on their way to Ukraine. On Tuesday, U.S. Secretary of State John Kerry called on Russia to allow observers and said the U.S. wants to see large numbers of them in Crimea.

In response to a question from Opposition Leader Tom Mulcair, Harper said he has told the prosecutor-general of Ukraine that Canada will be imposing economic sanctions on members of the ousted regime of former president Victor Yanukoych. That will include the freezing of assets held in Canada of corrupt Ukrainian officials.

The government will also be suspending Canada's participation in the Canada-Russia Intergovernmental Economic Commission, established to promote economic relations between Canada and Russia.

Harper went on to say talks are taking place with the International Monetary Fund and Canada is "prepared to collaborate with them."

Harper did not mention whether Canada will be offering financial aid to Ukraine. On Tuesday, Kerry announced that the U.S. will provide $1 billion in loan guarantees to Ukraine, and today the European Union pledged $15 billion if Ukraine is able to work with the IMF.

Harper's office issued a statement Wednesday saying the prime minister had spoken to Donald Tusk, prime minister of Poland, whose country borders Ukraine. The two leaders agreed on the importance of respecting Ukraine’s territorial integrity and that any violation of Ukraine’s sovereignty is unacceptable, the statement said.

Mulcair wouldn't do anything 'terribly different'

Mulcair, appearing on CBC News Network's Power & Politics, said if he were prime minister, he wouldn't do anything "terribly different" than Harper.

Mulcair told host Evan Solomon the NDP might "perhaps leave more openings for dialogue" but he praised Harper for not responding to calls to expel the Russian ambassador and thus allowing "back channels"  to Moscow to be accessible.

Asked about Foreign Affairs Minister John Baird's comparison of Russia to Nazi Germany when it occupied Sudetenland, Czechoslovakia, in 1938, followed by a similar analogy from Harper about the Second World War, Mulcair said the situation in Ukraine "doesn't compare ... so far."

He asked, if that analogy was accurate, "Why are we sending our paralympian athletes to Sochi?"

Mulcair also said he has been keeping in close contact with Harper during the Ukraine crisis.

Meanwhile, Liberal MP Chrystia Freeland, who is in Ukraine on behalf of the Liberal Party, is tweeting her progress in meeting community leaders and members of the government in Kyiv.

She had lunch with Rabbi Yaakov Bleich, chief rabbi of Kyiv, she tweeted. He told her he'd met with United States Secretary of State John Kerry the day before and had proposed that the G8 countries hold their upcoming meeting in Kyiv, in solidarity with the people of Ukraine.

Seven countries in the G8, including Canada, have told Russia they will boycott a planned meeting in Sochi.

Freeland, who speaks Ukrainian and Russian and is staying with her uncle in Kyiv, also met with Mustafa Dzhemilev, leader of the Crimean Tatars and an MP. Crimean Tatars are Muslim and there are over 200,000 of them in Crimea, currently occupied by the Russian military.

She met with Vitaly Klitchko, leader of the Udar Party and a candidate in the presidential election being held in May. He was a well-known heavyweight boxing champion before he retired from the sport.

Freeland also met with Ukrainian MP Petro Poroshenko whom she says speaks Russian. Poroshenko is known as the Chocolate King because of his candy empire. A billionaire, he was a cabinet minister in the Yanukovych government. The ousted Yanukovych is pro-Russian, but Poroshenko is an advocate of Ukraine joining the EU.