Justice Minister Rob Nicholson said today he will bring in changes next year to ensure public safety is paramount in deciding on release for high-risk mentally-ill offenders who are found not criminally responsible for their actions. 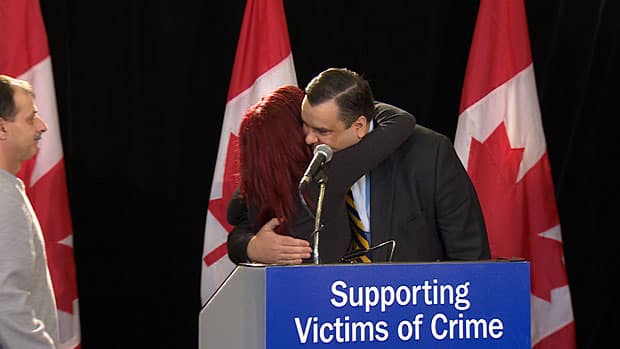 8 years ago
2:41
Proposed legal changes would make it harder for mentally ill killers to be released 2:41

High-risk mentally-ill offenders who are found not criminally responsible for their crimes will have a harder time getting released from custody under changes to the Criminal Code to be introduced next year.

At a news conference Thursday, Justice Minister Rob Nicholson did not specify what the changes would be, but said the changes will take into account the possible threat to the safety of the public and victims' requests for greater involvement in the process of release or the lifting of conditions imposed on the convicted.

Nicholson said the legislation he expects to introduce next year will ensure public safety is paramount in decisions by courts and review boards about releasing high-risk mentally ill offenders into society.

Victims' rights groups have been lobbying for years for changes about how such offenders are released, and are particularly bothered by the mandatory yearly review that assesses whether a person found not criminally responsible for murder is eligible for day passes or day parole.

Relatives of people killed by the mentally ill feel they must attend every review and essentially relive the murder of their loved ones. They also question whether mentally ill killers are released from custody too easily.

Nichoson made the announcement in Montreal with Senator Pierre-Hugues Boisvenu, whose daughter was kidnapped, raped and murdered in 2002. Boisvenu is a strong victims' rights advocate.

"Victims deserve to be better informed and be more involved in the process," said Boisvenu in a statement that accompanied Thursday's announcement.

People who commit a crime while mentally ill are neither found guilty nor acquitted, Nicolson said. They are found not criminally responsible and may be confined to a mental institution, or discharged into the community, with conditions, but they are not sent to prison.

The justice minister said his provincial and territorial counterparts have requested the federal government take action.