In a new Power & Politics feature, ex-PBO Kevin Page says the government failed to live up to its own promises 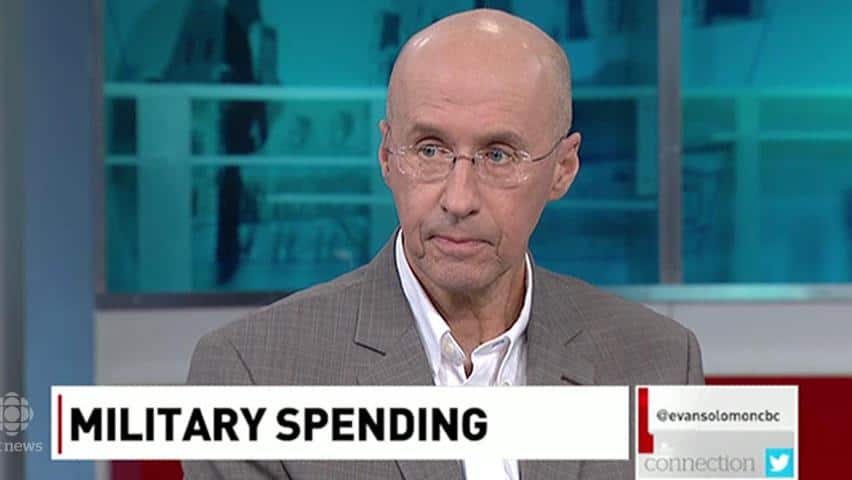 As Canada gets set to deploy 200 troops to help Ukraine's military in its fight against Russian-backed rebels, Canada's former parliamentary budget watchdog gives the Conservative government a barely passing grade for its defence spending.

In his inaugural Money Page segment for CBC News Network's Power & Politics, Kevin Page says the government has been unable meet its own expectations of boosting military spending and giving the troops the hardware they need, adding "spending in real terms is even lower than when they came into office in 2006."

"[The mark] has to be something like a D, D+," Page told host Evan Solomon. "As a result of the expectations that were raised... you have to give them a very weak mark."

The promise to usher in a new era of military spending occurred under the watch of then-defence minister Peter MacKay, some six years after former chief of the defence staff Rick Hillier coined the phrase "decade of darkness" to denounce the previous Liberal government's military cuts.

"We won't see our military return to the difficult years of Liberal governance," MacKay wrote in a 2013 op-ed piece. "Our government remains committed to delivering a modern, multi-role, combat-capable Canadian Armed Forces able to respond to current and future challenges."

For the first three years of its tenure, the Conservative government increased defence spending, but then it began to cut back.

"What we found is that we're still in the age of darkness," Page said, comparing Conservative military spending to previous administrations.

Another way of comparing the Conservatives' military spending to that of previous administrations is by looking at the cash outlay as a percentage of GDP, Page said.

Here, too, the Conservatives come up short compared to the targets set out in their Canada First Defence Strategy, which promised "stable and predictable defence funding."

But a look at the Harper government's defence spending suggests predictability has been difficult to achieve in the wake of budget cuts and the government's determination to balance the budget so it can offer tax breaks.

In 2013, Peter MacKay said his government was succeeding in procuring equipment and preparing Canada's troops where the Liberal Party had "failed and failed again."

But this spending has not lived up to expectations, Page said. It's still an open question when, or if, the government will buy fighter jets to replace the aging CF-18s that are nearing the end of their shelf life. And it was only recently that the government finally announced it was asking companies to bid on a contract to replace search-and-rescue aircraft that the auditor general warned in 2013 needed replacing.

Since 2006, much of the money set aside for equipment went unspent. According to Power & Politics' analysis of the Public Accounts, National Defence has allowed about $9.6 billion in funding to lapse over this period.

"We're asking Parliament for the money. Parliament is authorizing the money, and the government is still not spending it," said Page. "National Defence is becoming a source of funds to reduce the deficit.