The government's cannabis bill faces outright defeat in the Senate today if it can't secure enough support from members of the Red Chamber.

The government's cannabis bill faces outright defeat in the Senate today if it can't secure enough support from members of the Red Chamber.

According to an agreed timetable, senators will hold a vote at second reading of the bill today. If the opposition Tories cobble together enough votes to defeat C-45, the legislation would be effectively dead — meaning the government would have to restart the entire legislative process in the House.

If that happens, a summer timeline for legalization becomes much less likely.

Most Independent and Liberal senators generally support the bill, and together they hold 54 of the chamber's 93 occupied seats. But that doesn't guarantee that all of those members will vote together as a block or be present when the vote is recorded.

New senators have been appointed as Independents — leaving the Liberal government with no mechanism to whip votes or force them to attend sittings in the chamber.

Moreover, two Senate committees are on the road: members of the agriculture committee are meeting with stakeholders in Calgary, while the Aboriginal peoples committee is in Winnipeg. That means as many as 20 senators — most of them Independent — will be out of the mix today when a vote is held. Others, like Independent Quebec Sen. Jacques Demers, are not expected to be in attendance because of illness.

The 33 Conservative senators generally vote in lockstep on government legislation, since they all still sit as members of a national party caucus.

Government sources, speaking on background, suggest they have enough support from Independent senators to win the vote. But the slim margin is ringing alarm bells on the government side, as only a few absences could derail a key government policy.

When asked if the government has a plan B ready in the event the bill is defeated, a spokesperson for Justice Minister Jody Wilson-Raybould said the minister still expects the legislation to face a final vote in the Senate on or before June 7, a timeline the Senate leadership agreed to last month.

"The minister has been following the Senate's debate on C-45 since it came to that place last November. She looks forward to appearing before the Senate Standing Committee on Legal and Constitutional Affairs as part of the 'pre-study' of certain aspects of the legislation," the spokesperson said.

Peter Harder, the Liberal government's point-man in the Senate, said Thursday morning he simply wasn't sure he had the votes to get the bill over the line today.

"I am never assured how any vote in the Senate will unfold and, therefore, it would be presumptive of me to predict. What I can tell you is that Conservative senators have said they will be voting against this," he said. "This is a serious vote on a very important bill." 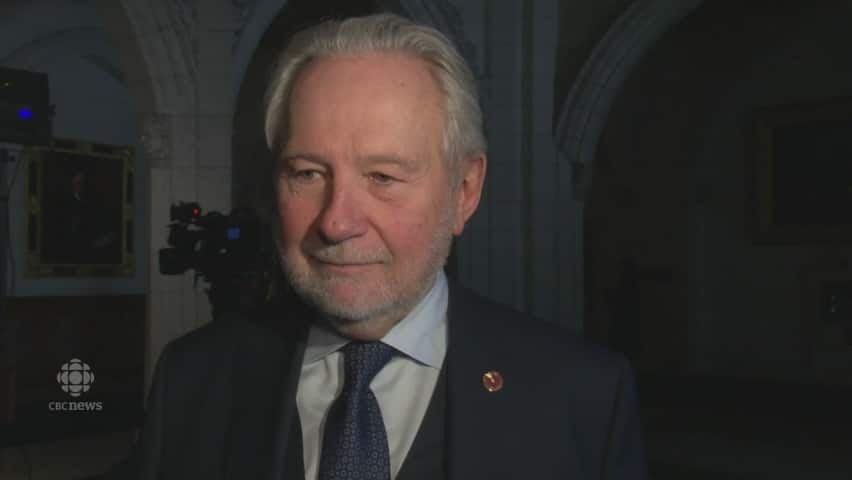 3 years ago
1:07
Peter Harder is the government's representative in the Senate 1:07

Conservative senators have delivered scathing condemnations of the legislation that will legalize the recreational use of cannabis in this country.

Tory senators say they worry the legislation will endanger youth, increase smoking rates, complicate the work of police officers, lead to a backlog of court cases for possession offences and do little to curb black market sales of the drug. 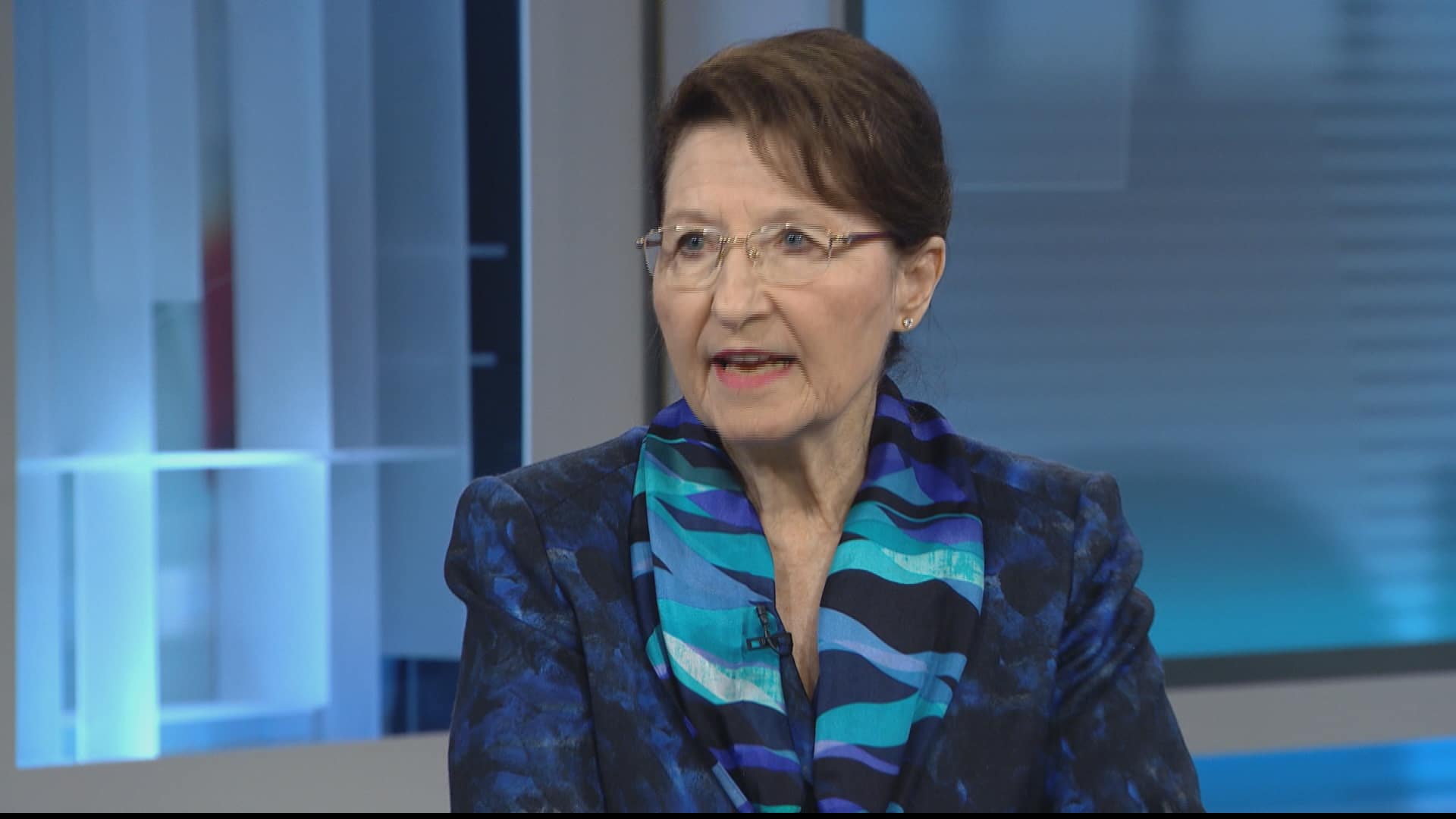 "Driven by a self-imposed, artificial political deadline of implementation by this summer, the Trudeau government has hastily assembled Bill C-45 and its companion impaired driving legislation, Bill C-46," Conservative Saskatchewan Sen. Denise Batters said in a speech to the chamber on Tuesday.

"Both bills are shoddily constructed and raise a myriad of unanswered questions that will lead to unintended and devastating consequences.

"Honourable senators, this is too high a price for Canadians to pay simply to satisfy Prime Minister Trudeau's political ambitions. For all of these reasons, I will vote against Bill C-45 at second reading."

Batters is not alone. At least six other Conservative senators have vowed publicly to vote against the bill, arguing the Liberals are pushing ahead with a massive societal change under a constrained timeframe.

"We, the select few with sober second thought, should not consider saying 'yes' to this odious legislation until we, on behalf of all Canadians, have all the answers. I believe that, at a minimum, an intensive four-year education blitz should begin now before any government contemplates legislation," Conservative Alberta Sen. Betty Unger said.

"The rush is incomprehensible," she said. "Within the space of a year we have gone from debating supervised heroin injection to pushing cannabis use nationwide.

"I'm not sure Canadians want Canada to be known for its liberal drug laws."

The bill's defenders — including its sponsor in the Senate, Independent Ontario Sen. Tony Dean — say the government does not have the luxury of time. They say illegal cannabis use — a $7 billion industry that funnels funds into the hands of organized crime, according to government figures — will continue unabated without the benefit of federal regulations.

Harder has made an impassioned plea to appointed senators to debate legislation thoroughly and propose amendments if necessary — but to hold off on defeating government bills that implement promises made in the last election.

The defeat of a government bill at such an early legislative stage is rare.

If a bill is defeated in the Senate at second reading, nothing further happens to it. The Senate moves on to the next item on the order paper and the bill, in effect, is dead.

The government could then introduce a similar bill, but it would need to be an entirely new piece of legislation and not simply a revival of the old one.

"If the motion for second reading is defeated, the bill dies and cannot be reintroduced in the same session, since reintroduction would be contrary to the decision of the chamber and a violation of the same question rule," says the Senate Procedure in Practice (SPIP), the chamber's guidebook.

The "same question rule" is a basic principle of parliamentary procedure that demands "that a house should not consider the same matter a second time in the same session if it has already made a decision on it," according to SPIP.

So any new legislation would have to be different enough to be admissible.