'We are less as a country': Politicians pay tribute to Gord Downie

Politicians are paying tribute to Canadian icon Gord Downie following his death, praising him as a musical legend, loving man and strong advocate for reconciliation with Indigenous people. 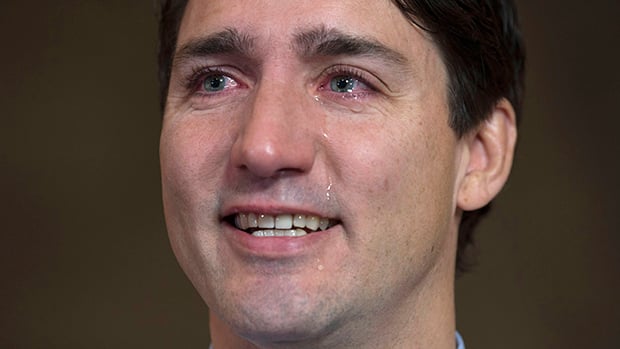 3 years ago
1:18
PM Justin Trudeau reacts to the death of his friend, the lead singer of The Tragically Hip, Gord Downie who passed away overnight. 1:18

The Tragically Hip frontman died Tuesday night at age 53. He was diagnosed with an aggressive and incurable form of brain cancer in 2015.

Tears flowed from an emotional Prime Minister Justin Trudeau‏ as he delivered a statement today on Parliament Hill.

"We are less as a country without Gord Downie in it," he said.

Calling him a friend and an icon, Trudeau said Downie cared deeply about his country and about "every hidden corner, every story" in it.

"And he wanted to make it better. He knew as great as we were, we needed to be better than we are. And that's why his last years were devoted to Chanie Wenjack and to reconciliation. This is something I have certainly drawn inspiration and strength from."

Trudeau said while everyone knew Downie's death was coming, they hoped it was not.

"It hurts," he said, his eyes red as tears streamed down his face.

Trudeau ordered the flags on the Peace Tower on Parliament Hill and at all federal government buildings in Downie's hometown of Kingston, Ont. to be lowered to half-mast until sunset on the day of the funeral or memorial service.

Downie spent his final months advocating for reconciliation with Indigenous people. His multimedia project, Secret Path, tells the tragic story of 12-year-old Chanie Wenjack, who died of exposure and hunger in 1966 after running away from the Cecilia Jeffrey Indian Residential School in Kenora, Ont.

In a concert broadcast live on CBC on Aug. 20, 2016, Downie praised Trudeau for his commitment to Indigenous people in the North.

"We're in good hands, folks. Real good hands," he told the estimated 11.7 million viewers. "He cares about the people way up north. That we were trained our entire lives to ignore."

He called on the prime minister to address Canada's historical mistreatment of its Indigenous people and to "get 'er done," and asked the audience to hold Trudeau, who was among the concert-goers, to account in fixing the problems.

Several MPs delivered statements paying tribute to Downie in the House of Commons on Wednesday, and members stood united in a solemn minute of silence in honour of the "late, great Gord Downie" before the daily question period.

"Your musical legacy and strong advocacy will always live on," she tweeted.

Gord Downie, you are and will always be one of our greatest Canadian icons. Your musical legacy and strong advocacy will always live on.

Downie was honoured for his work for Indigenous people by National Chief Perry Bellegarde, who presented Downie with an eagle feather last year. He was given a Lakota spirit name, Wicapi Omani, which can be roughly translated as "Man who walks among the stars."

Today, Bellegarde mourned Downie's passing on Twitter, calling him an "ally and a friend."

In an interview with CBC News, Bellegarde said Downie was a powerful influence as a non-Indigenous celebrity pushing for reconciliation and greater awareness about the impact of residential schools. He helped raise public education and government action that will continue on.

"Even though Gord has passed on, his legacy will live on through his work," Bellegarde said.

Downie was appointed to the Order of Canada this past June, hailed for his music as well as his social activism: "promoting dialogue, raising awareness of the history of residential schools and moving the country along the path to reconcilation."

"He dazzled us with his lyrics, his passion and his thoughtfulness until the very end," she tweeted.

Our hearts break on news of the passing of Wicapi Omani, “Walks Among the Stars”, Gord Downie an ally &amp; friend. <a href="https://t.co/9gPIdX1qrO">pic.twitter.com/9gPIdX1qrO</a>

Conservative Leader Andrew Scheer said Downie's music brought Canadians together and that he will remain a legendary figure in the country.

So sad to hear of Gord Downie's passing. His music brought Canadians together, and he’ll forever be a legendary figure in Canada. <a href="https://t.co/CKhx1gMyOD">pic.twitter.com/CKhx1gMyOD</a>

Conservative MP Tony Clement called Downie a "Canadian original with a great big heart." In a statement in the House, he called Downie the "true poet of the Canadian experience," chronicling life, love, joy, justice for more than three decades.

"His sense of social justice was legitimate and his passion burned bright," he said.

NDP Leader Jagmeet Singh thanked Downie for being an inspiration to many.

"Gord Downie is a legend who transcended entertainment and showed us all what courage in the face of adversity looks like," he said on Twitter.

NDP MP and musician Charlie Angus said he was heartbroken to learn of Downie's death, tweeting: "He wasn't just an amazing artist he was caring loving guy who knew a better world was possible." 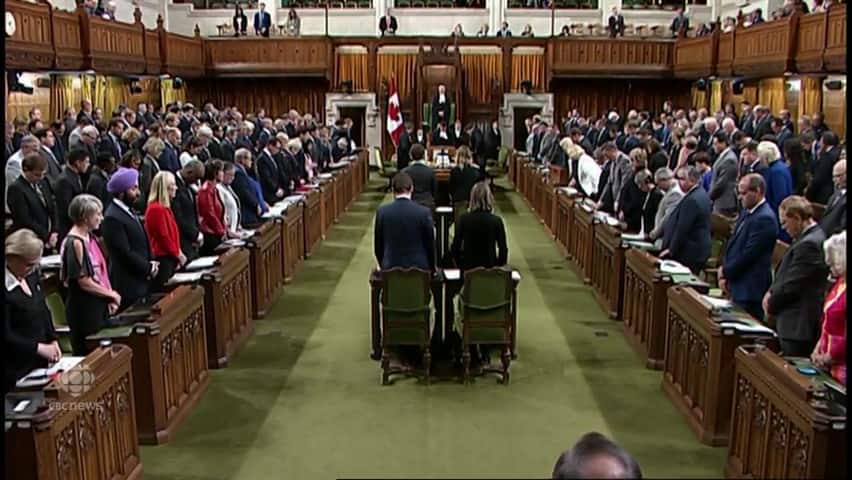 3 years ago
6:14
Parliamentarians remember the lead singer of The Tragically Hip. 6:14

'Soundtrack of our nation'

In a statement later in the House, he said the Tragically Hip, with lyrics created by Downie, formed the "soundtrack of our nation" with songs that were "profoundly intimate and profoundly Canadian."

"He wasn't just an incredible artist, he was a decent, loving human being who believed the world could be a better place," he said. "And in the face of his own mortality he took his suffering and brought our nation on a journey of reconciliation and justice."

Kingston, Ont., Liberal MP Mark Gerretsen called him one of the greatest musicians of our time, but said he will be remembered for much more than his talent.

"Perhaps what is most remarkable about Gord is that he chose to use his fame to build up others," he said, recalling how he advocated for Indigenous rights while battling his own health issues.

Heartbroken to hear of death of Gord Downie. He wasn't just an amazing artist he was caring loving guy who knew a better world was possible

Toronto Mayor John Tory announced on Twitter that the Toronto sign in Nathan Phillips Square be lit in red and white to honour Downie and will be dimmed at 11 p.m. ET to mourn the "great Canadian."

Ontario Premier Kathleen Wynne‏ said she spoke for all people in the province in saying she is heartbroken by the news.

"With Gord Downie's passing a piece of Canada has died," she tweeted.