The prime minister's top adviser has taken to Twitter to defend a cabinet minister and to criticize those questioning her family history. Gerald Butts called out the Globe and Mail for an editorial about Maryam Monsef, comparing questions it raised to the American "birther" movement.

The prime minister's top adviser is comparing questions about Maryam Monsef's family history to the racially charged "birther" movement in the United States.

Gerald Butts, principal secretary to Justin Trudeau, used social media to make the link between criticism of the Liberal cabinet minister and a campaign that falsely claimed that U.S. President Barack Obama was not born in America.

Butts specifically called out the Globe and Mail on Wednesday evening after it published an editorial about Monsef online. The editorial appeared in Thursday's newspaper.

He also alluded to race being a factor in the overall questioning and criticism of Monsef that has taken place mostly online.

"Canada's full of people whose parents & grandparents were a little loose about their birthplace. My gramma was at times Polish, Ukrainian … Czech or Russian. My dad's family was the artfully termed *Scotch-Irish*. Funny how nobody asked them questions. Wonder why?" Butts tweeted Wednesday night.

Butts continued to engage on the topic on Twitter on Thursday.

Last week, Monsef acknowledged that she was born in Iran, not Afghanistan, as she had long claimed.

The minister says she only learned the truth from her mother after the Globe and Mail's Ottawa bureau chief Robert Fife started asking questions about her family history.

"My mother never talked about the unspeakable pain that conflict and terror inflicted on her. This week, my sisters and I asked her to relive that pain," Monsef said in a statement.

In Thursday's editorial, the Globe calls on Monsef to offer up a fuller explanation as "the story she has told so far is incomplete."

"The implication in Ms. Monsef's story is that her mother was the sole keeper of this family secret. But it is clear that others knew or claimed to know otherwise, which is how Ms. Monsef came to be asked about this matter in the first place." 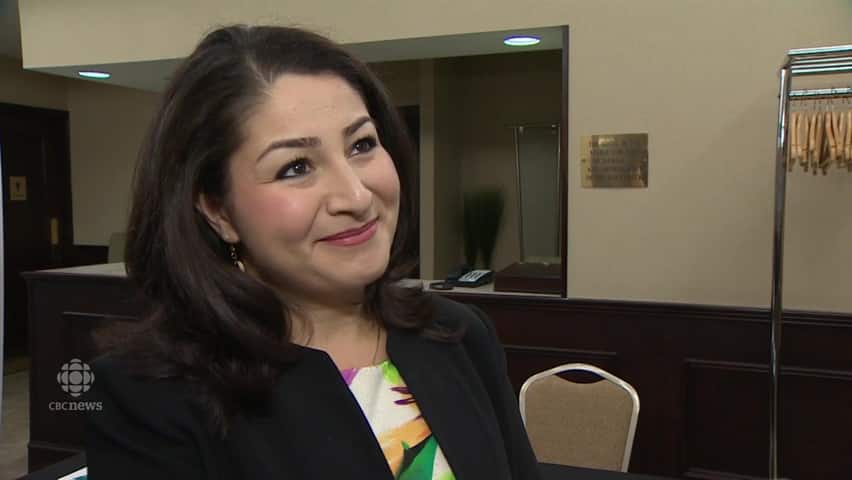 4 years ago
0:58
Minister of Democratic Institutions Maryam Monsef answers questions about her birthplace in Halifax on September 23. 0:58

Last Friday, CBC News asked the minister about how this story became public, and whether other people knew of her family history.

"I think that is a conversation that is best held with the Globe. I found out mostly when they did," Monsef replied.

CBC News asked for clarification on what Monsef meant by "mostly."

"I was referring to learning first of the matter from Mr. Fife's inquiry, and then putting the question to my mother who confirmed these details to me. I have been very forthcoming about this experience with Canadians and these details were all covered in the Globe story," Monsef later said in a statement.

Columnists and academics alike are weighing in on whether Monsef's past is worthy of public discussion.

"Maryam Monsef is an Afghan, a Canadian, a refugee and a survivor of one of the most brutal civil wars of the modern era. Nothing about her story is even remotely controversial or unusual,"  Aisha Ahmad, a senior researcher at the Global Justice Lab at the Munk School of Global Affairs, told the University of Toronto News.

Maclean's Terry Glavin wrote "just how would being born among Iran's viciously oppressed Afghan refugees at a time of pitiless barbarism somehow diminish the poignancy of the circumstances surrounding Monsef's childhood and her eventual flourishing on the Canadian federal scene, or make her any less Afghan, or any less a refugee, or any less deserving of sympathetic notice as a refugee success story?"