After an opening day dominated by trade talk, Prime Minister Justin Trudeau shifted the G7 conversation to other pressing global issues on Saturday — climate change and empowering women — but at least one leader opted to skip part of the day's meetings.

After an opening day dominated by trade talk, Prime Minister Justin Trudeau shifted the G7 conversation to other pressing global issues on Saturday — climate change and empowering women — but at least one leader opted to skip part of the day's meetings.

U.S. President Donald Trump left La Malbaie, Que., early, before G7 leaders were scheduled to have a working session on protecting the world's oceans and redoubling efforts to stave off catastrophic climate change.

But Trump caused a stir even before his early departure by arriving late for the gender-focused breakfast session, billed by Canadian officials as a chance for leaders to draft "concrete actions for the G7 to advance gender equality and women's empowerment.

Trudeau had welcomed everyone to the session, and Isabelle Hudon, Canada's ambassador to France, was making opening remarks when Trump walked into the room with his officials and members of his press pool. French President Emmanuel Macron gestured to Trump to his seat at the rectangular table — across from Macron's own place — and then winked at the U.S. leader.

As Trump quietly took his place between Christine Lagarde, head of the International Monetary Fund, and Lt.-Gen. Christine Whitecross, the Canadian head of the NATO college in Rome, Trudeau restated his welcome and Hudon repeated her remarks. 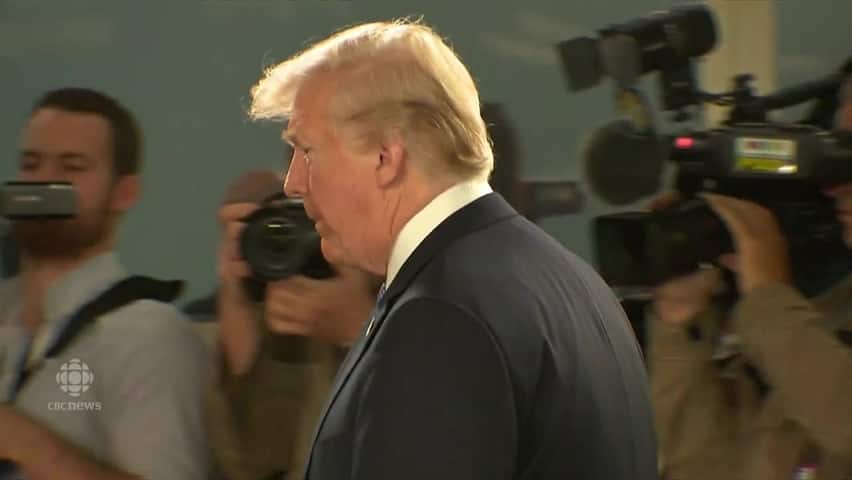 3 years agoVideo
0:37
U.S. President Donald Trump showed up late to this morning's working breakfast on empowering women. Justin Trudeau had completed his opening remarks, and the co-chair of the meeting was in the middle of her remarks when Trump arrived. 0:37

Trudeau appointed the Gender Equality Advisory Council — co-chaired by Hudon and Melinda Gates, co-chair of the Bill and Melinda Gates Foundation — to advise him on recommendations to make at Saturday's meeting with other world leaders.

The council suggested, among other things, funding for "developing and conflict-affected countries" to improve access to a minimum of 12 years of free, safe and quality "gender-responsive education."

Trump ducked out mid-morning to begin his nearly 20-hour journey to Singapore where he is expected to meet with North Korean leader Kim Jong-un on June 12, a tete-a-tete designed to encourage the rogue state to end its nuclear program.

Before his departure, Trump held a wide-ranging press conference, in which he repeated his position that Canada and other U.S. trading partners must eliminate trade barriers, including supply management for Canada's dairy sector, if they hope to achieve new trade deals with the United States.

At most G7 summits, the assembled leaders generally sign off on a communique committing their respective countries to a series of objectives.

With Canada as president of this summit, Trudeau and his "sherpas" — negotiators in the language of global forums — have settled on five broad themes for this year:

A senior Canadian official, speaking to reporters on background Friday, conceded the U.S. has been non-committal about putting its signature on a final communique but they will not let U.S. intransigence derail the agenda.

It's a potentially embarrassing development for the Canadians, and a sign Trudeau couldn't persuade all his G7 counterparts to embrace unity.

But, until recently, G7 summits didn't have to contend with the likes of Trump, who has made it a hallmark of his presidency to reject the established orthodoxy.

Last year at the G7 summit in Italy, Trump and his officials balked at some of the language relating to global efforts to address climate change — the leaders could not produce a consensus statement that Trump would sign — a move that foreshadowed his eventual withdrawal from the Paris climate change accord a week later.

"I won't prejudge the outcome of the negotiations and discussions that are still happening. Our sherpas are working around the clock, extremely hard, that hasn't changed. There are disagreements with the U.S in particular on a number of issues but we've been really realistic about that from the very beginning," the government official said.

"The objective is always to reach a consensus as much as possible but not to gloss over any really significant differences that we're unable to resolve," they said.

Trump himself said Friday, "I think we'll have a joint statement," when asked if the leaders could come to an agreement.

After the U.K.'s recent push to have Commonwealth countries sign on to a single-use plastics ban — things like straws and coffee stirrers — G7 leaders will also discuss the proliferation of plastics in the world's oceans.

Canada will advocate for a "plastics charter" at the summit, a Paris-style agreement for the cleanup of ocean garbage and to divert the eight million tonnes of plastic that enter the world's oceans each year.

Environment Minister Catherine McKenna has said the charter will focus on a high-level policy approach that includes targets for reducing the amount of garbage in the world's oceans, that asks individual nations to come up with domestic plans to meet those targets, works with industry to develop less harmful products, and which funds developing nations to create better waste disposal systems to keep plastics from ending up in the water.

Also expected Saturday, sessions with so-called "outreach countries," countries not part of the G7 but invited by the host nation for discussions on ocean and coastal protections. Trudeau invited:

Following that working session, Trudeau will meet with small island developing states, countries grappling with immediate impacts of global warming — and a group of nations which could also be called upon to back Canada's bid for a UN Security Council seat.