Officials at the Group of 20 summit say leaders haven't reached an agreed statement on climate change — one of the most contentious topics at the talks after the U.S. said it would withdraw from the Paris climate agreement.

Officials at the Group of 20 summit say leaders haven't reached an agreed statement on climate change — one of the most contentious topics at the talks after the U.S. said it would withdraw from the Paris climate agreement.

European Union officials who briefed reporters on draft final statement say the document contained a general commitment to fighting climate change, and then a separate paragraph that "took note" of the U.S. decision to withdraw.

A third paragraph then affirmed the support of the 19 other members for the Paris deal. The officials spoke on condition of anonymity to discuss the draft before it's agreed.

Officials debated language pushed by the U.S. in which it proposed to help other countries use fossil fuels more cleanly. That ran into objections.

The two were meeting on the sidelines of the summit in Hamburg.

U.K. Prime Minister Theresa May said she is "dismayed" by the U.S. decision to withdraw from the climate deal.

Prime Minister Justin Trudeau told reporters climate change was one of the topics he addressed in his meetings with U.S. President Donald Trump over the weekend.

"I emphasized that this is something that matters deeply to citizens and impacts directly on our economic growth now and into the future," he said. "This is the narrative that we have been sharing around the G7 in Taormina and it was enthusiastically supported by just about everyone around the table here at the G20."

Trudeau added that, although the U.S. has chosen to go in a different direction, the vast majority of the "disparate" G20 countries affirmed a commitment to battle climate change, while still improving the economy.

He compared the U.S. decision to federal inaction on global warming under the previous Conservative government.

"But in the absence of federal leadership on climate change, our provinces, our municipalities, our big cities, and businesses, entrepreneurs, stepped up," Trudeau said.

"So, I think that we can look at the global community holding together so strongly on the topic of climate change is a credit to the G20 and to be quite frank, a credit to Chancellor Merkel's excellent leadership that kept us focused on what really matters."

Trump's chief economic adviser played down tensions between the U.S. and other nations as the president headed home from his first G20 summit.

Gary Cohn told reporters aboard Air Force One that there was nothing unexpected about seeing "a diversity of opinions in a group of 20."

"To get 20 of your friends to agree to have dinner tonight is pretty hard," Cohn said.

G20 host German Chancellor Angela Merkel says the summit achieved "good results in some areas" despite a logjam with the United States over climate change.

Merkel said the two days of discussions that ended Sunday had at times been "difficult" and that "I can only call things as they are."

She pointed to a hard-won agreement on trade, one in which she said "every word was weighed."

EU officials said G20 leaders agreed to keep their markets open to foreign trade. But the group's draft statement also says trade needs to be "reciprocal and mutally advantageous" and countries can take steps to protect their markets.

The language on trade keeps the traditional G20 condemnation of protectionism, or keeping out foreign competitors with unfair import taxes or regulations. But countries also agreed to fight "all unfair trade practices" and recognize "legitimate trade defence instruments." The officials spoke on condition of anonymity to discuss the draft text before its release.

Trade has been a hotly discussed issue at the summit, as U.S. President Donald Trump pushes his "American First" agenda. Trump has focused on making trade fair as well as free and has criticized trade relationships where the other countries sell more to the U.S. than they buy.

Merkel said after the first day of meetings in Hamburg on Friday that discussions on trade were very difficult and that differences on climate change were clear.

Saturday's sessions come after a second night of trouble elsewhere in Hamburg, as rioters set up street barricades, looting supermarkets and attacking police with slingshots and firebombs. Hundreds of officers went into buildings in the Schanzenviertel neighborhood to arrest troublemakers. 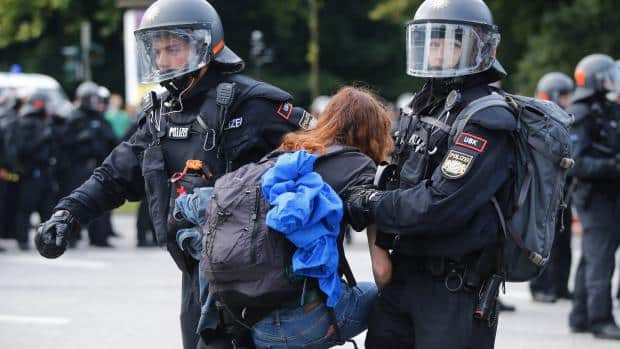 Security forces in Hamburg use water cannon on protesters