NDP Leader Tom Mulcair pushed back against attacks from all sides during the French-language leaders' debate, which had tempers flaring on topics ranging from the Senate, national unity and the right to wear the niqab.

5 party leaders battle over issues including the economy, the Senate and the question of the niqab 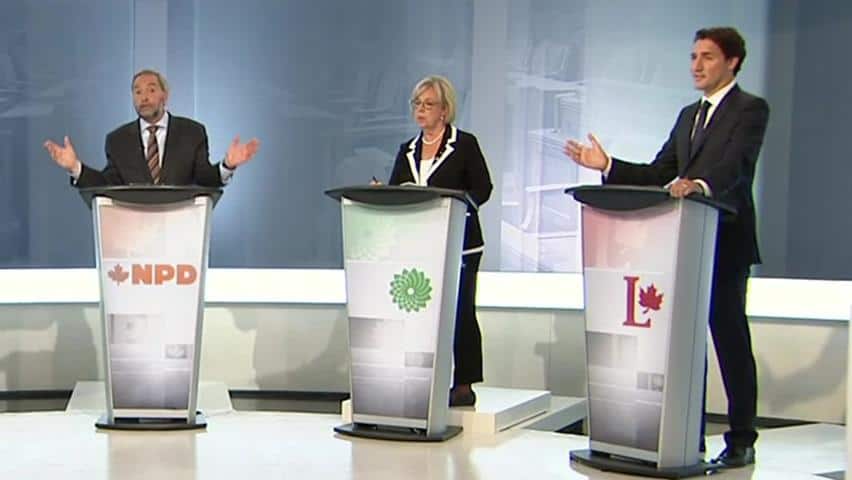 NDP Leader Tom Mulcair pushed back against attacks from all sides during the French-language leaders' debate Thursday night, which had tempers flaring on topics ranging from the Senate, national unity and the right to wear the niqab.

Mulcair, whose party's lead may be shrinking in Quebec, was on the defensive on issues including the environment and referendum politics.

Bloc Québécois Leader Gilles Duceppe pressed the NDP leader, who goes by Tom in English but Thomas in French, on his views on oilsands.

The BQ leader cited comments that Mulcair had made in French and in English on the topic, suggesting they were contradictory.

"I'd like to know if Tom talks to Thomas from time to time," quipped Duceppe.

​Meanwhile, Trudeau  attacked Mulcair on the NDP's support for a bill that would recognize a sovereigntist referendum victory, even if it were by a majority of 50 per cent plus one. Trudeau argued that the Supreme Court has ruled that one vote would not be enough to separate from the rest of Canada and accused Mulcair of supporting 50 per cent plus one for a French audience but not for English Canada. But Mulcair shot back that he trusts Quebecers with the normal rules of democracy.

"Mr. Trudeau says it will take much more than a simple majority, but he refuses to say how much," Mulcair said.

Some of the most pointed exchanges of the night centred on the issue of the niqab and whether government services should only be given to those who reveal their faces.

Mulcair accused Conservative Leader Stephen Harper of raising the issue of the niqab as a distraction rather than dealing with troubling economic questions.

"Mr. Harper is trying to hide his record behind a niqab," Mulcair said.

"Mr. Mulcair, I will never tell my young daughter that a woman should cover her face because she's a woman," Harper said.

"Tackle the oppressor if you believe that there is oppression there," Mulcair shot back, adding that Harper was using  the issue as a "weapon of mass distraction."

The controversy over the niqab was inspired by a recent court ruling saying a woman can wear the face veil while taking her Canadian citizenship oath. The Conservatives want to fight the decision before the Supreme Court.

Duceppe said it wasn't a divisive question in his province, saying Quebec's National Assembly and mayors of major cities, as well as most Quebecers themselves, were in agreement that the niqab shouldn't be allowed in these scenarios. He said it was a question of equality for men and women.

Both Trudeau and Green Party Leader Elizabeth May said they supported the right of women to wear the niqab.

The NDP plan to abolish the Senate provoked a split as Mulcair argued that the Red Chamber is passé. He said he wanted a mandate from Canadians to work with the provinces to get rid of what he called a sinecure for old Liberals and Conservatives

Harper said his own plan not to nominate any new senators while waiting for the provinces to reach consensus about how to reform the Senate was the best approach.

However, Trudeau pointed out that Harper had broken his own pledge not to nominate senators 59 times. He added that constitutional negotiations are not a priority for Canadians.

Duceppe chimed in that the way to get past the Senate debate was for Quebec to become its own country.​

Canada's relationship with Saudi Arabia also came under scrutiny during the debate. Canada signed a $15-billion deal to sell to military vehicles to the country. But the debate hosts asked whether Canada should consider sanctions that would include stopping those sales in light of Saudi Arabia's plan to behead a man who was arrested as a teenager for protesting during the Arab Spring.

Mulcair said it was important to oppose barbaric practices as punishment and Trudeau said Canada should work with allies so that countries show more respect for human rights.

However, Duceppe directly challenged Harper on why military sales continued, even while it was believed the Saudis were helping ISIS.

Harper responded that Saudi Arabia was an ally.

Harper said his government had always denounced human rights abuses, but suggested that didn't mean the military deal should be sacrificed.

"But it's not right to punish workers in a factory in London, [Ontario] for this. It doesn't make sense."

On the economy and infrastructure investment, Trudeau's plan was attacked by the other leaders.

The Liberals say they would spend $125 billion over the next 10 years on infrastructure, about twice what the Conservatives have planned. However, to fund it the Liberals have announced three years of deficit spending before a plan to balance the budget in 2019. Harper and May argue over the Trans-Pacific Partnership

5 years ago
1:24
Conservative leader Stephen Harper and Green leader Elizabeth May spar over the Trans-Pacific Partnership trade deal during the French language debate. 1:24

Mulcair accused Trudeau of placing debt on the backs of future generations. Trudeau said that Canadians were living with the cost of an infrastructure gap now when they are stuck in traffic. He accused his opponents of wanting to balance the budget at any price.

Harper said his party was as already making historic investments without increasing taxes or planning deficits.

"Mr. Harper put everything on oil," Duceppe charged. "His economic plan rests on oil, essentially, with the consequences we see now."

The debate focused on five themes: