Freeland expected to go to D.C. for late-game NAFTA talks as political pressure ramps up

Foreign Affairs Minister Chrystia Freeland is expected to go to Washington this week for late-stage talks with U.S. Trade Representative Robert Lighthizer on the fate of NAFTA, CBC News has confirmed.

U.S. reportedly eager to see an agreement-in-principle in time for Peru summit meeting this month

Foreign Affairs Minister Chrystia Freeland is expected to go to Washington this week for late-stage talks with U.S. Trade Representative Robert Lighthizer on the fate of NAFTA, CBC News has confirmed.

The window for reaching a deal on a renegotiated NAFTA is becoming increasingly narrow, with both the U.S. and Mexico facing potentially fractious election campaigns that could derail the talks.

CBC has not confirmed that Freeland will be meeting with her Mexican counterparts, who are also in Washington for meetings with the Trump administration this week.

The high-level discussions come as new signs of progress have emerged from the negotiations.

Bloomberg News reported Monday that U.S. President Donald Trump is eager to see an agreement-in-principle on NAFTA in time for the Summit of the Americas meeting in Peru later this month.

A senior source, speaking to CBC News on the condition of anonymity, suggested an agreement-in-principle could be reached in the coming weeks.

"Americans are being more positive, more constructive than they have been in the last eight months," the source said. "Canada is quite prepared to roll up its sleeves to get something done, but Canada won't roll over."

While an agreement-in-principle could be in reach, the finer details of the legal text might take much longer to nail down.

Negotiators from Mexico and Canada have been expecting an eighth round of NAFTA talks to start next week in Washington, during which aspects of a final deal could be settled.

Some observers monitoring the talks closely suggest the idea of concluding an agreement in principle in time for the Peru summit is a product of wishful thinking.

"Even under the best circumstances, if these three countries were holding hands and skipping through the fields, it would still be almost impossible to do it in two weeks," said Laura Dawson, director of the Canada Institute at the Wilson Centre in Washington.

Dawson told CBC's Power and Politics that, based on her conversations with Canadian and Mexican negotiators, she believes "they're though about 30-40 per cent of a really difficult, really complicated negotiation.

"And the standard is, you do the easy stuff first. All of the hard work has been back-end loaded, so we're looking at months and months more of negotiations," Dawson added.

"Nothing real can happen in two weeks."

Trump talked down the deal Tuesday ahead of a working lunch with Baltic state leaders. Speaking to reporters at the White House, he claimed NAFTA has been a "cash cow" for Mexico and threatened to pull out the deal if the country couldn't stop a caravan of Honduran migrants from approaching the U.S.-Mexico border. 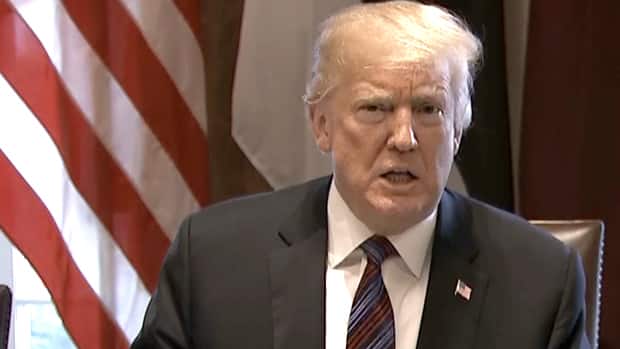 "They have to do this, otherwise I'm not going to do the NAFTA deal," he said of his request that Mexican officials intercept the Central American migrants.

"NAFTA has been great for Mexico. It has not been good for the United States. A lot of businesses have closed down because of NAFTA.  You look at empty plants all over the place — and this is from years ago — and they still haven't recovered. NAFTA has been a terrible deal for the United States. We're renegotiating the deal right now, but it will still be good for Mexico and for Canada."

But the senior source suggested pressure from U.S. agricultural interests on the Trump administration — which is facing new tariffs from China in the wake of Trump's trade standoff with the Asian nation — could encourage the Americans to put pen to paper on a deal.

U.S. farmers have benefited greatly from NAFTA. U.S. agricultural exports to Mexico and Canada were worth $8.9 billion in 1993, before the agreement kicked in. Today, they're worth $39 billion and account for 30 per cent of America's farm exports.

A number of states with influential farm lobby groups — namely Missouri, Indiana and South Dakota — are facing key elections this fall, with a number of Senate seats up for grabs.

In late February, Canada's Ambassador to the U.S., David MacNaughton, said he believed NAFTA negotiators could reach an agreement by the end of March.

At the time, MacNaughton said progress had been made on the "wiring and plumbing" of the agreement to the point where all three countries could iron out their differences on the more substantial issues in the subsequent two months.