Finance Minister Chrystia Freeland delivered an emphatic defence today of the use of fiscal stimulus and deficit spending to sustain the Canadian economy through what she called the "coronavirus recession" — and promised to rein it in only after widespread vaccination brings the virus under control.

Ending emergency spending too early would be a mistake, Chrystia Freeland says ahead of expected fiscal update 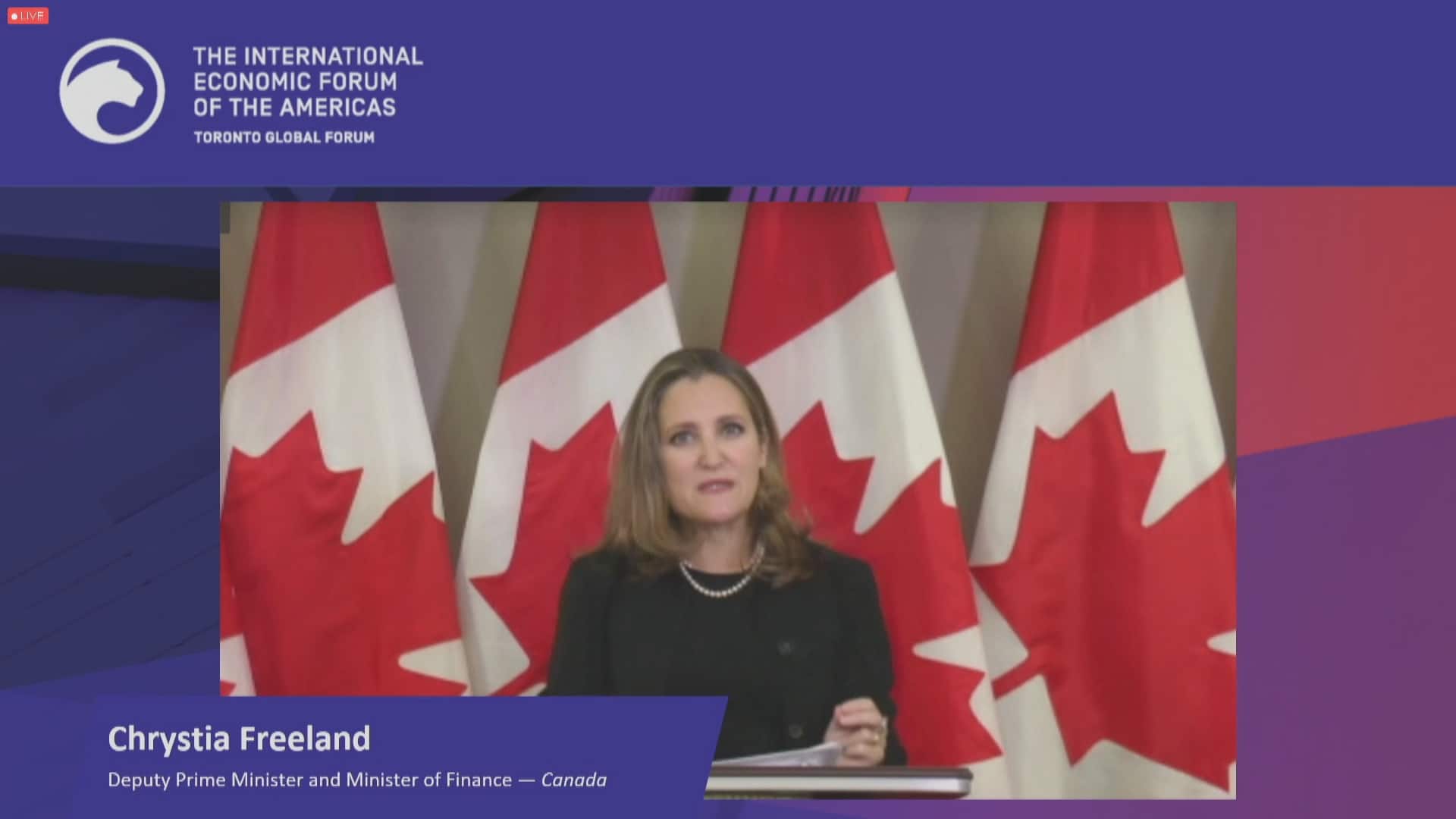 Finance Minister Chrystia Freeland delivered an emphatic defence today of the use of fiscal stimulus and deficit spending to sustain the Canadian economy through what she called the "coronavirus recession" — and promised to rein it in only after widespread vaccination brings the virus under control.

Speaking virtually to the Toronto Global Forum, Freeland argued the federal government can afford to continue spending on emergency support programs for businesses and individuals and that ending them too early would imperil the eventual economic recovery.

"We have a moral imperative, but also a hard economic imperative … to fight the coronavirus with all our might, and to provide our people and our businesses with a bridge to get through to the other side," Freeland said.

"We will need to provide meaningful investment to build our way out of the coronavirus recession, and to ensure our economy comes roaring back stronger than before."

Freeland was the keynote speaker for the final day of the three-day event, which brought together politicians, business leaders and academics from around the world to exchange views on global economic issues.

Rather than outlining any new policy measures or detailed fiscal targets, the finance minister's speech laid out the principles guiding the government's decision-making ahead of an expected fall update on the state of federal finances. Freeland said the government's recovery plan will focus building an economy that is green, innovative and fair.

Her remarks amount to the latest signal that the Liberal government plans to continue spending on support programs and key policy priorities even in the face of deficit levels not seen since the Second World War.

Freeland argued that Canada has the fiscal capacity to afford continued pandemic spending because its debt-to-GDP ratio remains lower than it was in the 1990s — when the country faced a debt crisis — and because of historically low interest rates.

She added that Canada's debt-servicing costs are also much lower than they were during that crisis.

"We remember the fiscal shock of the 1990s, when Canada flirted with insolvency," said Freeland. "The reality is that, today, the prevailing global economic environment is changed entirely. In fact, not one of the factors that drove the fiscal crisis of the 1990s holds true today."

Freeland's speech took place on the same day the Bank of Canada released a new report predicting the country's economy won't fully recover what was lost to the pandemic until 2022.

The bank's monetary policy report estimates the economy will shrink by 5.7 per cent this year, but grow by 4.2 per cent next year and 3.7 per cent in 2022.

Opposition politicians have accused the Liberals of a lack of transparency when it comes to how much is being spent on emergency programs.

The Liberals haven't tabled a full budget since March 2019. The last detailed update came in the form of a one-year "fiscal snapshot" tabled by then-Finance Minister Bill Morneau in July. It estimated the federal government's budget deficit would hit $343.2 billion this year — but it was delivered before the Liberals made a series of costly changes to benefit programs that are sure to drive that number up.

Freeland said she'll have more to say soon on the rules and limits the government will impose on itself in the near future.

"We will resume the long-standing, time-tested Canadian approach, with fiscal guardrails and fiscal anchors, that preceded this pandemic," Freeland said.

In a recent report, the office of Parliamentary Budget Officer Yves Giroux estimated that the size of the debt compared to the size of the domestic economy — which had been the Liberals' preferred fiscal anchor — could be around 48 per cent this year and next.

The debt this year is expected to push past $1.2 trillion.