Freeland, NAFTA and the fate of the free world

Foreign Affairs Minister Chrystia Freeland's stirring defence of liberal democracy in Washington got her glowing headlines. But what happens in the NAFTA talks matters far more than Donald Trump's next tweet.

On Wednesday night, in the capital of that "shining city on the hill," Chrystia Freeland worried aloud about the fate of the free world.

In some way, small or large, that fate might be affected by what Freeland did on Thursday morning when, with American tariffs bearing down on the Canadian economy, she returned to the work of renegotiating NAFTA.

"Tonight, I would like to speak about a challenge that affects us all, and I believe worries us all," Freeland said Wednesday in Washington, DC, where she was accepting Foreign Policy magazine's award for 'diplomat of the year.' "And that is the weakening of the rules-based international order and the threat that resurgent authoritarianism poses to liberal democracy itself." 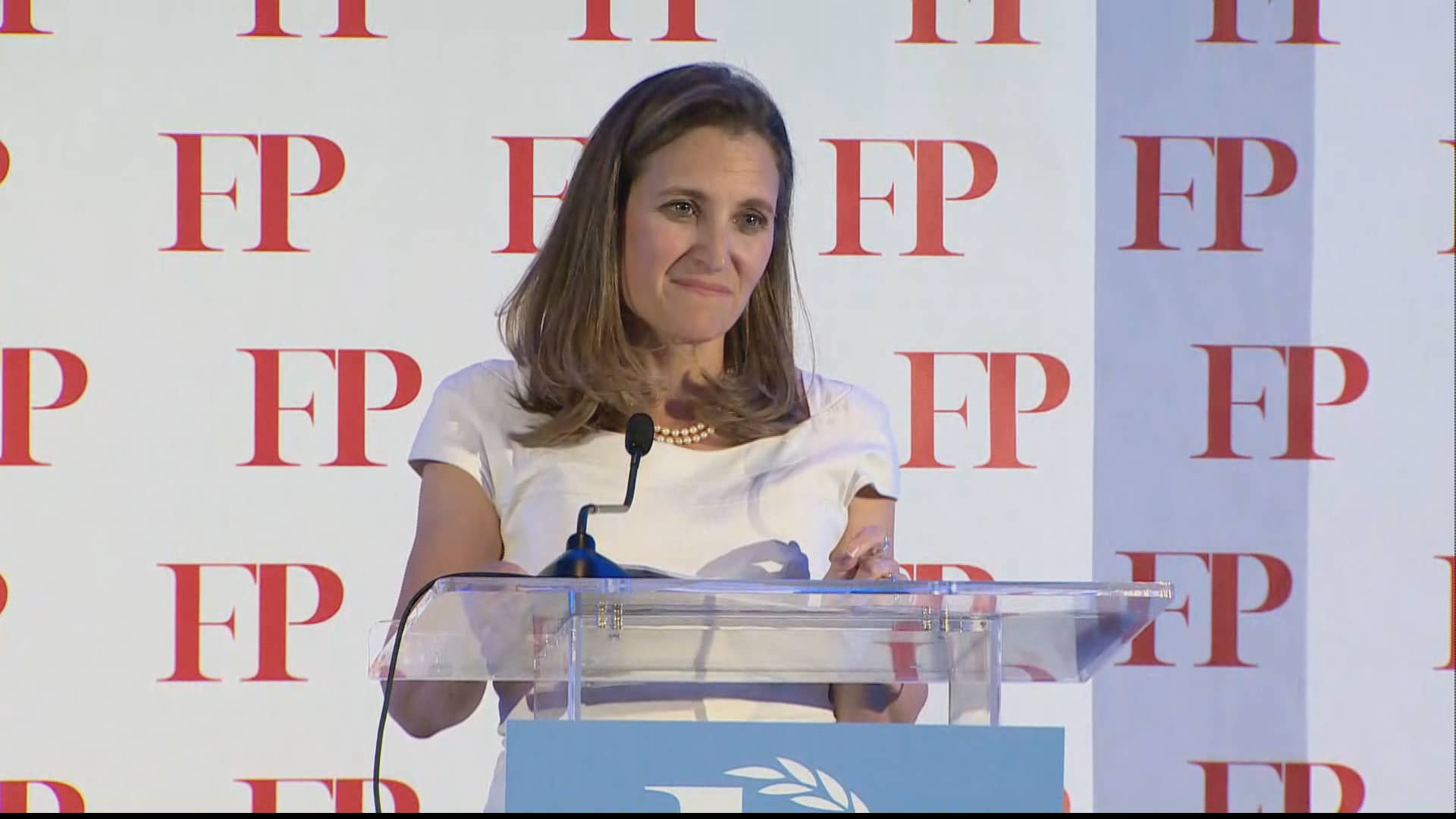 3 years agoVideo
2:36
"We will not escalate—and we will not back down": Foreign Affairs Minister Chrystia Freeland delivered a strongly worded message to Americans last night in Washington, denouncing U.S. tariffs as "hurtful" and arguing for the preservation of the world's rules-based order. 2:36

Freeland touched on similar themes in an address to the House of Commons a year ago. Now, as then, Freeland insisted that Canada stood ready to step up if the United States insisted on stepping back from its role as a leader of the liberal democratic order.

"Whatever this great country's choice will turn out to be," she said in Washington, "let me be clear that Canada knows where it stands, and we will rise to this challenge."

The scope of that challenge should not be underestimated — not least because of those tariffs.

Then the president flew to Singapore, where he praised North Korea's murderous dictator, Kim Jong Un, as a "tough" and "very smart" leader who loves his people and is loved by them in return. Upon his return home, Trump described critical media outlets in the U.S. as "Our Country's biggest enemy."

Freeland's speech wasn't specifically about any of those developments. But they all served to underline what she believes is now at stake.

Even in wealthy Western countries, she said, "we are seeing homegrown, anti-democratic movements ... including white supremacists, nativists and radical anti-globalists."

Foreign actors are working to disrupt and undermine the institutions that liberal democracies depend on — like free elections and trade. And the United States is withdrawing from the multilateral agreements, alliances and trade arrangements that have bound together the world's leading nations in the 80 years since the end of the Second World War.

It's on that last point that Freeland's main policy interests — democracy and trade — collide. If the rules-based international order is picked apart by protectionist tariffs, it's going to be much harder for nations to generate the sort of economic activity that might drown out populist resentments.

​Freeland never mentioned Trump by name, never directly criticized him for anything more than the tariffs his administration has imposed on Canadian products. But she did warn that economic insecurity empowers the "demagogue who scapegoats the outsider, the other — whether it's immigrants at home or trading partners abroad."

By merely restating Canada's case against the Trump administration's trade action —  by going to the United States and saying anything about it at all — Freeland might be risking another volley of presidential tweets, and whatever policy fallout results from them. But perhaps there's little left for a Liberal to lose when there is already a special place in hell with Justin Trudeau's name on it.

Regardless, Freeland apparently felt strongly enough about her remarks to present a copy of the text to Robert Lighthizer, the U.S. trade representative, on Thursday.

Trudeau's government argues that shared prosperity — a large and growing middle class — deprives populism of the fear and rage that fuels it. This is the core of the Liberals' prescription for these troubled times.

Punitive tariffs do not help that cause.

"No one will benefit from this beggar-thy-neighbour dispute," Freeland warned her American friends Wednesday night.

Time to step up?

Canadians will suffer too, of course. If the current conflict with the United States persists, or even escalates, the Canadian economy will suffer along with the rest of the continent. The disparities and divisions that are tearing at the fabric of liberal democracy could widen — in the United States and here at home.

And so, in theory, the new tariffs on Canadian steel and aluminum, the threatened tariffs on the auto trade and the overall uncertainty over NAFTA's fate will make it much harder to fight the forces of populism.

For the sake of liberal democracy, it might behoove Canada to step up. But it's hard to do that without the solid footing of a healthy, trade-based economy that shares its benefits broadly.

All of which underlines a significant fact: even if the United States has come adrift, its gravitational pull is still massive.

Explaining herself to reporters on Thursday, Freeland recalled a couple of lines from William Butler Yeats' The Second Coming that she made passing reference to in her speech: "The best lack all conviction, while the worst are full of passionate intensity."

"It's time to turn the tables," she said. "It is time for liberal democrats to rediscover that passionate intensity."

Still, it can't hurt to understand what you're fighting for. 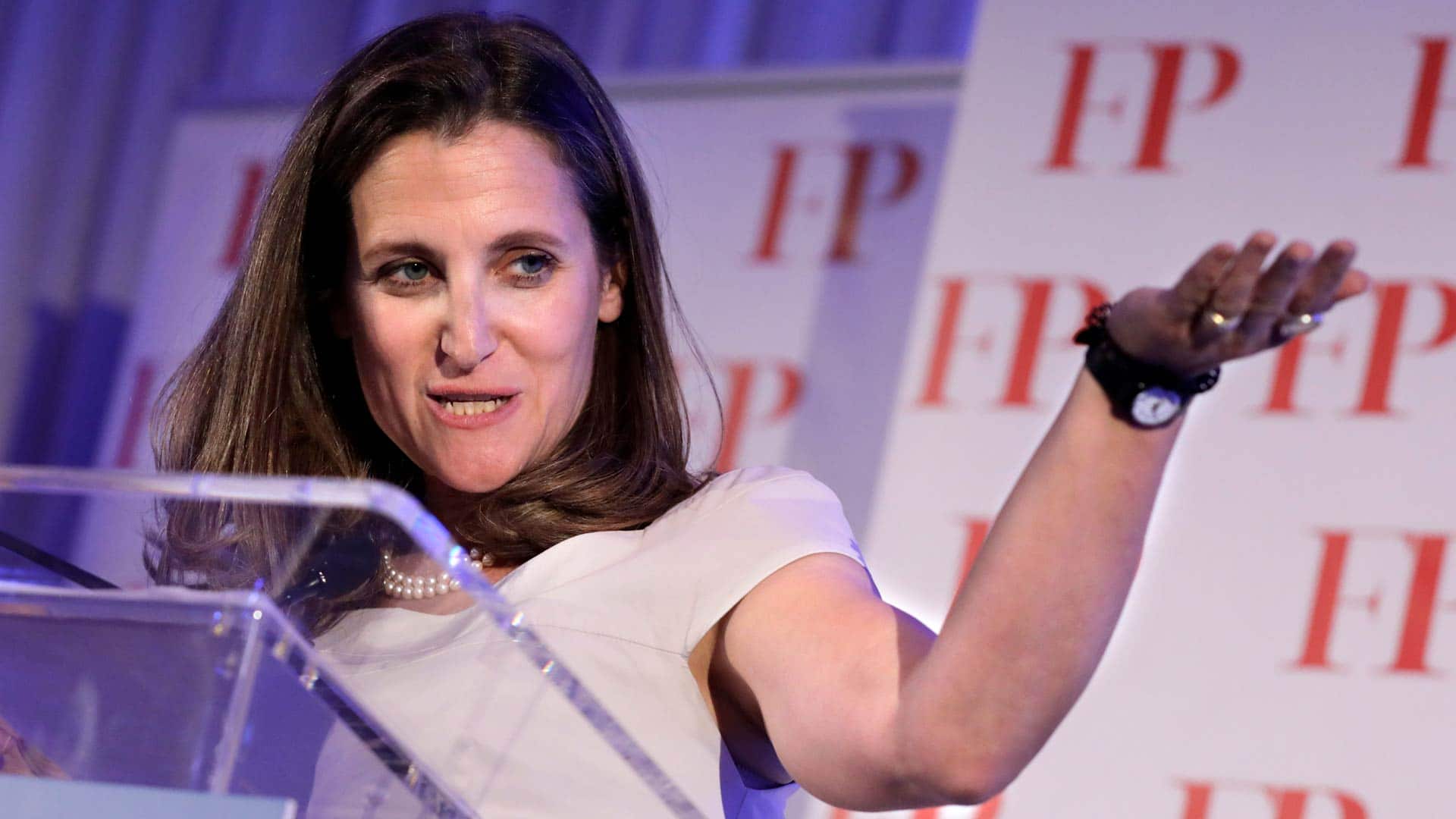