The huge forest fire in Fort McMurray last year caused air pollution levels to spike as far away as the New England states more than four thousand kilometres on the other side of the continent.

The huge wildfire in Fort McMurray last year caused air pollution to spike as far away as the New England states, more than 4,000 kilometres away, experts say.

"It was such a wide swath," said Michael Geigert, air quality meteorologist with Connecticut's Department of Energy and Environmental Protection.

Geigert says he was surprised that normally clean air from Canada was carrying such high levels of ozone. It is a clear example, say scientists, of how air pollution from wildfires can be transported long distances.

Pollution levels spiked so much that seven U.S. states applied to the country's federal Environmental Protection Agency for a special exemption for pollution levels that exceeded the National Ambient Air Quality Standards.

Geigert led the effort, making the case that airborne chemicals created by the Alberta fire created high levels of ozone on the eastern seaboard of the U.S.

"High pressure trapped pollutants from the wildfire over the upper Great Lakes for several days before normally clean northwest winds transported 'unhealthy' levels of ozone to the east and southeast across New York State and then to Connecticut," the state wrote in its case to the EPA earlier this year. 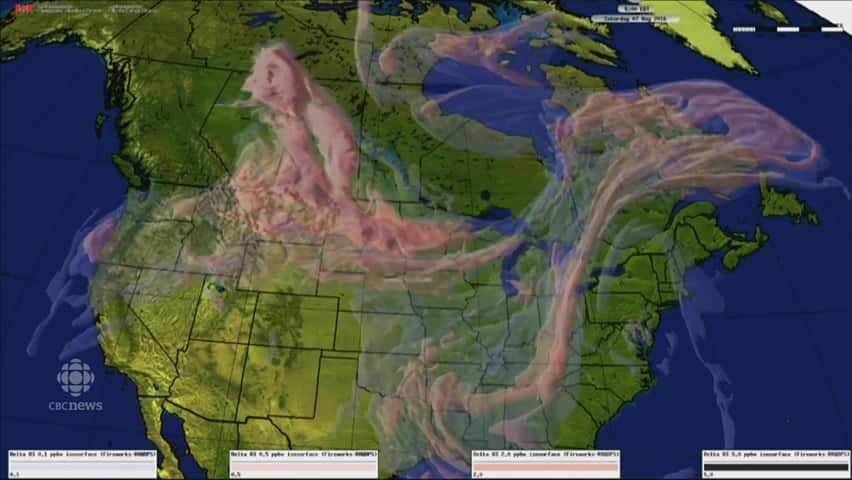 3 years ago
1:00
This digital model of the ozone from the Fort McMurray fire shows the extent to which North America was impacted by the massive blaze. 1:00

The Fort McMurray fire forced the largest evacuation in Alberta's history as it destroyed 590,000 hectares and 2,400 buildings. It was declared under control on July 5, 2016 but wasn't fully extinguished until over a year later on August 2, 2017.

Geigert said the worst conditions were between May 25 and 28, 2016, when massive plumes of smoke billowed into the Alberta air. That smoke contained a toxic cocktail of chemicals that mixed with sunlight to create ozone.

"They created their own environment, almost thunderstorms, so they were transported high into the atmosphere.This allowed the plume to be transported very far away."

Ozone becomes a dangerous air pollutant when it drops near the ground and mixes with heat. That happened in late May 2016 when the ozone drifted towards the northeastern U.S. states at the same time as summer temperatures soared. Ozone levels rose in Connecticut, Rhode Island, Pennsylvania, New Jersey, Massachusetts, Maryland and Ohio.

"It was code red — eight-hour averages over 84 parts per billion, and that is considered unhealthy for the general population," said Geigert.

"Very little is due to what Connecticut does. It's due to all sources upwind," he said. "And these forest fires, which no one has any control over, just exacerbate the situation."

The air quality on the other side of Canada was also affected, according to Paul Makar, a senior research scientist with Environment and Climate Change Canada.

"The pollutants will travel thousands of kilometres," said Makar in an interview with CBC News.

"For the Fort McMurray fires, for that matter, we've seen on satellite data ... the pollution going all the way from Alberta right through here where we are in Ontario, out over the Atlantic and on the way to Europe."

Makar says the rise of ozone levels in Canada due to the fires was less drastic than in the U.S. because the baseline air pollution here was at a lower level.

Makar points out that wildfires can have a huge impact on local air quality, as they did in B.C. this past summer when wildfires combined to create the largest blaze in the province's history.

And the increased ozone levels have made their way downwind, Makar says.

"You can certainly see the effect. What we are seeing from the summer, it is just as bad as the Fort Mac fire, or worse.

"This stuff kills people," he said.

Environment Canada has set up a team to monitor wildfires and the effects of their emissions on air quality. The agency has also set up a website where Canadians can check "smoke forecast maps" that show how the air quality in their area may be affected by wildfire smoke.

The EPA ruled in July 2017 that the Connecticut wasn't to blame for its spike in ozone.

Still, the Fort McMurray fire experience has made scientists in Connecticut a lot more wary about what might be drifting their way from Canada.

Geigert has been keeping an eye on the smoke from the B.C. fires. More than 100 wildfires are still burning there, although evacuation orders and alerts have been lifted.

"We have to realize this long-distance transport is really a factor and warn the public if we see it unfolding," he said.