Justice Minister Peter MacKay is warning MPs that prostitution will be decriminalized if his proposed legislation isn't in place by the end of the year, but says he expects a Supreme Court challenge if Parliament passes the bill into law. 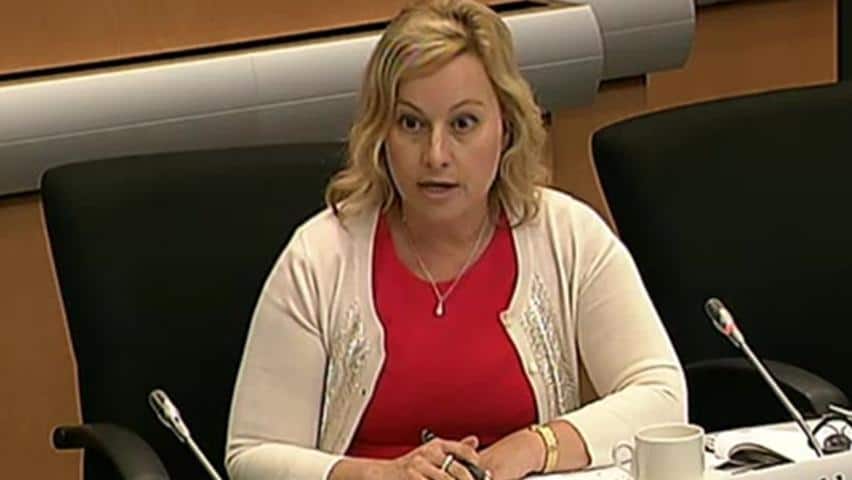 MP asks about 'eradication' of prostitution

7 years ago
5:48
MP Stella Ambler asks Natasha Falle of Sex Trafficking Survivors United and Jean McDonald of Maggie's if C-36's goal should be to end prostitution. 5:48

Current and former sex workers led the debate on proposed changes to Canada's prostitution laws Monday, making their cases for and against the legislation.

Justice Minister Peter MacKay kicked off a week of justice committee meetings by warning MPs that prostitution will be decriminalized if his proposed legislation isn't in place by the end of the year. He told reporters following the meeting that he expects a Supreme Court challenge if Parliament passes the bill into law.

Later in the day, MPs heard from current and former sex workers, as well as legal and policy experts.

Timea Nagy of Walk With Me Canada Victims' Services said she supports the government's proposed law, and that the vast majority of sex workers are forced into the industry.

Nagy described her horrifying experience as a victim of human trafficking. Her first encounter was with three men at a massage parlour.

"I closed my eyes, and I looked up and I was thinking that if anyone would have seen this, would anyone come and rescue me? Only to find out later that my so-called bodyguard was watching the whole thing on video," she said.

"I was indoors, it was safe, they paid for their services, but nobody told me the rules because I was new to it, so I was raped for about an hour by three different men."

The Supreme Court of Canada struck down Canada's old prostitution law last December in a ruling known as Bedford, and gave it a year to replace it with one that would comply with the Charter of Rights and Freedoms.

Not free expression 'by being raped'

Some advocates for sex workers said they chose their profession and want to be able to protect themselves.

"If this bill becomes law, clients will not provide information on themselves, which is essential to protect ourselves from people who are badly intentioned," said É​milie Laliberté, a spokeswoman for the Canadian Alliance for Sex Work Law Reform.

"This approach is in contradiction with the Bedford decision because it criminalizes clients as well as our professional and personal relationships and infringes upon our right to personal safety."

One argument against the legislation is that it infringes on workers' right to expression because it limits how they advertise their services.

That led to a bizarre exchange between Conservative MP Robert Goguen and Nagy.

"You were describing a scenario where you were being raped, I believe, by three Russians. Let's suppose the police authorities would have broken in and rescued you. Would your freedom of expression have been breached?" Goguen asked Nagy.

"What I'm saying is you weren't freely expressing yourself by being raped by three men," Goguen said.

Another witness explained the question to Nagy before Goguen moved on.

'Most women not trafficked'

Another witness, however, contradicted MacKay and Nagy, and said the vast majority of women in the sex trade are not trafficked.

"Most women are not trafficked. That's what the research literature says," said John Lowman, a criminology professor from Simon Fraser University​.

Lowman also took issue with Nagy's assertion that the average entry age into prostitution is 14.

"That is a preposterous claim. There is only one piece of research that supports it. It is a study of juveniles that excluded adults. If you look at research which includes both juveniles and adults, the average age is generally 18 or well above that," he said.

"This legislation will only further marginalize, further victimize and push sex workers into dangerous and potentially violent situations. This bill does nothing to protect the rights of sex workers in this country. What we will see with this legislation is the same kind of harms as under the same laws that were struck down by the Supreme Court. We will see more murdered and missing women as a result of this legislation," McDonald said following MacKay's committee appearance.

Leonardo Russomanno, who represents the Criminal Lawyers' Association, told MPs the legislation wouldn't withstand a charter challenge because the provisions are overly broad, disproportionate and arbitrary and won't achieve their goals.

Right to security at issue

Some former sex workers spoke strongly in favour of the government's approach. Natasha Falle, founder of Sex Trafficking Survivors United, said people in the industry need help getting out.

"Focusing on women and looking at them as victims in this industry will actually provide more opportunities for them to exit, which we're not seeing right now," Falle said.

"Pumping in money to organizations like Maggie's actually enables people to stay there. And they did mention that there are some women that they believe can't get out and I don't believe that that is true at all."

Prostitution itself was legal in Canada under the old law, but most related activities — including communicating in a public place for the purposes of prostitution, pimping and running a brothel — were criminal offences.

The Supreme Court said that amounted to a violation of the basic Charter right to security of the person was concerned that the provisions unduly increased the risk to sex workers.

The Conservatives' new bill creates new offences for clients and pimps, but does not criminalize prostitutes themselves.

It also cracks down on advertising and selling sexual services in public places where a child could reasonably be expected to be present.

MacKay says he's open to constructive amendments, but defends the bill as Charter of Rights compliant.

But he said he expects critics to challenge the legislation in court.

"I'm not going to predict what the courts will do, but I predict that there are those who disagree with this approach and so they may very well choose to challenge the law. It's not uncommon, put it that way," MacKay said.

MacKay told the committee that the government doesn't accept the idea that prostitution is inevitable and that prostitution victimizes the communities in which it takes place, as well as the women who sell sexual services.

"The government maintains that prostitution's inherent harms and dangers would only grow and be exacerbated in a regime that perpetrates and condones the exploitation of vulnerable individuals through legalized prostitution," he said.