Jobs and the environment were front and centre Sunday as the four declared candidates to succeed Tom Mulcair as leader of the New Democratic Party faced off in the contest's first debate in Ottawa.

Jobs, pipelines and climate change were front and centre Sunday as the four candidates vying to become the NDP's next leader crossed swords in the leadership campaign's first debate.

But while they tended to agree when it came to the need to reduce inequality and improve conditions for Canadian workers, there was a wider range of opinion when it came to pipelines and a fundamental question for the NDP — should it be content to be Parliament's left-wing conscience? Or should it steer closer to the centre of the political spectrum in the hopes of one day forming a government?

Speaking to an overflowing audience in a downtown Ottawa hotel, Peter Julian, Charlie Angus, Niki Ashton and Guy Caron all pointed to low wages and precarious job security as among the biggest problems facing Canadians.

Angus said the number of Canadians who consider themselves working class or poor has risen significantly.

"More and more people are feeling it," Angus said. "In 2009, 29 per cent of Canadians thought of themselves as working class or poor. Now it's 44 per cent."

Caron called for a basic guaranteed income, saying economic inequality is one of Canada's biggest issues.

It's time to take back our country from the rich and powerful and offer fundamental change.- Niki Ashton

"Not only is [income inequality] preventing people from contributing to our societies, to our communities because they have to worry about putting food on their table or shelter over their heads, it is preventing this economy from going forward and actually create jobs," he said.

Ashton blamed Canada's economic woes on what she described as a neoliberal agenda and bad trade deals, with the wealthy one per cent gaining, while others struggle.

"It's time to take back our country from the rich and powerful and offer fundamental change. We have to put an end to these one-way, neoliberal policies," said Ashton, citing government privatization, deregulation and trade deals.

Much of the wealth is falling into the hands of people who aren't even in Canada, she said.

Julian said Canadians are worried their pensions are being eroded, while the wealthy one per cent are shipping money to tax havens — money that he said should be returned to Canada.

"Half of the homeless sleeping outside in these vicious temperatures are people with disabilities," he said.

"Sometimes it's not possible to reconcile the environment and natural resource extraction," said Julian, who opposes Kinder Morgan's Trans Mountain pipeline and the Energy East pipeline.

Angus said the new economy will still need natural resources — whether it is steel for wind turbines or aluminum for solar panels — but it also needs hard limits on pollution.

"Finding that balance between the environment and the economy is not just a New Democrat issue — it is the question of our age."

Ashton said Canadians want a government that looks out for climate change and will recognize that good jobs can come from investing in areas such as infrastructure and green energy.

Caron pointed to Alberta NDP Premier Rachel Notley's government, which is putting a price on carbon and diversifying the economy, which has long been dependent on oil.

"There's no magical solution, but what the government in Alberta is doing should be leading the way for ourselves," he said.

While many of the questions touched on big issues like the economy, the environment or reconciliation with Indigenous Canadians, some were lighter. Candidates were asked about their favourite Quebec movie, favourite dish or favourite sport.

"Sport? Me?" responded Angus quizzically to gales of laughter from the audience. "Okay, I'm a candidate for the leadership of the party. I like hockey and I like Montreal."

To date, four candidates have joined the race to succeed Leader Tom Mulcair. Two more prospective candidates have asked the party for the forms needed to enter the race, but have not yet filed.

The debate comes as the NDP is still recovering from the 2015 election, which saw it running neck and neck with the Liberals, only to have Justin Trudeau pull ahead in the final stretch and form a majority government. Mulcair announced he planned to stay on as leader, only to lose a leadership review vote in a stunning turn of events at the party's convention in April 2016.

The leadership race is likely to bring to the fore a perennial question for the NDP. Some members believe the party should stand up for left-wing, socialist principles — regardless of whether it helps NDP MPs get elected.

Others, however, favour the decision made by Mulcair and former NDP Leader Jack Layton to move the party closer to the centre in the hope of winning an election and being in a position to bring about change.

With Trudeau's decision to approve pipelines and put electoral reform on the back burner, some observers see opportunity for the NDP to win back some of the progressive voters it lost to Trudeau's Liberals in the last election. An attractive NDP leader could result in pressure on Trudeau to shore up the more progressive wing of his party.

The deadline for candidates to enter the race is July 3. Rounds of voting for the next NDP leader will begin on Sept. 18 and continue until one candidate gets more than 50 per cent of the vote. 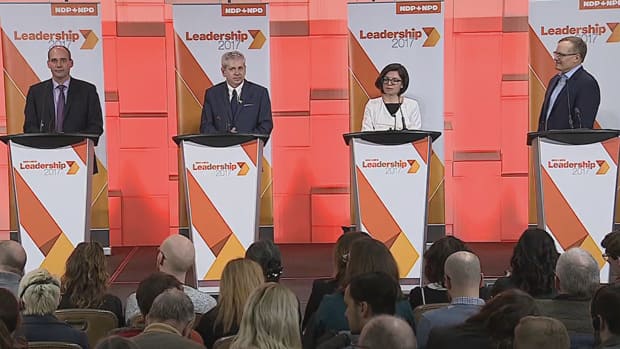