A Chinese corporation is set to invest an unprecedented $225 million in a new Canadian business. It isn't coming for oil or minerals. It wants eastern Ontario's dairy cows — and lots of goats.

But guess who likes it? The biggest market Canada is wooing right now: China.

Supply management is a big reason why a Chinese corporation is investing an unprecedented $225 million in eastern Ontario. Feihe International, Inc. wants cows. Goats, too. Lots of them.

That's because as China's one-child policy phases out, it's going to need a lot of baby formula.

"It's one of the largest economic development projects in our city's history," said Kingston, Ont., mayor Bryan Paterson, calling Canada's largest-ever foreign investment in agri-food "off the charts."

"It might be out of the ordinary, but I think that's what was most exciting."

The first concrete trucks are already pouring at the future site of a 28,000-square-metre infant formula plant. When the state-of-the-art facility opens in 2019, it will employ over 200 people in manufacturing and research jobs. Over a thousand more could come from its construction and eventual supply chains.

A small team of Chinese managers have moved to Kingston. Everyone else will be local.

Last winter, Feihe brought the mayor and a delegation from Kingston over to northeastern China for a tour of its factories and farms. Paterson was struck by how geographically similar it was to eastern Ontario.

With one big difference: scale.

A "typical rural village" they visited was three times the size of Kingston, he said.

"When you have millions and millions of babies, you need to be able to manufacture a lot of infant baby formula."

Canada hasn't made its own baby formula for years. The Canadian Dairy Commission tried for a couple of years to find a domestic processor. Demand for butter was up, and baby formula uses the non-butterfat part of milk. But no Canadian processors were interested in expanding into formula.

The CDC broadened its search internationally, to European and Asian companies.

In Feihe, the CDC found its fit: a manufacturer with over 50 years of experience and keen to expand to North America.

Promotional materials describe Feihe as the top domestic manufacturer of cow's milk formula in China in 2016, with brands in over 100,000 retail outlets across that country — mostly in medium-sized cities where urbanization is expanding and the number of middle-class consumers is rising fast.

Business proposals obtained by CBC News under the Access to Information Act anticipate strong growth for China's formula market. Only one in four Chinese mothers breastfeed exclusively for their baby's first six months. The gradual phase-out of China's one-child policy is poised to spark a baby boom.

Roughly 85 per cent of the powdered formula made in Kingston could be shipped back to China.

But that's an awfully long boat ride. Why come all the way to Canada for milk?

It's all about reputation.

In 2008, Chinese dairy products such as baby formula were discovered tainted with melamine. Hundreds of thousands became sick, and at least six children died. Since then, many Chinese distrust domestic milk and prefer foreign brands.

The world's top dairy producers have eyed China for years. But New Zealand's dominant dairy cooperative was a minority shareholder in Sanlu, the company at the heart of the melamine scandal.

Sagging global prices for milk are now forcing farms around the world out of business. Not so in Canada.

"I know that might sound silly for some people, but this is a good side of supply management," said Canadian Dairy Commission spokesperson Chantal Paul. "[The Chinese] know that they're going to have their supply." 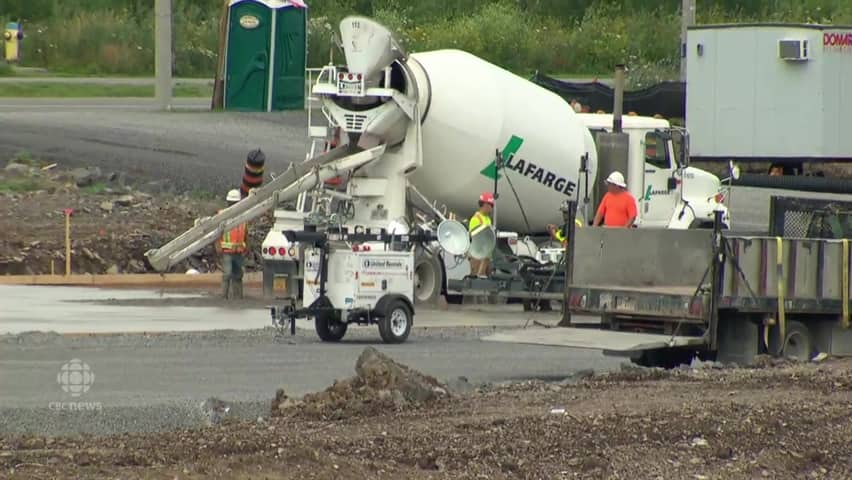 Canada enjoys a lot of goodwill right now, and Justin Trudeau has a relatively high profile in China.

"New Zealand doesn't have [Norman] Bethune," quipped Carey Bidtnes from the Kingston Economic Development Corporation, a reference to the Canadian doctor who became famous in China in the late '30s.

Feihe plans two production lines in Kingston, starting in 2019: one mixing and drying formula from cow's milk, a second with goat's milk.

Canada's marketing boards make supplying the cow's milk straightforward — demand in Eastern Canada's pool is expected to rise by about one per cent.

Supplying enough goat's milk is another story. But there's no supply management for goats. You could milk every one in Ontario and it still wouldn't fill Feihe's order.

Ontario's goat industry produces about 52 million litres annually. But that milk is already spoken for.

If Feihe wants 75 million litres, the industry must double or triple its size. In the short term, goat milk may be trucked in from Quebec or the U.S. Over time, Feihe wants to build up a local industry.

'Lots would love to expand'

It all spells opportunity for anyone frustrated by how expensive it is to get into the cattle business — milk goats instead.

The young farmer from Winchester, Ont., said Ontario's goat industry today is where the cattle business was three or four decades ago. It needs to improve breeding and nutrition to boost production.

Surveying a converted barn full of Saanen and Nubian goats — milking breeds popular in Europe — Jackson described how he's reducing kid mortality and improving the quality of his milk.

Some Chinese investment has flopped, he knows. But his research suggests Feihe isn't a fly-by-night company.

"Hey, at the end of the day, whoever buys the product," he said.

He and his partner used to joke about wanting to expand from 300 to more than 2,000 goats within five years.

"With this plant coming into effect, that'll make that joke actually be able to happen," he said.