Canada is all but certain to miss its Copenhagen Accord target to reduce greenhouse gas emissions by 2020, the country's environmental watchdog warned Tuesday. 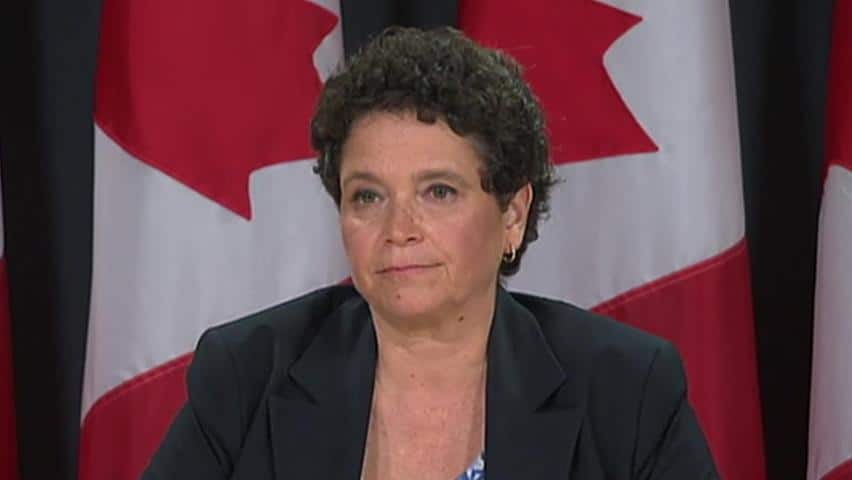 Canada behind on emissions targets

6 years ago
4:24
Environment and Sustainable Development Commissioner Julie Gelfand said in her fall report released Tuesday that there is no plan to meet federal emissions reduction targets. 4:24

Canada is all but certain to miss its Copenhagen Accord target to reduce greenhouse gas emissions by 2020, the country's environmental watchdog warned Tuesday.

And not only has the Harper government failed to introduce regulations to limit emissions from the oil and gas sector, the fastest growing emitter, it has no plan for meeting the target, Julie Gelfand said in her first report as commissioner of the environment and sustainable development.

Under the accord, which the government signed in lieu of participating in the Kyoto Protocol, greenhouse gas production was to be cut to 17 per cent below 2005 levels by 2020.

Gelfand's predecessor warned in 2012 that the government was off course and "two years later, the evidence is stronger that growth in emissions will not be reversed in time and that the target will be missed," said the report.

"I think when you make a commitment, you need to keep it," Gelfand said. "It's very difficult for us in Canada to expect other countries to meet their commitments when Canada can't meet its own."

The government has introduced regulations to govern the automotive and transportation sector, the biggest source of emissions, as well as the area of electricity production.

But Gelfand's report says that while regulations for coal-fired plants are in place, emissions have yet to be reduced because "performance standards take effect only in July 2015, and only apply to new plants or to existing plants when they reach the end of their useful life."

Using Environment Canada data, the commissioner estimated that by 2020, greenhouse gas production in the oil and gas sector will be 27 megatonnes higher than it was in 2012. That's the biggest increase of any sector.

Gelfand also found that detailed, proposed regulations are sitting on the environment minister's desk, but the "federal government has consulted on them only privately, mainly using a small working group of one province and selected industry representatives."

Federal officials told the commissioner implementation has been delayed over "concern about whether regulations would make Canadian companies in the sector less able to compete with their U.S. counterparts," the report said.

Timelines to put reduction measures in place have not been met and there has been little in the way of consultation with the provinces on how to achieve the national emissions target, Gelfand said.

Environment Minister Leona Aglukkaq told the House of Commons that greenhouse gas emissions are 130 megatonnes lower than they would have been under the Liberals, but she didn't say how she arrived at the calculation.

She went on to highlight the restrictions on automobile and electricity emissions.

"These initiatives build on our already impressive record," Aglukkaq said.

But Liberal environment critic John McKay said it's clear the government is not serious about imposing regulations on the energy sector until perhaps well after the next election.

"Canadians are being grossly misled if they think that this government has even the remotest intention of ever trying to achieve any greenhouse gas targets, let alone join the realm of civilized nations," McKay said.

The commissioner's report also tore a strip off Environment Canada, Transport Canada and Fisheries and Oceans Canada, saying mapping and icebreaking services in the Arctic are not what they should be at a time of growing marine traffic in the Far North.

For almost a decade, the government has been talking up issues of sovereignty and resource development in the Arctic, but many high-traffic, high-risk areas remain inadequately surveyed and most of the available charts may not be current or reliable, the report found.

"The Canadian Coast Guard cannot provide assurance to mariners that aids to navigation meet their needs for safe and efficient navigation in high-risk areas of the Arctic," Gelfand concluded.

The government did receive good marks for how it is monitoring development of Alberta's oilsands, but Gelfand said more should be done to consult First Nations and to incorporate traditional ecological knowledge into Environment Canada's monitoring activities.

Plans to continue monitoring the project are unclear after March 2015, she warned.

When it comes to deciding which projects are designated for environmental assessment, the rationale is unclear, the commissioner also noted.

In addition, federal departments need to do a better job of flagging individual ministers about the environmental impact of their decisions; in addition, strategic environmental assessments are often not stapled to projects put before cabinet.