Sorry, English-language election debate host hopefuls: the bidding war appears to be over, at least as far as the Conservative Party is concerned. The party has accepted the Munk Debates' offer of a foreign policy face-off, the fourth - and likely final, debate slot.

Conservatives, NDP accept offer of election debate - but Greens leader Elizabeth May among those left out

Sorry, English election debate host hopefuls: the bidding war appears to be over, at least as far as the Conservative Party is concerned.

The party has accepted the Munk Debates' offer of a debate on foreign policy — the fourth, and likely final English-language, debate slot, with the likely prospect of one more in French.

Meanwhile, the broadcast consortium — which includes CBC, Radio-Canada, CTV and Shaw/Global — announced it has reached a deal in principle to hold two nationally televised debates, one in English, one in French, "at the height of the 2015 federal election campaign."

Four of the five major federal political parties — the New Democrats, the Liberals, the Green Party and the Bloc Québécois — have signed on to the proposal, which was finalized during a closed-door meeting in Ottawa Thursday afternoon.

Notably absent from the list, however, is the Conservative Party, at least for the moment.

Kory Teneycke, the party's lead negotiator, made it clear last week he would not take part in further discussions with the broadcasters, who he has publicly urged to to cover the privately-hosted debates "in a manner that ensures all Canadians can watch." 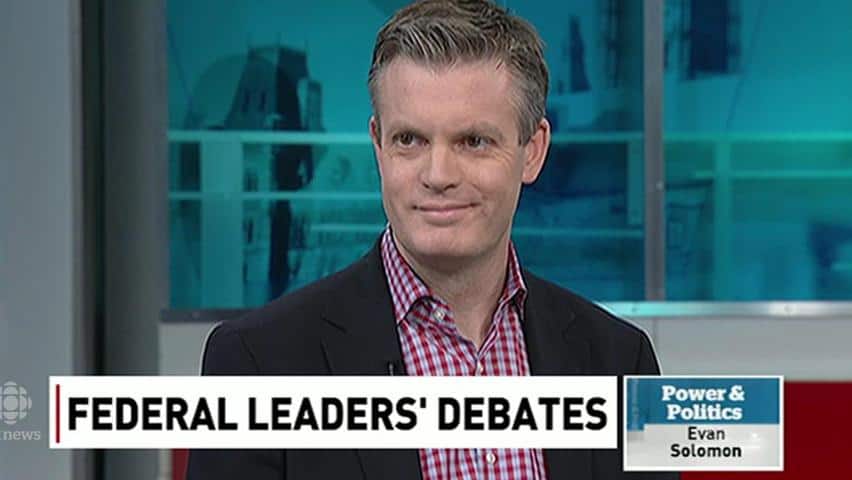 What's behind the Conservative debate strategy?

In a statement released before the consortium deal had been announced, Teneycke suggested the Munk debate would highlight the "stark differences" between Prime Minister Stephen Harper and his opponents on topics ranging from "Russian aggression in Eastern Europe" to how best to confront ISIS.

Teneycke has said the party would consider up to five debates, which leaves just one spot remaining, which will almost certainly go to to a French-language outlet.

In a release announcing their successful bid, Munk Institute chair Rudyard Griffiths said that both Harper and New Democrat Leader Tom Mulcair have accepted the invitation.

And while they are still waiting for a response from Liberal Leader Justin Trudeau, he confirmed Green Party Leader Elizabeth May has not been asked to take part, as her party does not meet the requirement of 10 MPs to be an officially recognized party in the House of Commons.

"It was our determination that inviting all the leaders of the federally registered parties recognized by Elections Canada, parties who also have MPs in Parliament, numbering six in total, to our standalone event would unduly limit our ability to hold a substantive debate," Griffiths explained. That means the Quebec federal parties Bloc Quebecois and Forces et Democratie, both of which have two MPs like the Greens, were not invited either.

Shortly before the deal with the consortium was announced, the Liberal Party, which had thus far maintained a non-committal stance by refusing to accept or reject any invitations — issued a statement laying out its "overarching principle" on the issue — namely, that debates "need to reach the largest number of Canadians," an ability they say "only the broadcast group" possesses.

"We believe that a debate hosted by the country's four, national networks is the best way to have as many Canadians as possible engage in the debate process," the statement notes.

They also want to see an "equal number" of debates in both official languages, with the French debates available "for Francophones across the country." The party said it would also like at least one debate in a "town-hall style format, where the bulk of the interactions are audience-based."

Other criteria listed in the Liberal statement:

The Liberals are also the first party to explicitly raise the issue of whether "pre-writ debates" — which would include at least one, and possibly more, of the debate proposals accepted by the Conservatives — would include a blackout on party advertising from the date of debate to the "official start of the election."

According to the Liberals, such a rule would ensure fairness in the face of the Conservatives' overwhelming financial advantage.

NDP spokesman George Soule says his party believes more debates are both helpful to Canadians and "good for democracy."

To that end, his leader has accepted "in principle" every invitation extended thus far — and is also open to the proposal put forward by the broadcasters last week.

"You can be sure that [Mulcair] will debate the prime minister anytime, anywhere," he said.

Soule noted the NDP has already stated "Francophones across the country must have access to the leaders' debates."

Meanwhile, Green Party spokesman Julian Morelli says he agrees with the Liberals that reaching the largest number of Canadians is "key" — and sees Teneycke's recent exhortations to the broadcasters to carry debates hosted by other media outlets as a tacit admission.

"He's admitting that the way he's proposing it is flawed, that it won't reach Canadians," he told CBC News. "Now he's asking the consortium to come to make sure it does."

Morelli also likes the idea of a town hall format.

May has been invited to take part in the Rogers/Maclean's event.