The Federal Court has ordered the Chief Electoral Officer to review his decision to not recommend a change in the scheduled federal election date — October 21 — which coincides with a Jewish holiday.

The Federal Court has ordered the chief electoral officer to review his decision to not recommend a change in the scheduled federal election date — October 21 — which coincides with a Jewish holiday.

Orthodox Jewish candidate Chani Aryeh-Bain, who is running for the Conservatives in the Toronto-area riding of Eglinton-Lawrence, and Ira Walfish, an Orthodox Jewish political activist, said Elections Canada's Stéphane Perrault did not properly consider their rights under the Charter of Rights and Freedoms.

"... This judicial review is granted as the overall decision of the CEO does not demonstrate the hallmarks of transparency, intelligibility and justification, as it is not possible to determine if he undertook the necessary proportionate balancing between the applicant's charter rights and the exercise of his statutory duty," says the Federal Court ruling.

The current election date coincides with the Jewish holiday of Shemini Atzeret, which begins Oct. 20 and ends Oct. 22. Aryeh-Bain argued that during the holiday, observant Orthodox Jews must refrain from a number of activities — including voting and campaigning — and cannot ask others to work for them.

"Elections Canada will act in a timely manner in accordance with the directions provided by the Court. I will make public my final decision as soon as possible," Perrault said in a statement Tuesday after the judge's decision was released.

"Elections Canada remains committed to fostering meaningful opportunities for all Canadians to participate in the federal election."

Conservative Leader Andrew Scheer said it's important to remember that, aside from advance poling days, during the writ period it's possible to vote any day of the week at an Elections Canada office in a given riding.

"We have a court decision that we all have to respect now and it's up to Elections Canada to review the court decision and to make a final decision," he said. 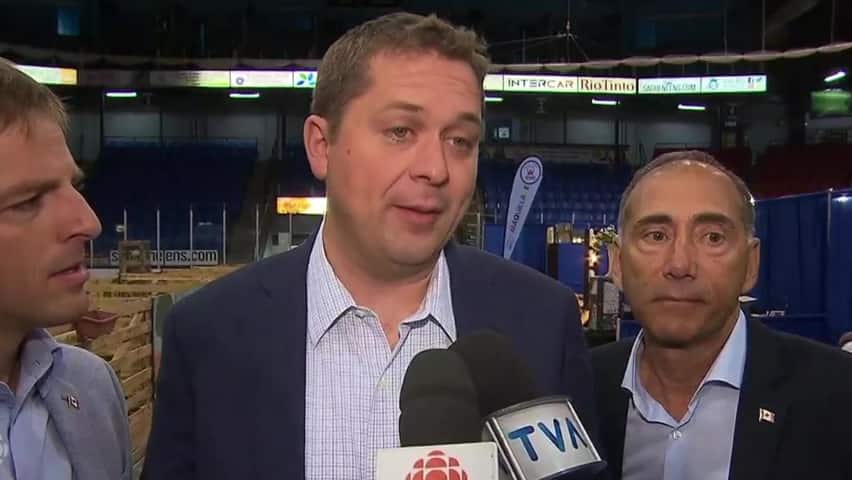 Scheer on whether the date of the election should change

1 year agoVideo
0:37
Conservative Leader Andrew Scheer says it's up to Elections Canada to decide whether to change the federal election date, but that there are many ways for Canadians to vote during the entire campaign. 0:37

Aryeh-Bain said that, aside from preventing her from participating on voting day itself, the current federal election date will negatively affect her campaign. Eglinton-Lawrence has about 5,000 Orthodox Jewish voters and in the last three federal elections it was decided by 2,000 to 4,000 votes.

Perrault wrote to Aryeh-Bain in May saying that he was made aware of the issue through the Centre for Israel and Jewish Affairs as early as August 2018 and assured it that steps were being taken to ensure voter accessibility.

The CEO's efforts were focused on advance polling and special ballot options. No consideration appears to have been given to recommending a date change.Federal Court judgment

"I believe that Elections Canada is in a position to ensure that all voter services and candidate services can be carried out in advance of the Jewish High Holy Days. As such, I could not argue that we will not be able to deliver on our mandate," Perrault wrote in a letter to the CIJA.

B'nai Brith Canada, a Jewish advocacy group which was an intervener in the case, argued that holding a federal election on a religious holiday infringes on the democratic rights of Canadians and undermines the democratic process.

The judgment supported those claims and criticized Perrault's decision, saying he did not adequately consider how the election date affected a date of religious significance and how that might infringe upon voters' and candidates' rights under the Charter of Rights.

"The record does not indicate how or if the CEO 'balanced' these considerations against the Charter values of Orthodox Jewish voters and candidates to ensure their rights to 'meaningful participation' are respected," the judgment reads.

"The CEO's efforts were focused on advance polling and special ballot options. No consideration appears to have been given to recommending a date change."

The judgment says Perrault must reconsider his decision in a way that "reflects a proportionate balancing of the Charter rights with the statutory mandate."

According to the Canada Elections Act, Perrault has until Aug. 1 to make a date change recommendation to cabinet in order to leave enough time for the election date to be moved.

Shimon Koffler Fogel, president of the CIJA, said he respects Perrault's decision but would keep working to ensure "every Jewish voter can cast their ballot."

"We respect the democratic and judicial process that has led to today's ruling. Changing the date at this stage entails considerable logistical and financial implications," Fogel said.

"We will respect the chief electoral officer's decision and will continue working closely with Elections Canada to support its efforts to maximize voter participation and inclusion of the Jewish community – which is a cornerstone of democracy."