A standoff between far-right groups and anti-fascist protesters along the Canadian side of the U.S. border forced police to temporarily shut down the crossing near St-Bernard-de-Lacolle, Que., on Saturday.

A standoff between far-right groups and anti-fascist protesters along the Canadian side of the U.S. border forced police to temporarily shut down the crossing near St-Bernard-de-Lacolle, Que., on Saturday.

A separate anti-illegal immigrant rally on Parliament Hill, held amid heightened concerns about the arrival of asylum seekers, also provoked a handful of skirmishes, as riot police stepped in to prevent physical violence.

Roughly 300 members of the Storm Alliance — a group that identifies as "ultranationalist," and claims to eschew ties to far-right white nationalists — arrived at the border crossing near Lacolle, where thousands of migrants have crossed into the country on foot without proper documentation.

La Meute, French for "The Wolf Pack," another anti-immigrant, anti-Islam group, was also on hand at the border town Saturday.

Buses carrying roughly 100 anti-facist — or antifa — counter-protesters, from the group Solidarity Across Borders, left Montreal early Saturday to confront those associated with Storm Alliance and La Meute at the border. By midday, the far-right elements outnumbered those on the other side who said they stood in support of refugees.

Members of the provincial police, Sûreté du Québec, formed a perimeter to keep the two forces roughly 40 metres apart, while both sides taunted one another with chanting.

The police, decked out in tactical gear, with gas masks and heavy weaponry, blocked members of the Storm Alliance from marching closer to makeshift tents built by the federal government to temporarily house refugees, many of whom hail from Haiti.

Storm Alliance dispersed from the scene shortly before 3 p.m. ET after it became clear they would not make it to their intended destination. 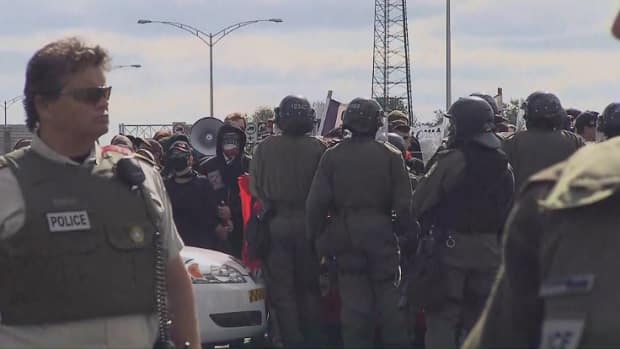 Amid the tension, the Canada Border Services Agency (CBSA) closed the Lacolle crossing to passenger traffic for about four hours. It is now reopened. Traffic was being rerouted to other nearby points of entry.

Shariah a concern for anti-immigration protesters

On Parliament Hill, protesters aligned with a group called the Canadian Coalition of Concerned Citizens (CCCC) assembled to stand against policies of the federal Liberal government they claim have allowed illegal immigration to flourish. Amid cries of "Fascist scum go away," a lone member of the group was involved in a skirmish with members of the antifa movement, before being led away by parliamentary police.

RCMP officers dressed in riot gear streamed on to the Hill after another brief scuffle between the two groups broke out. Police formed a protective line down the middle to prevent further physical encounters. The standoff ended after police escorted the group of anti-migrant protesters away from the seat of Parliament, as the number of antifa activists dwindled over the course of the afternoon.

Georges Hallak, the founder of the CCCC and himself an immigrant from Lebanon, was at the Ottawa protest. He told CBC News he is concerned Muslims will impose Shariah — the Islamic religious guidelines that govern everything from personal hygiene and charity to pilgrimages and burials — on Canada.

Hallak, a self-described Christian patriot, said he is steadfastly opposed to M-103, a non-binding, Liberal-sponsored motion that passed the House of Commons in the spring, which condemned Islamophobia. Hallak fears its passage will limit free speech and criticism of Islam.

He also said Prime Minister Justin Trudeau has failed to secure the Canada-U.S. border while allowing mayors to declare cities sanctuaries, which he said shield undocumented migrants from law enforcement.

"I respect immigration 100 per cent, as long as the people coming to this country do not have criminal records, do not pose a threat to normal Canadians, that they come here with the intent to follow the laws of Canada without trying to modify [it] for their needs — we're talking about Shariah law, which goes against the Constitution of Canada," he said.

The group was vastly outnumbered by a group of counter-protesters aligned with the antifa movement, people who claim to support migrants and oppose racism. Many of them held placards with slogans such as "No to hate speech," and "Unite to fight right," others had their faces partially covered with bandanas.

An organizer with Ottawa Against Fascism, who would only identify himself as Robin for fear of online reprisal from the far-right, said these groups are "sugarcoating" the anti-immigrant movement by insisting their actions are not racially motivated.

"These groups are scary, they mask their anti-immigrant [sentiments] but underneath all of that they support genocide ... These forms of scapegoating can escalate and become something that is genuinely dangerous."

According to federal officials, some 13,000 asylum seekers have entered Canada irregularly, with many of those people crossing over from New York State into Quebec at a single point of entry at the end of Roxham Rd. in Hemmingford, Que., not far from Lacolle.

Storm Alliance was created by people formerly aligned with the Soldiers of Odin, a group founded in Finland by a known neo-Nazi, which is highly critical of Islam and the tenets of Shariah. Dave Tregget, the founder and leader of Storm Alliance, has said he left Soldiers of Odin because of its overt racism.

Unlike Storm Alliance, many members of La Meute are Quebec sovereigntists, but they too are fearful Muslims will demand the imposition of Shariah in Canada. Some of its supporters were seen flying the Patriotes flag, an ode to the Lower Canada rebellions of 1837-38 when French-speaking settlers from present-day Quebec fought against British colonial rule.

In August, a protest in Quebec City turned violent after antifa protesters attacked a man with alleged ties to La Meute. He was seen carrying the patriote flag, alongside the provincial fleurs-de-lys.