Finance Minister Bill Morneau isn't the only cabinet minister who used a conflict-of-interest technicality to maintain control of assets while in power, the ethics watchdog confirms.

At least three other members of Prime Minister Justin Trudeau's cabinet have personal financial arrangements similar to the setup that has landed Finance Minister Bill Morneau in hot water, despite the blessing of the federal ethics commissioner.

Sohi says he has a screen in place to prevent him from participating in decisions that could benefit his wife's holdings in a company that is also a partial owner of farmland in Alberta.

He says the screen is an effective tool that has already seen him removed from the approval process for an infrastructure project, proposed by the province, that would be in close proximity to the farmland.

In response to accusations that he's personally profited from decisions he's taken as finance minister, Morneau has promised to sell off $21 million worth of shares in his family's company and place the rest of his assets in a blind trust.

Morneau, who says he was never in a conflict of interest amid questions about his work to spearhead pension-reform legislation, known as Bill C-27, has promised to donate to charity any gains in the value of his Morneau Shepell shares since he was elected two years ago.

Conflict of Interest and Ethics Commisioner Mary Dawson is considering whether to launch a formal investigation into Morneau's role with the bill.

After weeks of public floggings, the Liberal government tried to fight back during question period in the House of Commons on Monday, pointing to former finance minister Joe Oliver who was sole owner of a private corporation which owns investment accounts. 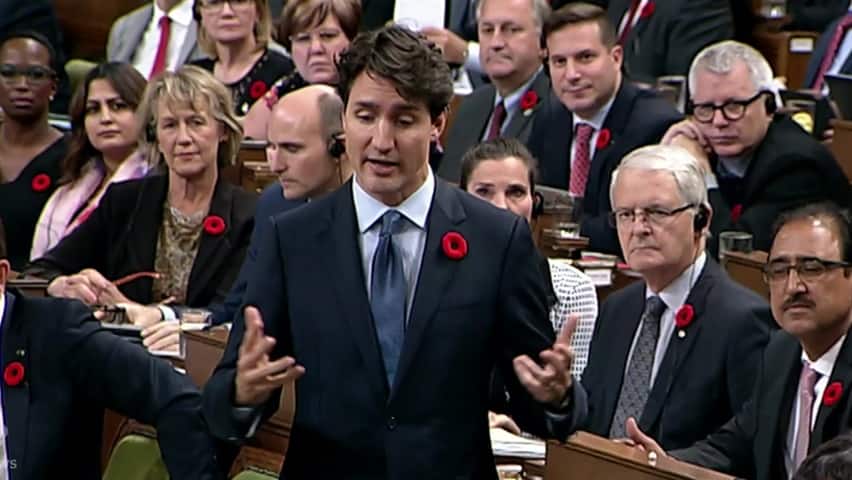 3 years ago
2:08
PM Justin Trudeau tells the opposition that former Finance Minister Joe Oliver used the same methods with his assets, as prescribed by the Ethics Commissioner, as Bill Morneau. 2:08

According to an Ottawa Citizen story at the time, Oliver and his wife argued that since the assets were in pooled funds, they had no control over them.

"I assure you neither Minister Oliver or his wife own any public securities directly nor do they trade in public securities. Their securities investments are all in pooled funds (which are like mutual funds)," the Ottawa Citizen reported Melissa Lantsman saying at the time.

"Neither he or his wife have any discretion on what is bought and sold. Everything has been vetted by the Conflict of Interest Commissioner."

Joël Lightbound, parliamentary secretary to the minister of finance, told the House of Commons Monday that the Conservatives were being duplicitous.

"What I see is a bit of hypocrisy and a lot of amnesia," he said.

1/3 After my apt. to cabinet I sold all my publicly traded shares. All my investments were in open ended funds as permitted by Conflict Act.

2/3 All decisions for fund portfolios were made by 3rd party fund mgrs. My only other assets were my home, personal effects &amp; bank accts.

3/3 I fully disclosed all my assets after taking office in accordance with the Conflict of Interest Act rules.

Former Conservative cabinet minister Lisa Raitt, now deputy leader, had a conflict of interest screen around the Hamilton Port Authority as far back as 2013, when she was the transport minister: her partner Bruce Wood was the president and chief executive.

She told CBC the conflict of interest screen was administered by her deputy minister.

Responding to media reports on Monday, the office of the conflict of interest and ethics commissioner would only say "fewer than five [Liberal] cabinet ministers currently hold controlled assets indirectly."

When asked how many members of the previous Conservative cabinet held similar assets, Dawson's office would only say "fewer than five cabinet ministers held controlled assets indirectly during the previous administration."