'We are just delighted to have a partner who understands and acts on the science,' John Kerry says

"I have to say, the current government has certainly picked up the pace in terms of collaborating, particularly in climate-related activities," Ernest Moniz said in an interview with host Chris Hall on CBC Radio's The House. "We have a lot of enthusiasm to go forward."

The cabinet-level secretary says Canada has been eager to partake in new climate projects such as Mission Innovation, an international agreement that commits the 20 signatory countries to doubling the amount of money spent on green technology research and development.

"I must say, with Mission Innovation ... this new government joined on within weeks after its coming into office, and that was because it fit their campaign statements in terms of the focus, the Canadian focus on innovation," Moniz said.

"I think it's going be a terrific opportunity to collaborate even more strongly," Moniz from his office overlooking the National Mall in Washington, D.C.

The House10:34Interview - Ernest Moniz
The U.S. Energy Secretary talks about working with Canada to fight climate change, and whether new pipelines are needed. 10:34

"It is clear that the prime minister really has begun to make his mark on Canada's future," Kerry said Thursday. "In the first few months he's been in office, he's demonstrated remarkable leadership ... on climate change.

"Climate change poses a grave threat to our entire continent, our entire planet and our collective future, and we are just delighted to have a partner who understands and acts on the science."

Trudeau and Obama agreed this week — during their official visit in Washington — to lower methane gas emissions from the oil and gas sector by some 40 per cent from 2012 levels by 2025, but the announcement faced criticism from some who say it's hardly an ambitious move. 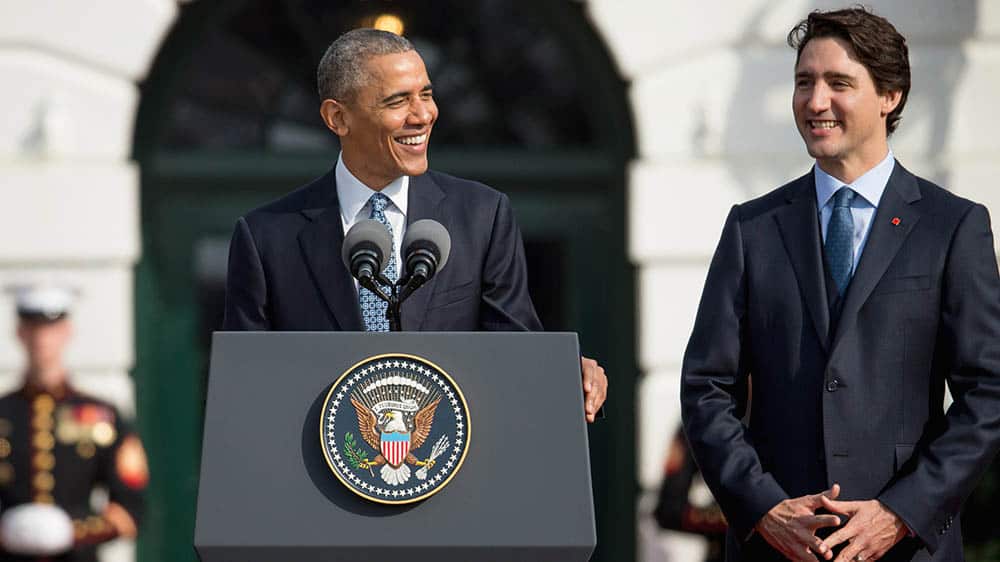 Obama: 'We have a common outlook on the world'

"The announcement on methane took some of us by surprise ... it was not quite what we expected to hear on climate change, but it's something," Laura Dawson, director of the Canada Institute at the Woodrow Wilson Institute, said in an interview with The House.

The Canada-U.S. agreement was expected to include tighter fuel and auto-emission standards, but none were included in the final document.

Moniz conceded that the methane gas announcement alone will not be nearly enough to reach goals the two countries set at the Paris climate talks late last year.

"Those ambitions, in and of themselves, will not take us to 2 degrees [of global warming] or below. So therefore, we are going to need increasing ambition with time," he said. "A major part of that is innovation — that's where Canada and the United States are coming together."

The Liberal government, in its negotiations with the provinces, recently raised the possibility of a national price on carbon as a concrete way to lower greenhouse gas emissions and curb consumption of fossil fuels.

Moniz endorsed carbon pricing as a way for the U.S. to meet its ambitious GHG reduction targets set by Obama in 2014. The president pledged to cut emissions by 28 per cent below 2005 levels by 2025.

"I think we have to go there [with an economy-wide price on carbon], I think the president thinks we have to go there, but he also said if Congress is not prepared to do that, we can't wait. Nature's clock keeps ticking whether our Congress acts or not," Moniz said.