Conservative Leader Erin O'Toole today downplayed talk of the Tories triggering a fall election, saying he's more focused on holding the Liberal government to account over its efforts to rebuild an economy ravaged by the COVID-19 pandemic.

Conservative Leader Erin O'Toole today downplayed talk of the Tories triggering a fall election, saying he's more focused on holding the Liberal government to account over its efforts to rebuild an economy ravaged by the COVID-19 pandemic.

O'Toole said his party is ready for an election and it has enough money on hand to run a full campaign if one is called after the Sept. 23 speech from the throne.

He said the Conservatives already have organizers in place across the country in case the Trudeau government falls on a non-confidence motion this month — which would trigger an election before Christmas — but insisted an early election is not his focus a week into the job as Conservative leader.

"If they want to rattle sabres, they will find that our sabre is sharp," O'Toole said of the Liberals. "But I'm not here for an election. I'm here for the re-launch of our economy post-COVID."

Watch: Conservative Leader Erin O'Toole on the prospects for a fall election

'If [Liberals] want to rattle sabres, they will find out our sabre is sharp' — O'Toole

5 months agoVideo
0:39
Opposition Leader Erin O'Toole told reporters today that his team is united and ready for an election. 0:39

The Conservative leader said he would not do away with current relief payment programs like the Canadian Emergency Response Benefit (CERB) — but he does want to see more of a focus on transitioning Canadians back to normal employment.

"I think the relaunch will be more difficult because of slow action by the Trudeau government and so I want to make sure we fight for the opportunity for Canadians in any part of this country to work to provide for their families," he said.

Speaking to CBC Radio in Vancouver today, Prime Minister Justin Trudeau defended the government's decision to prorogue Parliament and shut down the parliamentary committees studying the WE Charity affair, saying it's a chance for the opposition parties to either vote on ambitious Liberal plans to rebuild the economy or force an election.

"The speech from the throne ... will allow opposition parties to weigh in on whether or not they agree with the new direction we're taking for building back Canada. That is a fundamentally important thing in our democracy," he said.

The Conservatives alone could not bring down the government, given the current party standings in the Commons. O'Toole would have to join forces with both the Bloc Québécois and the NDP to launch an election by voting against the speech.

O'Toole also made it known today that he will be pushing the Liberal government to take a harder line on China.

He said he favours slapping sanctions on senior Chinese Communist Party officials through provisions of the Sergei Magnitsky Act.

The law allows the federal government to impose financial and other restrictions on foreign nationals responsible for, or complicit in, violating internationally recognized human rights.

Citing China's detention of Uighur Muslims, its crackdown on democratic rights in Hong Kong, its decades-long repression of Tibet and its imprisonment of Canadians Michael Spavor and Michael Kovrig, O'Toole said sanctions would signal the Canadian government is taking a much more "serious approach" to Beijing's abuses.

"Canadians deserve to know the difference between Mr. Trudeau and myself. He was famous for saying the country he most admired was China. The country I most admire is Canada, the one I've served my whole life. We have to take a stronger, more principled approach to China," he said.

Changes at the top

O'Toole today also named the MPs who will sit on the Tory front bench as part of his House of Commons leadership team — parliamentarians who still stare down the Liberal government in question period and challenge ministers on their files.

O'Toole said he hopes his choices will encourage more Canadians to "see themselves reflected in our conservative movement."

Of the eight people picked Wednesday, two are women, one is a visible minority and another is a gay man.

His primary opponent in the contentious leadership race, Peter MacKay, had picked up the most caucus endorsements. Some of those who sided with O'Toole have now been rewarded with leadership positions.

O'Toole put his own stamp on the party today, moving out some of the MPs that held top jobs under former leader Andrew Scheer.

Scheer himself has not been named to the House leadership team but could be picked as a critic — or as the party calls it, a "shadow minister" — when O'Toole releases those names at a later date. 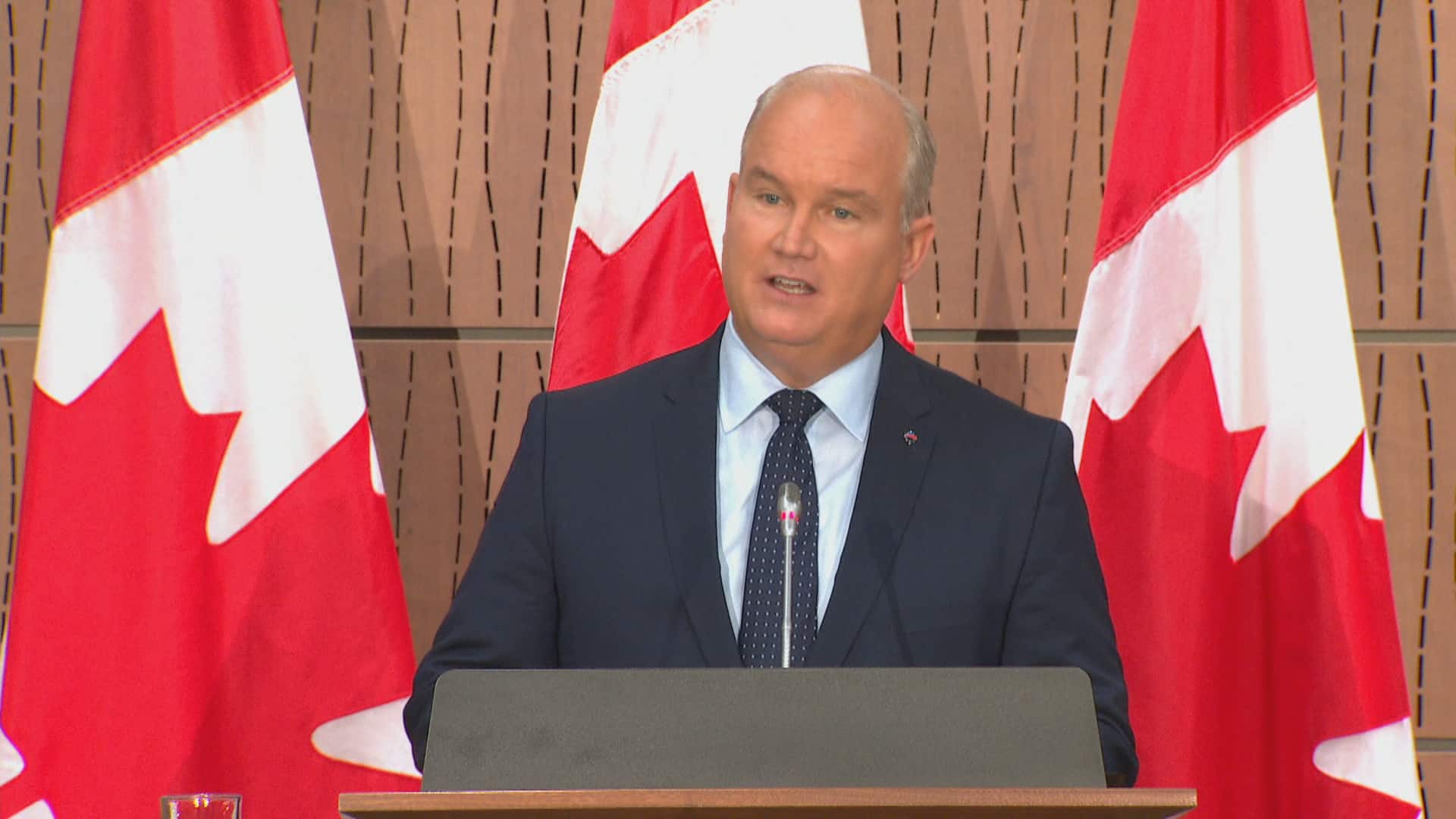 5 months agoVideo
25:47
Here is the full recording of Erin O'Toole speaking with reporters today after naming the key MPs who will run the Official Opposition in the House of Commons. 25:47

The most notable demotion was for Leona Alleslev, a former Liberal MP who defected to the Tories in September 2018. Alleslev served as deputy leader under Scheer but has now been swapped out.

Instead, Manitoba MP Candice Bergen will take on the role as deputy leader, a position also held previously by former Ontario MP Lisa Raitt before her 2019 election defeat.

Bergen was first elected in 2008 and was a junior cabinet minister in Stephen Harper's government.

Until today, Bergen had served as the party's House leader — a key position in a minority Parliament, given the constant negotiations between government and the opposition parties over legislation and votes. Bergen demanded changes to a number of COVID-19-related programs over the last six months before the Tories agreed to pass the bills into law.

Bergen, one of only three westerners on O'Toole's House leadership team, said she would focus her efforts on addressing political alienation in the West at a time when the natural resources sector in this country — notably the oil and gas industry — is facing massive job losses and price declines.

Richard Martel, a former hockey coach who won his Quebec seat Chicoutimi—Le Fjord in a 2018 byelection, will be O'Toole's new Quebec lieutenant.

Martel replaces MP Alain Reyes, a Scheer loyalist. O'Toole said he will redeploy Reyes to another role in his shadow cabinet.

A party whip acts as an enforcer-in-chief, ensuring there are enough party members in the chamber for debates and votes. The whip also decides on other key questions — such as which committees a member will sit on — and assigns office space and seats in the chamber.

Another Albertan, MP Tom Kmiec, will continue in his role as the national caucus chair.

Watch: O'Toole is asked if he would keep Gov. Gen. Julie Payette 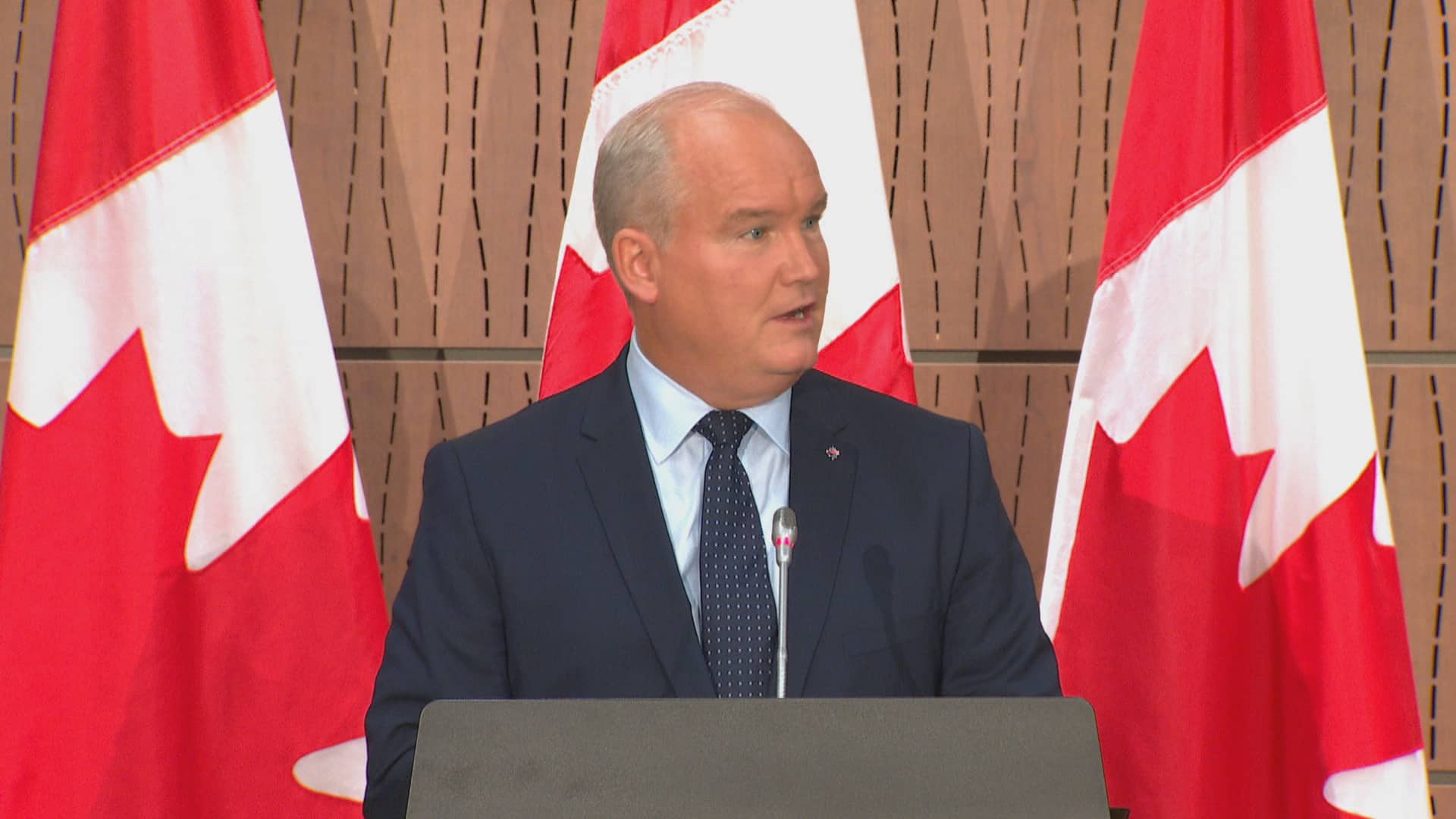 O'Toole asked if he would keep Gov. Gen. Julie Payette

5 months agoVideo
0:25
Opposition Leader Erin O'Toole says it would be 'inappropriate' for him to comment on the future of the Governor General. O'Toole spoke with reporters in Ottawa Wednesday. 0:25