It was just as well that Andrew Scheer and Justin Trudeau wound up next to each other in last night’s leaders’ debate because it became clear, right from the opening exchange, that each one intended to undermine the other.

Things get personal as Liberal, Conservative leaders strain to put distance between them in English debate

It wasn't deliberate. But it was just as well that Andrew Scheer and Justin Trudeau wound up next to each other in Monday night's leaders' debate, because it became clear, right from the opening exchange, that each intended to undermine the other.

Within the first few minutes the Conservative Scheer called his Liberal opponent a fraud and phony unworthy of being prime minister.

"Justin Trudeau only pretends to stand up for Canada," Scheer said. "You know he's very good at pretending things, he can't even remember how many times he put blackface on because the fact of the matter is he's always wearing a mask."

Not to be outdone, Trudeau used an exchange with People's Party of Canada Leader Maxime Bernier over immigration and identity to offer his own, intensely personal assessment of Scheer.

"Mr. Bernier, your role on this stage tonight seems to be to say publicly what Mr. Scheer thinks privately," he said. 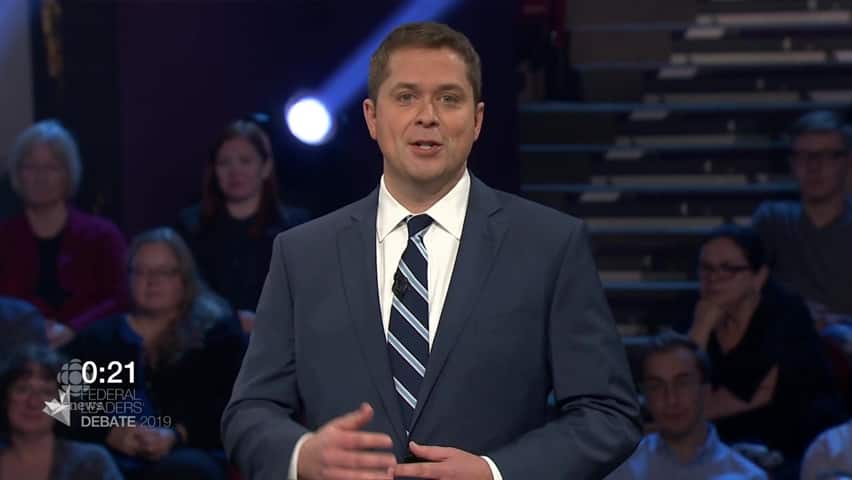 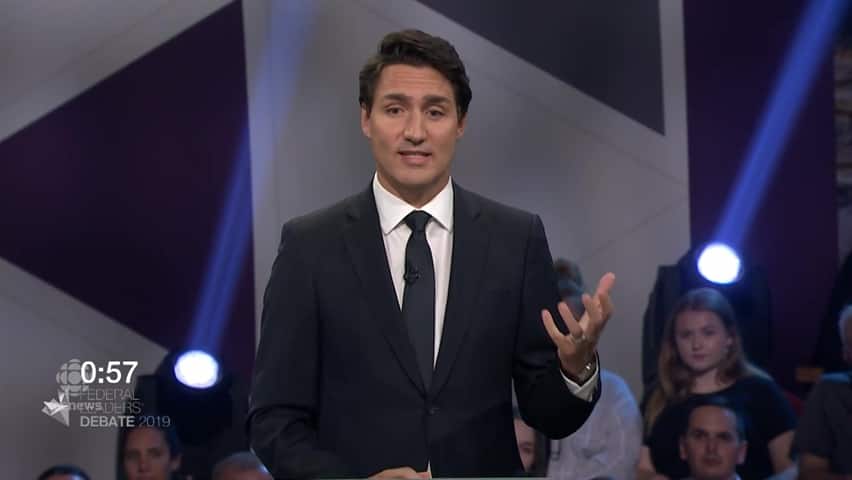 1 year agoVideo
1:07
'Your role on this stage seems to be to say publicly what Mr. Scheer thinks privately,' Liberal Leader Justin Trudeau says to People's Party Leader Maxime Bernier during the English-language debate in Gatineau, Que. 1:07

Politics is, of course, a blood sport. It can be very effective when trolling for votes to troll your opponent.

In 2011, Jack Layton attacked Michael Ignatieff for having the worst attendance record in the Commons: "You know most Canadians, if they don't show up for work, they don't get a promotion."

The difference this time is the Trudeau-Scheer exchanges resorted more to name calling than point making, the goal more about diminishing the other's reputation than building your own brand.

The question is why. Conservative strategist Shakir Chambers, speaking on CBC Radio's post-debate coverage, said parties know that audiences rarely stay for the whole debate, so Scheer "needed to get his point in early."

But the real motivation for both Scheer's and Trudeau's bombast may have more to do with their inability to put any distance between them.

Shaking up a static campaign

"When Andrew Scheer went low early he set the tone for the debate," she said.

Trudeau reminded the audience that Scheer won't defend a woman's right to an abortion, or same-sex marriage. Scheer said he, and millions of other Canadians, have a right to their views — a right Trudeau won't recognize, and views he tries to demonize.

For the other leaders on the stage, the barbs offered an opportunity and NDP Leader Jagmeet Singh took advantage.

"What we have here is Mr. Trudeau and Mr. Scheer arguing about who's worse for Canada," he said to laughter from the debate audience at the Museum of History in Gatineau, Que., directly across the Ottawa River from Parliament Hill. "We've got to start presenting who's best for Canada."

Who's best is only part of the calculation voters will have to make in the days ahead. What's best is the other. And at least there some agreement emerged.

How far, how fast?

Singh, Green Leader Elizabeth May and Trudeau all agree that climate change is a pressing issue. The difference is the NDP and Greens say they would move more quickly than Trudeau's Liberals to cut emissions more deeply.

Those same three are committed to including prescription drug coverage as part of medicare. The difference is that the NDP and Greens are promising to bring in a universal pharmacare. The Liberals aren't going that far.

For those three leaders, the only debate in English represented the best, and possibly only, chance to appeal to progressive voters who list climate change, health care and income inequality as potential ballot box issues.

Scheer's campaign follows a different path. His focus is on lowering taxes, building an east-west energy corridor and balancing the budget within five years.

But Scheer is not alone on the other end of the political spectrum. Bernier used his late addition to the debate to present his former leadership rival as a poser.

"You are calling yourself a Conservative. You don't want to balance the budget in two years, You will add $70 billion to our debt," Bernier said when given an opportunity to direct a question to another leader. "Andrew, are you a real Conservative? No. I think you are a Liberal."

On this night, so filled with personal insults, being called a Liberal surely was the mildest slight of all.