TransCanada is closing the book on its proposed Energy East pipeline, but the political fallout is just beginning, with Conservatives hammering the Liberals over their "disastrous" energy policies and Saskatchewan's premier going so far as to question the West's role in the federation.

Political fallout is just beginning, as TransCanada announces it won't proceed with 2 projects

TransCanada is closing the book on its proposed Energy East pipeline, but the political fallout is just beginning, with Conservatives hammering the Liberals over their "disastrous" energy policies and Saskatchewan's premier going so far as to question the West's role in the federation.

On Thursday, the company announced it won't proceed with its Energy East Pipeline and Eastern Mainline proposals, citing existing and likely future delays resulting from the regulatory process.

The proposed Energy East project would have carried oil from Alberta and Saskatchewan across the country to be partly refined in New Brunswick. It would have added 1,500 kilometres worth of new oil pipelines to an existing network of more than 3,000 kilometres, which would have been converted from carrying natural gas to carrying oil.

Natural Resources Minister Jim Carr was firm Thursday that the cancellation was a "business decision."

"Ultimately, it's not up to me to explain why TransCanada made this decision on the basis of what's in its interest. I respect that," he told reporters. 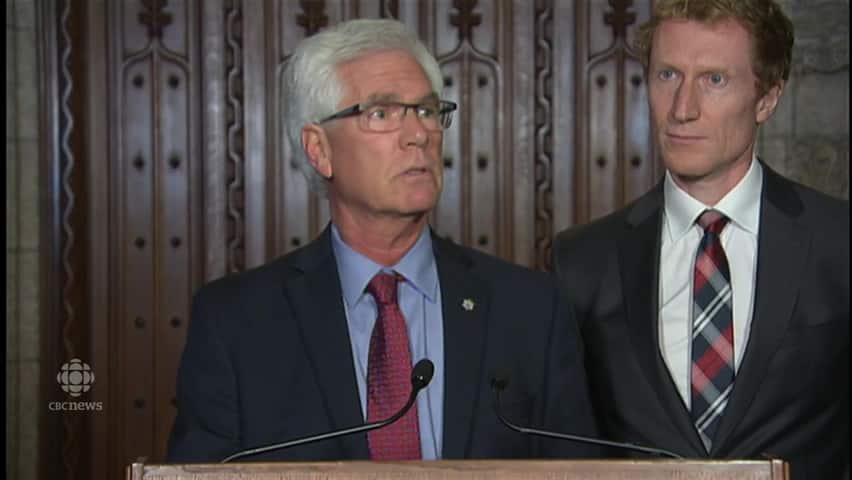 "Nothing has changed in the government's decision-making process."

In January 2016, the government announced that pipeline projects will face a new environmental assessment process, including a greenhouse gas emissions analysis.

Carr maintains the Liberals would have used the same process to evaluate the Energy East pipeline project that was used to green-light the Trans Mountain expansion — which is in a Federal Court of Appeal this week — and Line 3 projects back in November.

"The government of Canada stands firmly behind the energy sector as a source of good, middle-class jobs … We are open for business."

Saskatchewan Premier Brad Wall blamed the project's failure on the National Energy Board's August decision to ask for the impact of upstream and downstream emissions from potential increased consumption of oil.

"Something needs to change. For the West to continue on like this in our federal system is the equivalent of having Stockholm syndrome."

"[Prime Minister Justin Trudeau's] actions and his government's actions may well will have some westerners wondering if this country really values western Canada, the resources we have, and the things we do to contribute to the national economy and to quality of life for all."

New Brunswick Premier Brian Gallant's response was a few notches down on the anger scale. In a statement he said the company's decision not to move forward is "not good news" for those who wanted to see the pipeline built, including his government. The project would have would have carried 1.1 million barrels of crude oil a day from Alberta to Saint John.

Gallant said over the past few years he has spoken to "almost every member of the federal cabinet about the merits of the project" and had sent a letter to the prime minister after hearing that TransCanada was suspending its application.

"We believe it is clear that TransCanada is not proceeding with its application for the Energy East pipeline because recent changes to world market conditions and the price of oil have negatively impacted the viability of the project," said Gallant.

"We believed if TransCanada continued with the process, the project would be approved. We still believe that."

Alberta Premier Rachel Notley said there were a number of factors at play, but called it an "unfortunate outcome for Canadians."

"The [National Energy Board] needs to send a clear message on what the future of project reviews look like in Canada," she said. "Investors need confidence, and we look forward to seeing that certainty in place soon."

The Conservatives immediately put the blame on the governing Liberals.

Terrible news this morning about the Energy East pipeline. Make no mistake, Justin Trudeau is to blame. 1/5

"Today's announcement is not the result of a sudden decision by TransCanada. Instead, today is a result of the disastrous energy policies promoted by Justin Trudeau and his failure to champion the Canadian energy sector," she said.

"Everything that Justin Trudeau touches becomes a nightmare."

"Canada will now continue to import foreign dictator oil into our refineries instead of Alberta oil, it's shameful," tweeted Brian Jean, who's running to be leader of the United Conservative Party in Alberta.

"A huge blow to our economic future, a huge win for dictator oil. The NEB clearly did Trudeau's bidding in jeopardizing this critical project," added his opponent Jason Kenney.

According to 2015 numbers from the Department of Natural Resources, Canada imports just under a million of barrels of crude oil per day and exports about three million barrels a day. Its top import source is the United States, followed by Saudi Arabia.

The reaction was different in Montreal where Mayor Denis Coderre called the abandonment "a major victory" for municipalities and Indigenous groups.

"I've been saying since day 1 they were arrogant and condescending," he said of TransCanada. "It was a bad project."

The mayor of Saint John, N.B., home to the refineries which hoped to process some of the oil from Energy East, shot back on Twitter.

"This was an opportunity for our country to come together and we failed. How would Mayor [Coderre ] feel if we blocked Bombardier or dumping in river?" wrote Don Darling.

TransCanada says it will take a $1-billion charge to write down the project on its books in its next quarterly results.

It isn't the only company to pull out of a major energy project this year. In July, Pacific NorthWest LNG announced it was cancelling its plans to build a liquid natural gas liquefaction and export facility in Port Edward, B.C.

The company said it made the decision to cancel the $36-billion project after "a careful and total review of the project amid changes in market conditions."