The greenhouse gas emissions from oil flowing through TransCanada Pipelines' proposed Energy East project would be equivalent to putting seven million new cars a year on Canadian roads, according to a report from an environmental think-tank released today. 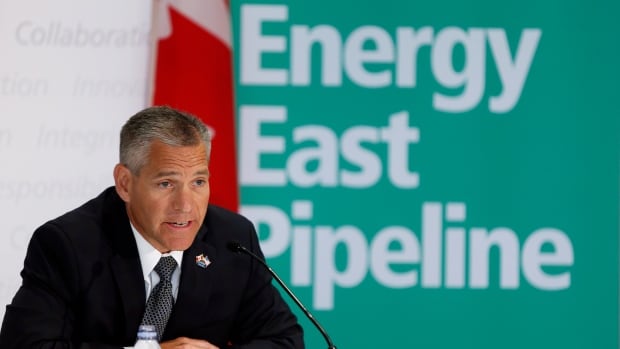 7 years agoVideo
1:59
Pembina Institute's study looked at the potential upstream carbon pollution flowing through the pipeline and found it could add anywhere from 30 to 32 million tonnes of CO2 to the atmosphere yearly 1:59

The greenhouse gas emissions from oil flowing through TransCanada Pipelines' proposed Energy East project would be equivalent to putting the emissions from seven million cars a year on Canadian roads, according to a report from an environmental think-tank released today.

The Pembina Institute's study looked at the potential upstream carbon pollution — that is, from the well to the refinery gate — oil flowing through the pipeline and found that it could add anywhere from 30 to 32 million tonnes of CO2 a year to the atmosphere.

"For a single piece of infrastructure, that's huge. It's more than the emissions of five provinces," explained Clare Demerse, Pembina's federal policy director and co-author of the report.

Energy East is planned to take both conventional and oilsands oil from Alberta to the deep-water port in Saint John. The project would convert an existing natural gas pipeline that runs to the Ontario-Quebec border to carry oil, then build a new pipeline the rest of the way. When running at full capacity, Energy East would eventually carry 1.1-million barrels of crude a day.

TransCanada has yet to file an application with the National Energy Board, but it is expected to do so in the middle of this year.

The production of oilsands oil creates more than double the carbon pollution of conventional oil production, according to a study by the U.S. Department of Energy's National Energy Technology Laboratory.

The Pembina report assumes that 1.1 million more barrels a day of oilsands oil would be produced if the pipeline is brought into operation. Getting that oil out of the ground would add 32 million tonnes of carbon pollution, the report argues.

"The oilsands are going to be developed because it is economic to do so. If you prevent pipelines from being built, all that's going to happen is the oil is going to move by other means, largely rail and truck," said Alex Pourbaix, TransCanada president of energy and oil pipelines.

The Canadian Association of Petroleum Producers (CAPP) didn't agree with Pembina's methodology either and pointed out that a pipeline hearing is the wrong place to talk about oilsands production.

"The discussion for greenhouse gas issues related to oil production happens at the time the production projects themselves are approved. To discuss them again as part of the pipeline regulatory process would be duplicative," wrote CAPP vice-president of markets and transportation Greg Stringham in a statement to the CBC.

But University of Alberta energy economist Andrew Leach points out there are contradictions in the industry's arguments if you look them over the last five years. He points to a 2009 Pembina report that highlighted the industry rationale that the proposed Northern Gateway pipeline from Alberta to the B.C. coast was crucial for oilsands expansion.

"You can't argue on one hand that the pipeline is crucial and on the other that it does nothing," he said.

Demerse admits that this is a preliminary report and that it is hard to comment accurately on Energy East because so little detail is known about the project. Still, she said, Pembina wanted to start the conversation about it as soon as possible.