Indigenous Services Minister Marc Miller said today that Mi'kmaw fishermen in Nova Scotia have been "let down by police" following incidents of violence in the province's southwest over the Sipekne'katik band's lobster fishery.

Indigenous Services Minister Marc Miller said today that Mi'kmaw fishermen in Nova Scotia have been "let down by police" following incidents of violence in the province's southwest over the Sipekne'katik band's lobster fishery.

"We must also recognize that once again, as evidenced by the scenes of violence, Indigenous people have been let down by the police, those who are sworn to protect them," he told a news conference in Ottawa this morning.

"Throughout history, Indigenous peoples have experienced continuous discrimination and to this day still suffer the consequences of colonial practices, but they have shown an extreme resilience and courage in standing up for their rights."

The four Liberal cabinet ministers have joined the NDP in calling for an emergency debate in the House of Commons on the escalating conflict between commercial fishermen and Mi'kmaw fishers in southwestern Nova Scotia, which has become increasingly violent in the last week.

Two lobster facilities in southwest Nova Scotia were targeted and vandalized by commercial fishermen last week. One of the facilities, located in Middle West Pubnico, N.S., was destroyed in a Saturday blaze RCMP have deemed suspicious. 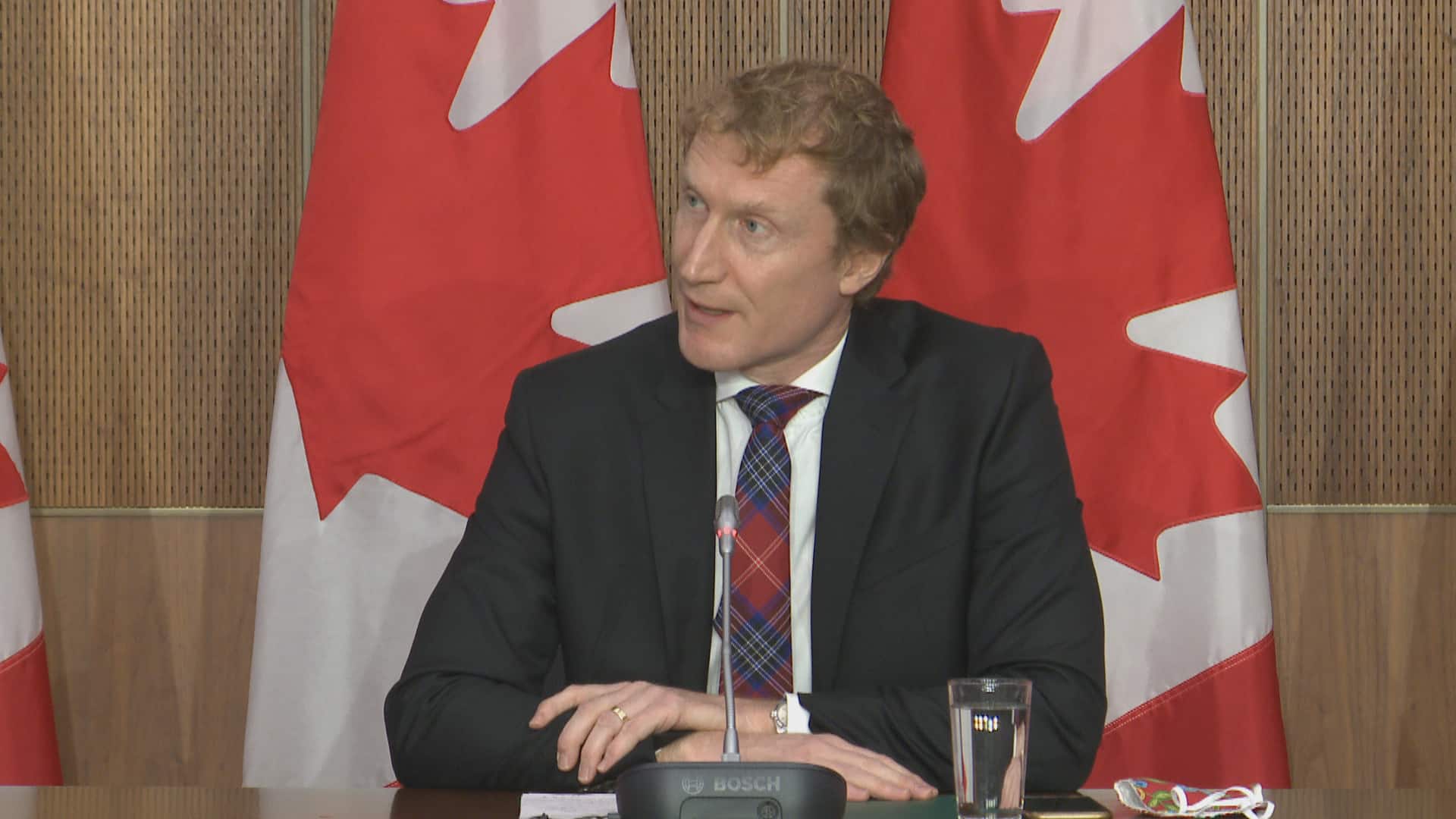 1 month agoVideo
1:53
Federal cabinet ministers spoke in Ottawa earlier today about escalating tensions in Nova Scotia's lobster fishery. Indigenous Services Minister Marc Miller said the violence of the past few days is evidence that Indigenous peoples have been "let down" again by those whose job it is to protect them. 1:53

A Digby County, N.S., man has been arrested and charged in relation to an assault on Sipekne'katik First Nation Chief Mike Sack, and a Yarmouth County man has been charged with arson after a vehicle was torched outside a lobster facility in New Edinburgh.

The RCMP's response to the violence has been met with criticism, with Chief Sack calling on the government to send the military instead.

"In the case of violence, intimidation and terrorist activities, the RCMP has done little to protect the rights of Indigenous people who are practising their treaty rights," he said during a separate news conference Monday morning.

1 month agoVideo
2:33
The tense standoff between Mi'kmaw lobster fishers and commercial fishermen saw a dangerous acceleration over the weekend, with the burning of a lobster storage facility where Mi'kmaw fishers were storing their catches. RCMP have called in reinforcements in hopes of de-escalating the situation. 2:33

Blair said he doesn't belive the situation needs a military response, and he has spoken to RCMP Commissioner Brenda Lucki about the force's responsibility.

"The violence and harassment and intimidation that we have seen in Nova Scotia are completely unacceptable, cannot continue and must stop now,"  he said Monday.

"The reckless violence and the racist threats we have seen do nothing to bring us closer to a resolution."

Blair, whose portfolio includes the RCMP, agreed to a request from Nova Scotia's attorney general over the weekend to boost the RCMP's presence on land and on the water. That presence includes a number of Indigenous officers from Nova Scotia, Prince Edward Island and New Brunswick, he said.

"I've spoken this morning and over the weekend to the RCMP commissioner, and she has assured me that she has the resources necessary to manage the situation on the ground and uphold the law."

Blair said his government knows there is a need for significant reform to how police work in Indigenous communities.

WATCH | Public safety minister is asked if police are failing the Mi'kmaq in N.S. lobster dispute:

Public safety minister is asked if police are failing the Mi'kmaw in N.S. lobster dispute

"I do acknowledge that there are there are concerns within Indigenous communities," he said. "We're working hard to resolve them."

In an op-ed in the Chronicle Herald, the head of the RCMP's union defended his members while arguing that the dispute isn't a police matter.

"Disputes related to fisheries laws are, regrettably, not new. But they're also, at their core, not policing issues. They're inherently political issues that we are calling on federal and provincial governments to address in partnership with Indigenous Peoples and all affected parties," wrote Brian Sauvé, president of the National Police Federation.

"Years of cuts to front-line services by governments of all levels, political stripes and jurisdictions have left police officers across Canada increasingly tasked with responding to situations that go far beyond crime prevention and law enforcement."

Commercial fishermen in Nova Scotia have been protesting the fishery launched by Sipekne'katik First Nation last month. The First Nation's right to run the fishery was affirmed by a 1999 Supreme Court ruling.

The 21-year-old decision, known as the Marshall decision, affirmed the Mi'kmaq right to operate a "moderate livelihood" fishery. Multiple parties have called for a clearer definition of that term.

The Sipekne'katik fishery operates outside the federally mandated commercial season. Commercial fishermen say they worry about its impact on lobster conservation — an argument Sack is trying to discredit.

'We do see a path forward': minister

Colin Sproul, president of the Bay of Fundy Inshore Fishermen's Association, disagrees, saying it's not sustainable for anyone to fish lobster breeding and molting grounds during the closed season.

"The real gulf between Chief Sack's position and mine is this: we respect and support Indigenous fishery access rights, which was ratified by the Marshall decision, but we respect the entire decision," he said.

"The paramount regulatory objective is conservation and responsibility for it falls squarely on the minister responsible, not on the Aboriginal or non-aboriginal users of the resource. Full Stop. So under existing Canadian law, Chief Sack doesn't possess the authority to issue lobster licences in Canada."

The Marshall decision ruled that the federal government and provincial governments have the authority to regulate the exercise of a treaty right "where justified on conservation or other grounds," and said that Indigenous communities are entitled to be consulted about any limitations.

"The minister has available for regulatory purposes the full range of resource management tools and techniques, provided their use to limit the exercise of a treaty right can be justified on conservation or other grounds," it reads.

Jordan said conversations with the band continue behind close doors.

"We do see a path forward," she said.

Chief Sack told CBC News this morning that his band is willing to work with the department on a "joint management" plan.

"We're willing to work with [the Department of Fisheries and Oceans] with a joint management type of thing. We're going to spearhead it. Rights aren't going — we're not giving anything under rights at all. Conservation will be our main concern."

House Speaker Anthony Rota today granted a request for an emergency debate on the issue. It will take place later tonight, after the adjournment of the day's proceedings in the House of Commons.

The request for an emergency debate was first issued by NDP MP Gord Johns on Sunday.

"Sadly, insufficient action has been taken by the federal government to ensure the safety of this community and its fishers, nor to deal with the underlying legal and constitutional issues, which are its root cause," the critic for fisheries and oceans wrote.

New Democrats will call for an Emergency Debate in Parliament on <a href="https://twitter.com/hashtag/MikmaqRights?src=hash&amp;ref_src=twsrc%5Etfw">#MikmaqRights</a>.<br><br>The Mi'kmaq people have been terrorized.<br><br>Justin Trudeau must take immediate action.<br><br>For updates, text me "Yes" at 604-200-3470. <a href="https://t.co/0XtFsJfDG1">pic.twitter.com/0XtFsJfDG1</a>

With files from CBC Nova Scotia