Elizabeth May calls it quits. Could the Greens do better with someone else?

Elizabeth May took the Green Party as far as she could. And while that was farther than anyone was predicting when she became the party's leader in 2006, she fell short of both hopes and expectations in the recent general election.

Over the last decade, Elizabeth May became one of the strongest and most widely known personalities in Canadian politics. Under her leadership, the Green Party of Canada achieved the best results in its 35-year history.

Also under May, the Greens peaked at less than seven per cent of the popular vote and three seats in a 338-member House of Commons.

This is where the challenge lies in assessing May's leadership and legacy.

By any measure, she's the most successful leader in her party's history. But that success was limited. And it's fair to ask whether she and her party should have accomplished much more, particularly in the recent general election.

To May's credit, her share of the political oxygen around Parliament Hill consistently exceeded her party's share of popular support.

She convinced Stéphane Dion to not run a Liberal candidate against her in 2008 — when she chose to pursue a long-shot campaign against Peter MacKay in the Nova Scotia riding of Central Nova — and then talked her way into the televised leaders debates despite the fact that her party had never won a seat.

After she was elected in 2011 — defeating a Conservative incumbent in Saanich-Gulf Islands in British Columbia — she became a prominent voice calling not only for action on climate change but also for better decorum in the House of Commons and more respect for the sovereign power of Parliament. She was a constant presence in the House and a regular guest at parliamentary committees, where she would turn up bearing amendments she wished to propose.

She took advantage of every opportunity afforded her as a member of Parliament, all while making her case that the institution, its members and political parties needed to change. The Greens, she vowed, would be different — if they could ever elect enough MPs to form a proper caucus.

In 2008, her first election as leader, the Greens received 6.8 per cent of the vote, a two-point jump over the previous election result; the party still failed to elect an MP. Three years later, the Greens focused their efforts on getting May into the House. They succeeded, but the party's national support slipped to 3.9 per cent. In 2015, its share of the popular vote fell again, to 3.5 per cent.

The Greens elected their second MP in May when Paul Manly won a by-election in British Columbia. He and May were then joined in October by Jenica Atwin, who pulled off a surprise victory in Fredericton. 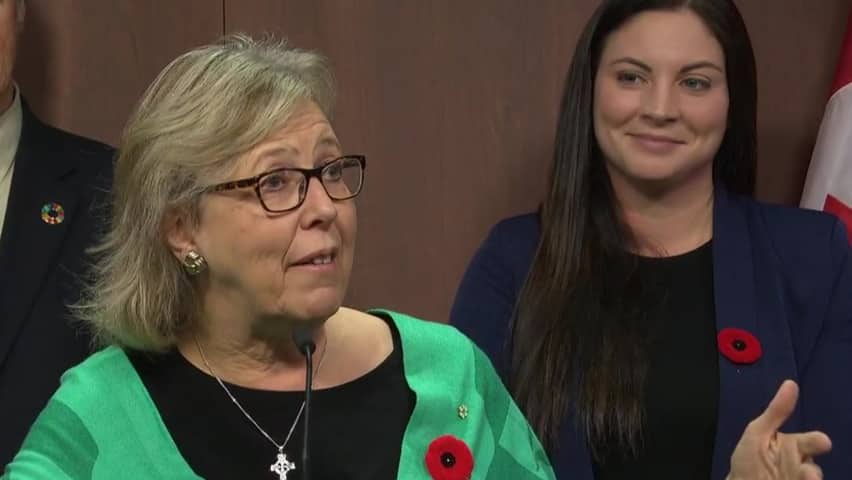 Elizabeth May says she's not done yet

1 year agoVideo
1:02
Elizabeth May, who stepped down as Green Party Leader, is asked about how she would like to be remembered. And newly elected Green MP Jenica Atwin shares her thoughts about May. 1:02

In early September, the Greens were polling at 11 per cent and seemed to have a shot at overtaking the New Democrats for third place. The NDP was weaker than it had been in 15 years, and the issue of climate change — the Green Party's raison d'être — was more salient than it had ever been. It was possible to imagine the Greens winning a dozen or more seats.

In announcing her departure on Monday, May boasted that the Greens received more than a million votes in this year's election. But the party's share of the popular vote — 6.5 per cent — was still below the 2008 mark.

She also celebrated the fact that the party had "doubled" its vote in Quebec — which sounds more impressive if you don't know that means the party went from 2.3 per cent in Quebec in 2015 to 4.5 per cent this fall.

While NDP Leader Jagmeet Singh had a solid launch and picked up momentum as the campaign went on, May never seemed to recover from a series of early stumbles — first over her party's position on abortion and then over the question of whether the Greens welcomed separatists.

The former controversy ended with May saying her party would review the candidacies of two people who had made anti-abortion comments in the past. The latter ended with May trying to claim there was a distinction to be drawn between separatists and sovereigntists.

May prides herself on being a different kind of politician, one less beholden to talking points and party discipline. But in this campaign, she and her party just didn't seem to be ready for their close-up.

The 2019 election was also the first in which the Greens found themselves the target of rivals' attacks — particularly on Vancouver Island, where the NDP directly challenged May's party. May has complained about the NDP's tactics, but they seem to have successfully prevented the Greens from making greater gains. And winning seats is the measure of political success that counts most.

The next Green leader has an opportunity to learn from these experiences.

A Green Party under a dynamic new leader could not be counted out. Such a leader would at least inherit more of a foothold than May did. And there are greater signs of life for Greens at the provincial level.

The legislature in Prince Edward Island includes eight Green MLAs, enough to form the Official Opposition. Three Green MLAs in British Columbia hold the balance of power. There are three more Green MLAs in New Brunswick and a Green MPP in Ontario.

If the Green Party is to ever become a truly significant national force, those could be useful starting points.

Unlike, say, the Marijuana Party, the Green Party's primary concern is unlikely to be completely addressed in the near future. If anything, climate change will only become more relevant and pressing, and even more intertwined with every other facet of public policy.

But as the last campaign ably demonstrated, Green success is not a given.

May took the Greens as far as she could — she got a foot in the door and she did so loudly. Now the Greens have to find someone who can push the party much further.