The leader of Canada's Green Party said Wednesday climate change was partly to blame for the wildfire devastating Fort McMurray, Alta., touching off a debate about whether it was the right time to discuss the causes of the conflagration.

The leader of Canada's Green Party said Wednesday climate change was partly to blame for the wildfire devastating Fort McMurray, Alta., touching off a debate about whether it was the right time to discuss the causes of the conflagration.

"Of course," Elizabeth May said Wednesday when asked if there was anything about the fire that is linked to global warming. "The temperature records were being smashed through last month for northern Alberta," she said, while noting that no single event is caused by climate change alone. "It's due to global emissions.

"Scientists will say we know with a destabilized climate, with a higher average global temperature, we will see more frequent, more extreme weather events ... due to an erratic climate, due to our addiction to fossil fuels."

Later, in a statement sent to reporters, May said she wasn't directly tying the Fort McMurray wildfire to climate change. "No credible climate scientist would make this claim, and neither do I make this claim," she said, while urging Canadians to take collective action to mitigate the impact of "extreme climate events." 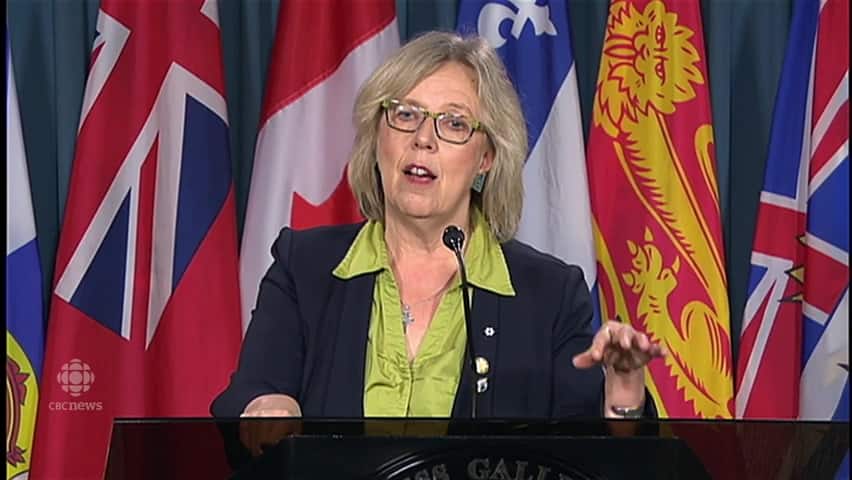 Elizabeth May says 'of course' there's a link between forest fires, climate change

Prime Minister Justin Trudeau declined to make a direct link between the fire — which has forced some 80,000 people out of their homes — and climate change, at least while the embers are still burning.

"It's well-known that one of the consequences of climate change will be a greater prevalence of extreme weather events around the planet, however any time we try to make a political argument out of one particular disaster I think there is a bit of a shortcut that can sometimes not have the desired outcome.

"Pointing at any one incident and saying, 'Well this is because of that,' is neither helpful nor entirely accurate," he said. "What we are focussed on right now on is giving the people of Fort McMurray, and across Alberta, the kind of support that they need."

"It's not the time to start laying blame," he told reporters in the foyer of the House of Commons. "Our only thoughts today are for the people in those communities and I want to make sure that the federal government does everything it can to help the Notley government."

Experts agree that climate change is at the heart of the ongoing problem of more intense wildfires, but they warn against drawing causal links to the Fort McMurray fire directly.

"I think it's always dangerous to associate any individual event with climate change because I think those are connections that are a bit difficult to make," said Toddi Steelman, the executive director of the school of environment and sustainability at the University of Saskatchewan, and an expert on forest fires, in an interview with CBC News.

There is a dangerous cocktail of conditions that is ravaging the forests of western Canada. One ingredient is global temperatures that have increased as a result of greater greenhouse gas emissions, Steelman said, resulting in drier forests that are more susceptible to ignition.

Forest fires are also having a greater impact because more people are living closer to heavily forested areas prone to fire.

"Fort McMurray is a doughnut hole in a sea of Boreal forest," Steelman, said. "We would expect it to burn, but what's unusual is that we didn't always have communities living smack dab in the middle of it."

The Boreal forest, which covers large swathes of northern Canada, is shaped by forest fires. Indeed, trees drop seeds when they burn. Hundreds of thousands of acres burn every year — part of a forest's natural regeneration, said John Innes, the dean of the faculty of forestry at the University of British Columbia.

But the speed at which snow melts each year has become entirely unpredictable, meaning it's difficult for government to forecast just how long, and damaging, wildfire season will be, Innes said in an interview.

"There has been less snowfall. We are seeing, right now, a very low snow pack in northern British Columbia extending into Alberta. Everything is drying out much earlier than what would normally be the case.

"We're in a territory that we've never seen before. We don't really understand some of the things that are happening with the climate system and it's kind of worrying," he said.