Democracies around the world are grappling with new threats to democracy in the digital age, from foreign actors tampering with voting systems to the viral spread of disinformation through social media.

With the U.S., U.K. and various European countries still reeling over the explosion of fake news on platforms such as Facebook and Twitter, acting Chief Electoral Officer Stéphane Perrault said he believes Canadians are better prepared than many others to spot fake political news after the high-profile 2011 "robocalls" scandal and the recent U.S. presidential election.

"I think there was a vigilance that emerged from that situation, and that is also, of course, built on the U.S. situation," he said.

The robocalls voter suppression scandal involved automated calls made to deter voters from casting ballots by telling them the location of their polling stations had changed.

A research paper prepared for Elections Canada shows a high, and increasing, level of trust among Canadians in traditional and online media, as well as in government institutions. The opposite is true in the U.S., where that trust has crashed, according to research surveys included in the paper.

"That's fairly significant in terms of the level of literacy about the issue of fake news," Perrault said. "I think we have to be not complacent about it, but I do think that the population is perhaps more ready for it than the American population was in the presidential election."

Perrault said it's too early to determine the level and scope of the risk Canada faces in the 2019 vote compared to the last election in 2015. Elections Canada is working with other government departments and security agencies to strengthen the cyber security network and boost public awareness as prevention tactics.

A report based on a meeting of international experts published by the Canadian Security Intelligence Service (CSIS) in February 2018 warned that western democracies face a "torrent" of lies and distortions by agents of disinformation that threaten the integrity of public discourse, debate and democracies. It flagged Russia as "the most skilled national purveyor of falsehoods."

They are allegations Russia disputes.

"Baseless allegations about the so-called 'Russia meddling' have reached a new level of absurdity by blaming Moscow in advance. The McCarthy type witch hunt that is now the norm in the U.S. could easily overwhelm Canada if hypothetical Russophobia-driven theories are taken at face value," said Kirill Kalinin, spokesperson for the Embassy of Russia in Canada.

'Canada is not immune'

"Disinformation poisons public debate and is a threat to democracy," the CSIS report said. "Raised public awareness is needed to distinguish the real from the false. There are many ways for governments and organizations to counter the threat, but there is no guarantee that even effective counter-campaigns can defeat the high volume flow of malicious communications."

A June 2017 report from the Communications Security Establishment that was commissioned by the government also warned of increased threats to democratic processes around the world, and concluded that "Canada is not immune."

Elections Canada has already made "significant investments" to improve IT security, including a new data-hosting service with enhanced protections. An independent audit will be carried out this spring to determine whether gaps remain.

"We've made a number of improvements, and we want a third pair of outside eyes to look at this and see what's missing. We know we have some improvements to make, and we're making them," Perrault said.

While the agency beefs up these high-tech safeguards, it will keep using paper ballots for voting — a low-tech method that is considered more secure and less vulnerable to a cyber-attack.

Perrault said staff will carefully track social media posts during the campaign, and will fight fake information with facts on where, when and how to vote.

"We have a responsibility to continue to be vigilant," he said Monday. "This is a whole-of-government approach."

"We also expect that social media platforms do everything they can and maintain a responsibility for defending the integrity of our electoral system," he said.

Canada has finance rules governing political fundraising from foreign actors, and Bill C-50 — which passed the House and is now before the Senate — proposes additional measures to increase fundraising transparency. 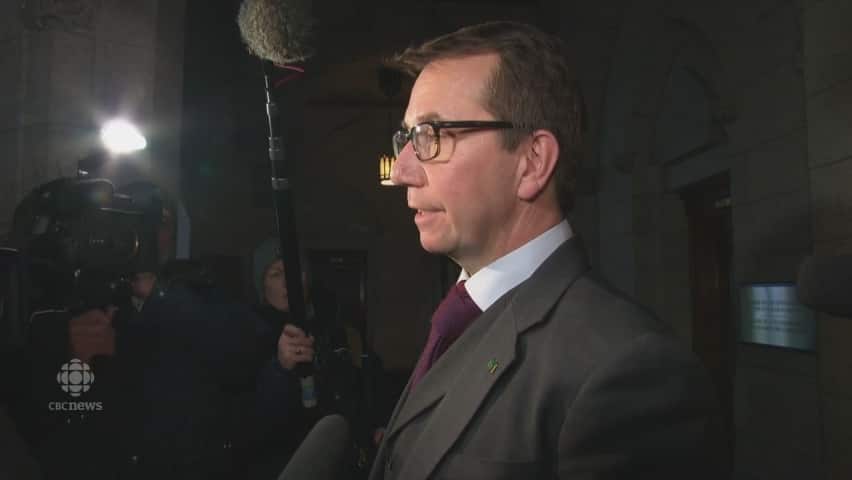 3 years ago
0:44
Scott Brison is the acting Minister for Democratic Reform 0:44

Alicia Wanless, director of strategic communications at The SecDev Foundation and a researcher in information warfare and propaganda, said disinformation that affects the choices voters make likely poses a bigger threat to a fair electoral process than electronic hacks from outside Canada.

Fake news thrives in polarized domestic political environments, which can then be exploited by foreign actors, she said.

"I think we've had a problem in the public realm being able to discuss certain problems that we have as a society, and with those things not being addressed, they're ripe for exploitation. Not just by foreign actors but domestic political actors, too," she said.

Documents from Elections Canada released under Access to Information show the agency has formed working groups to discuss political financing, fake news and how "bots" (software applications that perform automated tasks) could be used to disrupt next year's election.

"Imagine a political bot-driven campaign which replicates what we saw with the robocalls scandal. This could happen on any number of social media platforms or instant messaging apps and would be very hard to trace," she said.

The federal government could create a registry to track the use of political automated social media, and a code of conduct for parties requiring them to explain clearly when and how they use bots, she said.

But the rapid pace of technological advancement makes it impossible to anticipate every threat and implement every safeguard, she added.

"Will we patch every single hole? No, because technology advances and so do techniques for using that technology for whatever it is you want to do, whether that serves democracy or not," she said.