Canada's Trade Minister Ed Fast confirms he will be in Atlanta next week for another round of negotiations toward a Trans-Pacific Partnership deal that would bring together 12 countries from Chile to Japan into a single free-trade zone. 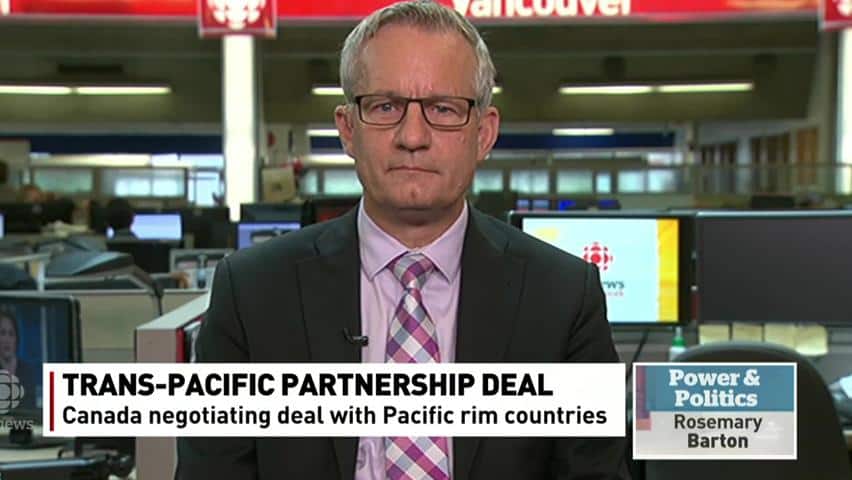 5 years agoVideo
8:25
Trade Minister Ed Fast discusses the Trasn-Pacific Partnership negotiations that are due to restart in Atlanta 8:25

Canada's Trade Minister Ed Fast says he will travel to Atlanta, where chief negotiators for a dozen countries including the U.S., Japan and Mexico are hoping to conclude a massive Pacific Rim trade agreement.

"I will be in Atlanta next week," said Ed Fast during an interview on CBC News Network's Power & Politics on Wednesday, confirming for the first time his participation in what could be the final round of negotiations.

A four-day meeting of chief negotiators has been confirmed for Sept. 26, followed by a meeting of trade ministers on Sept. 30.

The proposed Trans-Pacific Partnership deal would bring together 12 countries from Chile to Japan into a single free-trade zone.

Conservative Leader Stephen Harper said last week there are parts of the proposed trade deal that the domestic auto industry would not like.

Fast rejected the assertion made by Unifor president Jerry Dias that Canada could lose as many as 24,000 jobs if foreign automakers are allowed to import vehicles tariff-free into Canada with substantially less North American-made content than rules currently allow for.

"Absolutely not," Fast told Power & Politics host Rosemary Barton. "No one knows where Mr. Dias got those numbers from."

Fast insisted that Canada used this week's trade meeting in San Francisco as an opportunity to push for demands around the "automotive rule of origin," a term that describes how much content in autos and auto parts must be made within the North American Free Trade Agreement.

Under NAFTA, the rule is that 62.5 per cent of the value of cars and 60 per cent of auto parts must be made within the region.

"It was Canada that walked away from the table in Maui," Fast said, "because the deal that was on the table on autos was one that did not meet the test: Is it in Canada's best interest?"

The Automotive Parts Manufacturers' Association, in an open letter posted on its web site, said it "strongly opposed" what it deemed "an unreasonably low proposal" from Japan and called on Canada to secure a 50 per cent content rule for cars and parts.

"I can assure you that at the end of the day," Fast said on Power & Politics, "in consultation with the auto industry including the manufacturers, the auto parts manufacturers, we are going to come up with an agreement that is going to serve the industry very, very well going forward."

Fast said a TPP deal without Canada would see North American investors turn to the U.S. and Mexico.

"If we walk away now, there's a tremendous cost that our economy will pay," he said. 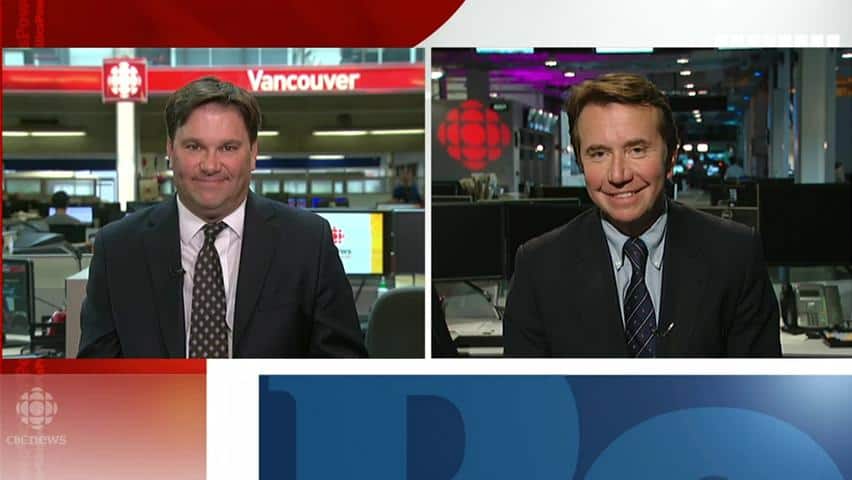 Should the Conservatives fail to reach a deal before the federal election on Oct.19, Davies said, an NDP government would fight "tooth and nail" to protect Canada's auto sector.

Davies said the NDP believes Canada should be at the negotiating table of a Pacific Rim trade agreement, but the party isn't prepared to give the Conservatives "a blank cheque," per se.

"We're not going to endorse or support an agreement that we haven't read or seen yet,' he said on Power & Politics.

Liberal Scott Brison, who appeared alongside Davies, criticized the Conservative government for not being more forthcoming with Canadians.

"There's no transparency from this government about what is actually on the table."

Fast said that negotiating a trade deal in public would only serve to hurt Canada's national interest.

"Quite frankly, the fact that we are in the middle of an election should not undermine our efforts to keep Canada at the TPP table, because it's in our national interest to do so."

While the Conservatives would undoubtedly use a TPP deal to bolster their economic record during an election campaign, Fast rejected the notion his attendance at the negotiations was to win votes.

"By no means is the fact that we're at the table today a political gesture," he said.