Economy will be focus of fall session, Harper tells MPs

Prime Minister Stephen Harper addressed Conservative MPs in Ottawa Thursday and stuck entirely to the subject of the economy, sounding more positive notes than he has recently. 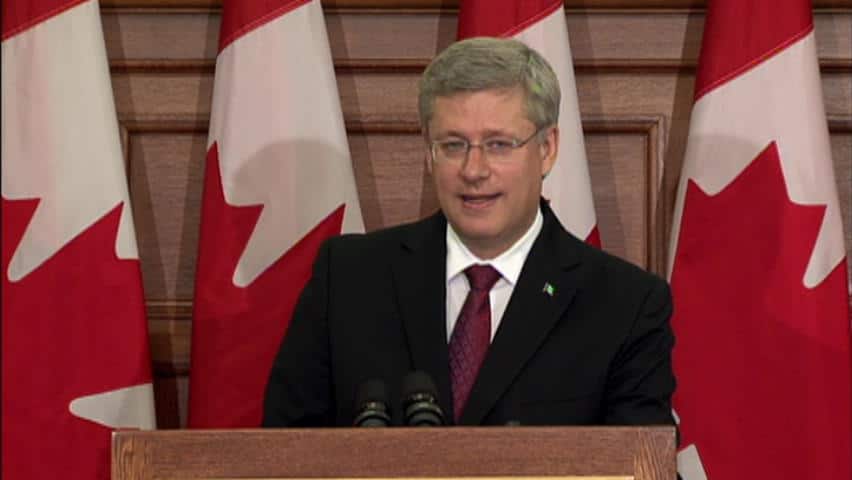 Prime Minister Stephen Harper addressed Conservative MPs in Ottawa Thursday and stuck entirely to the subject of the economy, sounding more positive notes than he has recently.

The Conservative caucus is meeting to get ready for the new session of Parliament that starts Sept. 19.

"Circumstances demand that we listen carefully to Canadians and that we be flexible when necessary," he said during his brief speech, which was open to the media.

Harper urged the caucus to work to preserve and promote Canada.

"If we are faithful to these things, I believe our government's best days and, above all, our country's best days still lie ahead."

"How can the prime minister believe that everything is fine when so many families – 60 per cent – have trouble making ends meet?" she said.

The NDP oppose a scheduled decrease to the corporate tax rate and support raising corporate taxes to eliminate the deficit and pay for social programs. Business taxes are set to go down to 15 per cent Jan. 1, 2012. The NDP would raise them to the 2010 rate of 18 per cent.

Turmel says Harper is seeing the world through rose-coloured glasses.

Heading into the Conservative caucus meeting, Finance Minister Jim Flaherty said the Senate Finance Committee has agreed to study the differences between U.S. and Canadian retail prices. Many products – including books, magazines and clothes – cost less in the U.S., despite near parity with the Canadian dollar.

Asked what he can do about the issue, Flaherty said, as finance minister, he is responsible for tariffs.

"Sometimes people in the retail business blame tariffs and so on, so I want to see. And I want to know what the facts are, and I'm looking forward to the Senate committee getting to the facts," he said.

"Part of it is just making sure the participants in the retail economy come clean about how they price."

The Conservatives are expected to re-introduce their justice measures in the upcoming session of Parliament.

They've promised to pass an omnibus crime bill within 100 sitting days in office. The government is also planning for a round of budget cuts and have asked every federal department and agency to submit proposals for five and 10 per cent budget cuts. Those are expected to be included in the 2012 budget.

Government House Leader Peter Van Loan said the government will soon table its bundled crime bills, but wouldn't say how many would go into the expected omnibus bill.

He also reiterated the commitment to increase the number of seats in the provinces with the biggest populations.

"And also moving forward with things like changes to the way our Wheat Board operates and to eliminate the long gun registry."

The governing party is going to face three opposition parties in the House of Commons without permanent leaders: the NDP, Liberals and Bloc Québécois all have interim leaders facing off against Harper in the House of Commons this fall and are going to have their focus split between work in Parliament and leadership races or rebuilding their parties.

MPs are also still adjusting to the make-up of the House since the May 2 election, when the NDP became the official opposition and the Liberals and Bloc returned with much smaller caucuses. They only had a couple of sitting weeks before they rose for the summer.

Six provincial and territorial elections, plus a leadership race in Alberta's governing party, could also change the federal political calculus.