The president of Philippines made it clear he’s no fan of Justin Trudeau’s, telling a crowd he felt personally insulted after the Canadian prime minister raised human-rights concerns and the bloody drug war in the southeast Asian country.

Trudeau describes the meeting's tone as 'cordial,' while Duterte says he was insulted

The president of Philippines had made clear he's no fan of Justin Trudeau, telling a crowd he felt personally insulted after the Canadian prime minister raised human-rights concerns and the bloody drug war in the southeast Asian country.

Human rights activists have urged President Rodrigo Duterte to end his crusade against alleged drug dealers and addicts that groups say has left at least 7,000 dead.

Duterte has said all such killings are legal acts of self-defence by police — or have been carried out by "vigilantes" with no ties to the president — and he has vowed to continue the anti-drug campaign until the end of his presidential term in 2022.

Duterte maintains tough police action — eliminating crime by eliminating criminals — is necessary to restore order in a country that has seen a surge in drug-related violence.

Trudeau said he told Duterte about the need for the rule of law in the Philippines and offered to help the country move forward.

Speaking to reporters in Manila at the end of the Association of Southeast Asian Nations (ASEAN) summit, Trudeau described the talks as "cordial."

Duterte had a different interpretation.

"I said, 'I will not explain.' It is a personal and official insult," said the Philippines president recalling his conversation with Trudeau.

"It angers me when you are a foreigner you do not know exactly what is happening in this country. You do not investigate." 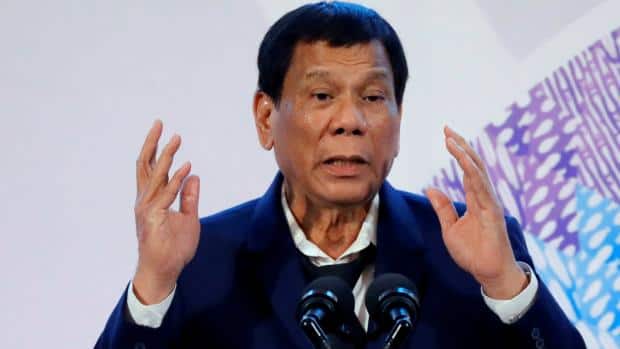 3 years agoVideo
0:51
'It is a personal and official insult,' says Rodrigo Duterte 0:51

During a closing press conference Duterte continued to come back to the issue of "foreigners."

"I only answer to the Filipino. I will not answer to any other bullshit, especially foreigners. Lay off," he said.

Trudeau said Canada has "a reputation for being able to have strong and frank, sometimes firm, discussions around the rule of law and human rights with its partners.

"It's very much what people expect of Canada, and it comes as no surprise when we bring it up," he said at the final news conference of his whirlwind eight-day swing through Asia.

"The president was receptive to my comments, and it was, throughout, a cordial and positive exchange."

It's not the first time Duterte has gone after a Western leader for raising issues around the war on drugs and extrajudicial killings.

Last year, he called U.S. president Barack Obama a "son of  bitch" and declared that he was breaking ties with the United States.

The U.S.-Philippines relationship appears to be on sturdier ground now that President Donald Trump is in the White House.

Trump, who was also at this week's ASEAN summit, said he and Duterte "had a great relationship."

She did not say whether Trump was critical of Duterte's program.