Recreational drones were hot-ticket gifts over the holidays in 2015, with an estimated one million ending up under Christmas trees across North America — but the Wild West era of little regulation will end soon, says Transport Canada. 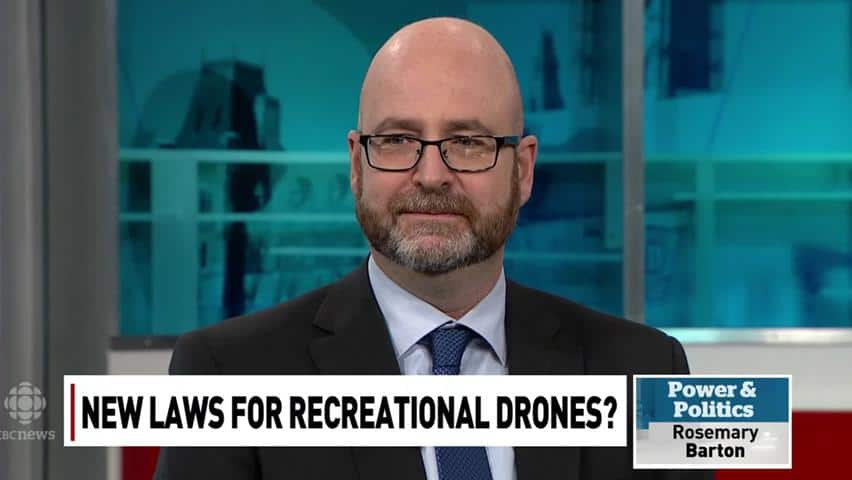 The Rise of the Drone

Recreational drones were hot-ticket gifts over the holidays in 2015, with an estimated one million ending up under Christmas trees across North America — but the Wild West era of little regulation will end soon, says Transport Canada.

"This is a whole new dynamic world, and new people, new entrants into this industry are just not familiar with the aviation safety requirements," said Aaron McCrorie, director of civil aviation at Transport Canada, in an interview on CBC News Network's Power & Politics.

"We want to make sure that we encourage aviation, and this is a neat new sector," he said. "We don't want to unduly clamp down on that, but take a balanced approach."

As recreational drones become more popular — and more sophisticated and potentially dangerous — Canadian officials are working on new rules to govern the use of unmanned aircraft.

Transport Canada's current guidelines say drones should be flown at least nine kilometres away from airports, no higher than 90 metres above the ground and at least 150 metres away from people, buildings and vehicles.

But those suggestions can be tough to enforce. Last week, a recreational drone crashed into a car in Belleville, Ont., causing $1,000 in damage to the vehicle. No one was injured.

McCrorie said that incident is just one reason to raise awareness about drone safety and upcoming new regulations.

Canada's laws haven't kept up with the "tremendous growth" in the popularity of recreational drones, resulting in "dated" laws and guidelines that need to be strengthened, he added.

In May and June, Transport Canada asked the public for feedback on how to regulate drones and is now sorting through the comments before creating recommendations to be presented to Transport Minister Marc Garneau.

Canada looks to U.S. for ideas on recreational drone laws

Transport Canada is also looking to the United States as a possible model for new laws. The Federal Aviation Administration recently required drone owners to register their devices or risk a $27,500 US fine.

"We're certainly looking at registering certain categories [of drones], depending on the level of risk, and we're also looking at having markings on the models out there as well, so we can take law enforcement action if we need to," McCrorie said.

Currently Transport Canada can issue fines of up to $25,000 for improper use of a recreational drone, depending on the circumstances, such as whether a drone user is "wilfully violating airspace" or posing a threat to an aircraft trying to land, he said.

"First and foremost, we really do want to educate," he said. "The biggest challenge we face right now is ignorance. We want Canadians to have fun, but to do it safely."