The United States, the world's second-largest emitter, might walk away from the Paris climate deal. Regardless, it seems unlikely the Trump administration will be taking significant action to reduce greenhouse gas emissions. And that raises questions for every other nation on Earth.

'No one government can stop the momentum,' says Catherine McKenna

It might not be the end of the world if the United States withdraws from the Paris climate agreement. At least not yet.

"I'm not going to speculate on a decision that's for the U.S. administration to make," Environment Minister Catherine McKenna demurred Wednesday, when asked about a spate of reports suggesting President Donald Trump was ready to pull out of the international accord.

It is no doubt wise to avoid speculating about what this president might be thinking from one moment to the next. Indeed, reports of Trump's withdrawal were also contradicted on Wednesday morning.

I will be announcing my decision on Paris Accord, Thursday at 3:00 P.M. The White House Rose Garden. MAKE AMERICA GREAT AGAIN!

But the United States, the world's second-largest emitter, might still walk away from Paris.

Regardless, it seems unlikely that the Trump administration will be taking significant action to reduce greenhouse gas emissions. It has already begun moving to unravel other environmental regulations put in place by the previous Obama administration.

And that raises questions for every other nation on Earth.

What McKenna tells her American counterpart

Here in Canada, Trump's decision might prompt renewed calls from federal Conservatives or Saskatchewan Premier Brad Wall to abandon plans for a national price on carbon.

But concerns that Canadian firms could be disadvantaged are not new and could be addressed within an energy plan. And Canadian critics might want to be careful about aligning themselves with an unpopular president.

McKenna's argument for acting on climate is both economic and moral: there is both an opportunity in the move to clean technology and an "obligation to our children and grandchildren" to mind the welfare of the planet.

To her American counterpart, she also makes a practical argument.

"I've had many conversations with my U.S. counterpart to make the economic case; also to make the case that 90 per cent of the Paris agreement remains to be negotiated and it's better to be at the table," she said, referring to Scott Pruitt, the new head of the Environmental Protection Agency and a Republican politician who questions whether humans are causing global warming.

"We certainly will be at the table, playing a leadership role," added McKenna. "Because we think it's the right thing to do and it makes economic sense."

The prime minister is said to have spoken with the president about the Paris accord, and the United States could conceivably remain in the agreement while refusing to do much of anything. The deal is not legally binding.

There are those who wonder whether it would be better if the United States wasn't at the table: a hostile American government might only make it harder to make progress — something recently hypothesized by former Canadian official Silvia Maciunas.

But opposite that is the possibility that an exit by the U.S. could cause other countries to leave, or simply reduce their ambitions altogether. (At the moment, only Syria and Nicaragua are on the outside.)

That is perhaps the worst case scenario. But it is not necessarily inevitable.

It is also possible that the rest of the world is willing to move on.

"I think the world is really coming together," McKenna said Wednesday. "No one government can stop the momentum."

This is the optimistic view.

While Trump's administration might not want to act, governments in California and New York are still committed to reducing emissions.

Last week, McKenna was in Berlin to meet with the European Union's environment commissioner and China's special envoy to discuss climate policy. A further ministerial meeting is scheduled for September.

Crucially, it seems that China — the world's largest source of emissions — could position itself as a global leader on climate. But in the absence of the U.S., the world might also have to contend with an accompanying shift in influence.

Chinese leaders are facing domestic concerns about air quality and could see both political and economic advantages to reducing emissions and investing in clean energy. The EU and China are also now reportedly preparing a joint declaration of their shared commitment to fighting climate change.

Meanwhile, clean energy technology is getting more affordable. And the market, McKenna argues regularly, is deciding to move in that direction.

"It's not a good day if the U.S. withdraws from the Paris agreement; it's not a good day for climate action ... It's better that they're in and taking action than being out, because overall we need more ambition from everyone," says Laurence Blandford, a former Canadian official now with the Washington-based Center for Clean Air Policy.

"However, there are significant players who are likely to take up the mantle of leadership, notably the Chinese. And there are technological trends that suggest one could at least be optimistic that increasingly climate friendly options will become the more affordable ones and will more likely be chosen in the market."

Paris is really only a 1st step

Of course, a new president could also be in office by 2021.

In the meantime, the loss of billions in American contributions to assist developing nations with adaptation and mitigation would conceivably have to be covered by other parties. The U.S. might become an international pariah.

And it is no small fact that the reductions so far committed to in the Paris agreement are not yet sufficient to limit future global warming to 2 C, the threshold climate scientists suggest the world should avoid crossing. 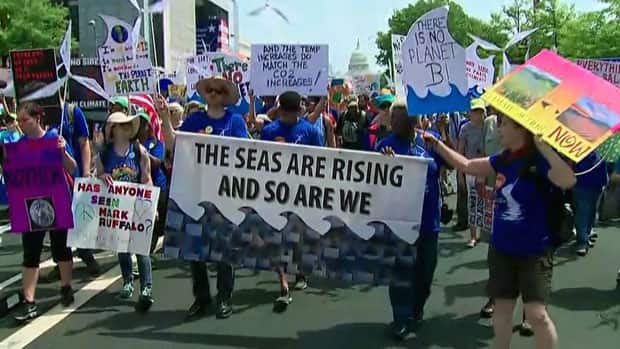 4 years agoVideo
2:12
Marches held in cities around the world Saturday to urge governments to act on climate change 2:12

Any amount of inaction makes that math more difficult.

The challenges of collective action and accepting immediate sacrifices for future benefit would remain. The central issue would still be an existential threat to the human species.

"Canada's just going to keep marching on," McKenna said Wednesday. "Like the rest of the world."

Perhaps, then, Trump's contribution to the cause could be galvanizing everyone else.