Trudeau stays polite as Trump rages against NATO and NAFTA

Up to now, Canadian officials have tried to stay out of the U.S. election, even as Donald Trump denounces NAFTA. But now, Trump is going after NATO, too. Is it time to stop being diplomatic?

The Liberals have tried to avoid being blunt about Trump. That's getting harder.

As it is, Trump has merely attacked two bedrock international institutions that anchor Canada's place in the world: NATO and NAFTA. So naturally, we're being polite.

After all, it's Mexicans who Trump labelled "rapists" — not us.

But you have to wonder how long we're required to be diplomatic — especially after The Donald's stunning new interview with the New York Times, in which he casts doubt on the U.S. commitment to NATO and threatens to rip up NAFTA "in a split second."

Let's not be rude

To date, Prime Minister Justin Trudeau has ducked repeated invitations to take a shot at Trump — instead vowing to stay out of a foreign election and stressing that Canada's ties with the U.S. do not depend on individuals.

In normal times, that's by-the-book diplomacy — and, if Trump gets elected, maybe he won't lash out at his soft-spoken neighbours. Maybe.

But that doesn't seem like a safe bet. To date, Trump has not been especially fastidious about his targets and his attacks on a central component of Canada's trading economy — NAFTA — have been standard fare for months.

Still, Canada turns the other cheek. The closest Trudeau has come to picking a side came in a Bloomberg interview on March 8: "I'm not going to pick a fight with Donald Trump right now. I'm not going to support him either, obviously."

Obviously? That was when Trump's rise wasn't so certain. As his ascent became inexorable, though, the Trudeau government has been reluctant to offend. The standard reply is, "We look forward to a productive working relationship with whoever is elected as the next president of the United States of America."

But how productive could that possibly be if a President Donald Trump is elected? And, with its security bound to NATO and its economy bound to NAFTA, can Canada remain silent about a candidate who thinks so little of both?

Trump's trashing of NATO's fundamental purpose emerged when he was asked by David Sanger of the New York Times whether he'd come to the aid of Estonia, Latvia or Lithuania if the Russians came over the border.

NATO doctrine says that this is exactly backwards. For 67 years, Canada and its NATO partners have insisted that the Russians must know for certain what we'd do: we'd treat an attack on one as an attack on all. What's the point of a deterrent if your enemy doesn't think you'll use it? As Sanger pointed out to Trump, the Baltic states "are NATO members, and we are treaty-obligated."

Trump objected that "we have many NATO members that aren't paying their bills." Again, Sanger reminded him that "we are treaty-obligated under NATO, forget the bills part."

Trump's response: "You can't forget the bills. They have an obligation to make payments. Many NATO nations are not making payments, are not making what they're supposed to make. That's a big thing. You can't say forget that."

But there's something Trump did forget — if he ever knew it. As Estonian President Toomas Ilves quickly responded on Twitter, his country is fully paid-up. It spends the full two per cent of GDP that NATO expects. (Canada spends only one per cent of GDP.)

Estonia is 1 of 5 NATO allies in Europe to meet its 2% def expenditures commitment. Fought, with no caveats, in NATO's sole Art 5 op. in Afg

Ilves added dryly that "we are equally committed to all our NATO allies, regardless of who they may be. That's what makes them allies."

Canada's response was less cutting but edged cautiously towards the same point. Defence Minister Harjit Sajjan didn't attack Trump personally, but told The Canadian Press that the promise that NATO members would automatically come to each other's defence is central to the alliance.

"Giving aid and comfort to the enemy may best describe what Trump's positions are when it comes to NATO and Putin," Saideman wrote. In a phone interview with CBC News, he added, "I'm confused as to whether he's deliberately ignorant or just lazy."

Asked why he didn't just say what he really thinks, Saideman replied, "I think he's an idiot."

'NAFTA is a disaster'

We will not soon see Justin Trudeau be so blunt. But, for a middle power like Canada — a founding father of NATO — security without the alliance is hard to imagine. Trump's frequent musings about defaulting on the U.S. national debt seem just as ruinous, if not more so.

And NAFTA? He wouldn't mind wrecking that, too.

As Trump said June 28 in Monessen, Pa., "I'm going tell our NAFTA partners that I intend to immediately renegotiate the terms of that agreement to get a better deal for our workers. And I don't mean just a little bit better, I mean a lot better."

Some disaster. In its first 20 years, trade among the three NAFTA partners nearly quadrupled. The countries' combined gross domestic product more than doubled, from $8 trillion US in 1993 to $20 trillion in 2014.

There's nothing impolite about pointing that out. But politeness, apparently, is not the only possible response.

The Mexicans have a different approach. Very different. President Enrique Pena Nieto went all the way in the other direction — standing with Trudeau and U.S. President Barack Obama in Ottawa at the end of June and comparing Trump's rhetoric to Hitler's.

"In the past, some leaders addressed their societies in those terms. Hitler and Mussolini did that and the outcome, it's clear to everyone, it resulted in devastation. It turned out to be a tragedy for mankind and we saw that last century."

Perhaps Pena Nieto is gambling that Trump will lose. Or perhaps he just thinks it's too late for politeness. 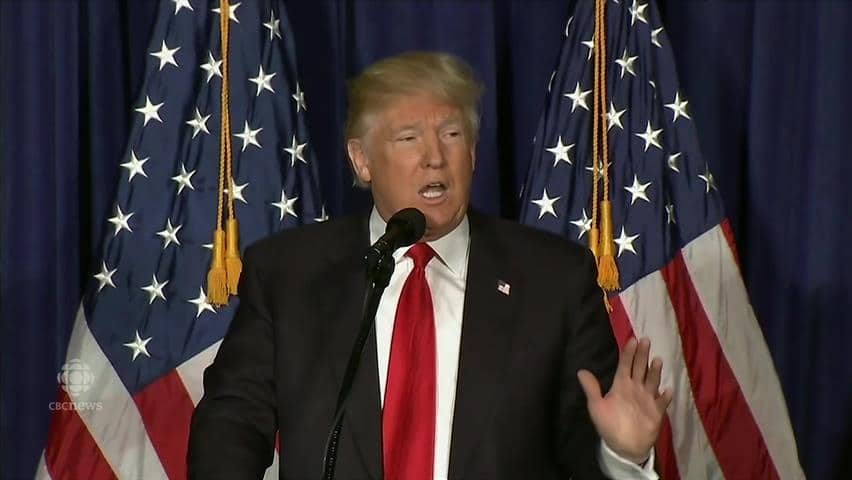 5 years agoVideo
0:48
Republican presidential frontrunner says U.S. can't foot the bill for other NATO allies, calls on them to boost to defence spending. 0:48