U.S. president reported to have disparaged Haitians and African countries

"Today, January 12, marks the commemoration of the earthquake that devastated Haiti eight years ago," Jean said in a statement, "and it was so disturbing this morning to hear President Trump's comments reported all over the news calling my poor native land and African countries 'shithole' nations.

"It is such an insult before humanity. For the First Representative of the United States of America to speak in such a manner is quite troubling and offensive."

The U.S. president is reported to have referred to "shithole countries" in Africa, questioned why the United States would take more people from Haiti, and expressed a preference for people from Norway while he was meeting with lawmakers in the White House on Thursday.

After an initial series of reports were published on Thursday night, a subsequent report on Friday morning suggested that Trump might not have described Haiti as a "shithole."

Jean was born in Haiti and came to Canada as a child. She was governor general in 2010 when Haiti was hit by a massive earthquake that devastated large portions of the country, killing tens of thousands of people and displacing many more.

Jean visited the country shortly after the quake and, after her term as governor general ended, she was named UNESCO's special envoy to Haiti. She is also currently secretary general for La Francophonie, a coalition of 58 French-speaking countries, including several African nations.

Asked on Friday about the comments attributed to Trump, Prime Minister Justin Trudeau acknowledged the anniversary of the earthquake in Haiti, but declined to directly address the words in question.

"I think that I will take this opportunity not just as prime minister but as the proud MP for Papineau, which has a strong and vibrant Haitian community, to highlight that today is the eighth anniversary of a terrible earthquake that caused devastation not just on the Island but across the diaspora in North America," Trudeau said in London, Ont., where the federal cabinet was meeting.

"And the response of the Haitian diaspora, the response of Canadians to that terrible tragedy is one that we can all be proud of. This remains the way Canada engages with countries around the world.

"I think you all know that I am not going to opine on what the president may or may not have said. I will simply repeat that Canada is a country of openness of respect and we will continue to be there to support friends around the world and to welcome people who will contribute to building a stronger country."

Liberal MP Celina Caesar-Chavannes, a parliamentary secretary to the minister of international development, did respond to reports of Trump's comments on Thursday evening. 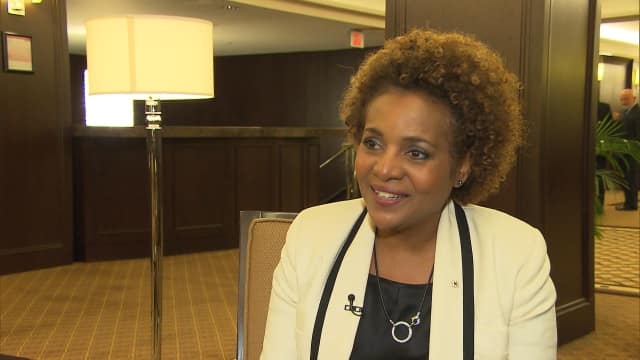