Some of Senator Don Meredith’s Senate colleagues are less than comfortable that he continues to sit in the upper chamber with the cloud of two investigations hanging over his head. 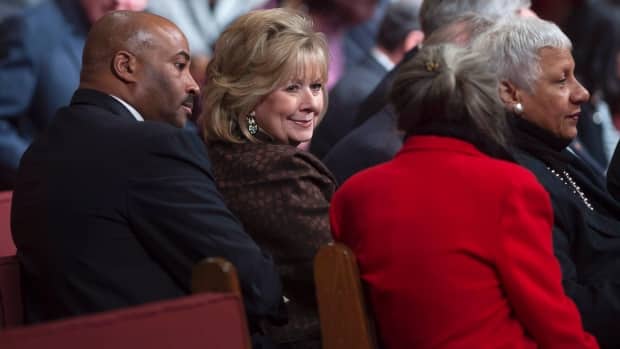 5 years agoVideo
0:41
Some senators say they're uncomfortable with Meredith sitting while investigations continue, but say their hands are tied. 0:41

Some of Senator Don Meredith's colleagues in the upper chamber are unhappy that he continues to sit in the Senate with the cloud of two investigations hanging over his head.

Meredith faces a police investigation over allegations of sexual misconduct involving a teenaged girl. And the Senate ethics officer continues to look into allegations of workplace harassment.

It was nearly six months ago that Meredith was kicked out of the Conservative caucus after a newspaper reported an 18-year-old woman was alleging he had an inappropriate sexual relationship with her that started when she was 16.

No charges have been laid but police continue to investigate.

Last week Meredith was in the Senate for the investiture of a new Speaker and again the next day for the throne speech, approaching fellow senators and shaking hands. That didn't sit well with some senators.

While most were reluctant to make their concerns known on the record, Conservative Senator Vern White didn't mince words.

"If he is still under investigation for sexual assault — criminally — he should not be sitting in the Senate," said White, a former chief of police in Ottawa.

Others say there is no basis to oust him.

"He hasn't been charged and you know until that happens, I don't think there is a basis to suspend him," said Liberal Senator David Smith.

In February, the Senate Speaker launched a workplace assessment after hearing rumours of harassment and bullying that involved at least four employees.

An outside firm was brought in to investigate, and that firm's report was handed over to the Senate ethics office on July 15. Nearly six months later, the office has yet to issue a report.

"The SEO cannot be specific with timelines concerning any given case. It would depend on the facts of a particular case, its complexity, and the time that is required in order to properly canvass and dispose of the relevant issues," the office said in a statement to CBC News.

When asked Thursday whether they were comfortable with Meredith remaining in the Senate, several senators said they felt their hands were tied.

"Comfortable? Probably not comfortable, you know, but the reality is he hasn't been charged with anything," said Conservative Bob Runciman.

"That's a difficult question and it's one I really don't want to talk about," said Conservative Carolyn Stewart Olsen.

"This is not my business. See what happens," said independent Senator Jacques Demers.

On Friday, Conservative Senator Linda Frum tweeted her thoughts. "In a bygone era, he would step aside until cleared."

Meredith's office did not return calls or emails from CBC News seeking comment.