Senator Don Meredith appeared before the Senate's ethics committee for the first time Tuesday to make the case as to why he should stay on as a member of the Red Chamber after having sexual relations with a teenage girl.

Committee chair says 'everything is under consideration,' including outright expulsion from Red Chamber

Senator Don Meredith appeared before the Senate's ethics committee for the first time Tuesday to make the case for why he should stay on as a member of the Red Chamber after having sexual relations with a teenage girl.

Members of the committee must now decide on an appropriate sanction for Meredith after the Senate ethics officer found him in violation of two sections of Red Chamber's code of conduct, namely that he has brought the Senate into disrepute as a result of his behaviour.

The Conservative chair of the committee, Senator Raynell Andreychuk, said after the meeting: "Everything is under consideration."

That would include an outright expulsion, something that has never been done before in Canadian history.

Senate administration went to unprecedented lengths Tuesday to shield Meredith from the media, removing reporters from the entrance closest to the elevators used by senators to access the committee room.

The Parliamentary Protective Service said it received "special instructions" to forbid any member of the media from standing near the door or in its vicinity, escorting reporters to an alternative entrance and parking them behind a velvet rope. Meredith later slipped into the room unnoticed.

Later, a man presenting himself as a Senate staffer, told CBC News Meredith would make himself available for a scrum with the media, but then stood in the way as Meredith and his lawyer dashed up a nearby staircase to his fourth floor office, avoiding television cameras.

In a highly unusual move, the PPS also placed one of its officers outside of the senator's office.

According to long-standing rules agreed to by both the Parliamentary Press Gallery and House of Commons and Senate administration, filming and the presence of reporters is explicitly allowed in these areas.

The meeting itself was held "in camera," or in private, and media were not permitted in the room as the committee met with Meredith.

Meredith's lawyer, William Trudell, said his client would not speak to the media. When asked if there is a public right to know about the outcome of his client's meeting with the committee, Trudell said it seemed as if the media had already made up its collective mind as to the guilt or innocence of his client.

Meredith, who is still being paid, will not be making any further statements, Trudell said, out of respect for the committee's process.

Trudell said he hoped the committee would give his client the opportunity to appear again. Meredith, a Pentecostal pastor, has said while his relationship with a teenager was a "moral failing," he does not believe he should be forced to resign from the Senate.

Trudell said his client went out of his way to be in Ottawa in person Tuesday, as he has been on sick leave since the ethics officer, Lyse Ricard, first released her report last month. He refused to say what sort of illness the senator is battling, but noted he took breaks during the almost three-hour long meeting.

Independent Senator Andre Pratte, who is not a member of the committee, told reporters Meredith should be expelled from the Senate because his actions don't befit the office of senator.

Senator Anne Cools, also an independent, said Meredith's actions are a private matter and the Senate shouldn't be policing the personal lives of its members, or considering expulsion, because that is a "slippery slope." 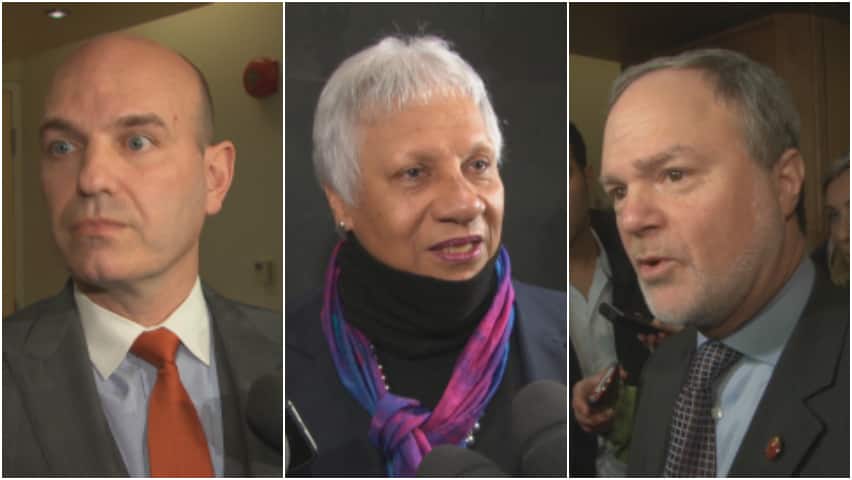 4 years ago
2:34
Sen. Don Meredith's appearance at the Senate Ethics Committee sees him getting support from Sen. Anne Cools, while Sen. Andre Pratte and NDP MP Nathan Cullen want to see him removed from the Senate. 2:34