Canada's ambassador to China, Dominic Barton, appeared before the Special Committee on Canada-China Relations Wednesday evening to talk about all aspects of Canada's relationship with China.

Canada's Ambassador to China Dominic Barton appeared before the Special Committee on Canada-China Relations Wednesday evening to talk about all aspects of Canada's relationship with China.

During the two-hour exchange between Barton and the MPs on the committee, Canadians learned a bit more about the ambassador's mandate in China, the resilience of two Canadians being held there, his knowledge of Canada's China policies, the treatment of the Muslim minority Uighurs and how our relationship with Beijing has evolved over the last two years.

In December 2018, Canada detained Huawei Technologies chief financial officer Meng Wanzhou at the Vancouver International Airport on an extradition request from the United States. She was later granted bail and is now awaiting a decision on her extradition.

Convicted of playing a central role in a methamphetamine smuggling operation, Canadian Robert Schellenberg was sentenced to 15 years in prison in November of 2018. That prison term was changed to a death sentence at a hastily scheduled January 2019 retrial.

Barton said that despite the challenges facing these three Canadians, he has been "inspired" by how they are holding up.

"I've seen each of them a number of times," said Barton. "I am unbelievably inspired by their resilience. Each of these three people, it's incredible, as humans and individuals."

Barton said it's unusual for ambassadors to frequently visit Canadians under detention in China but that he has committed to visiting these men "every single time" he's permitted. 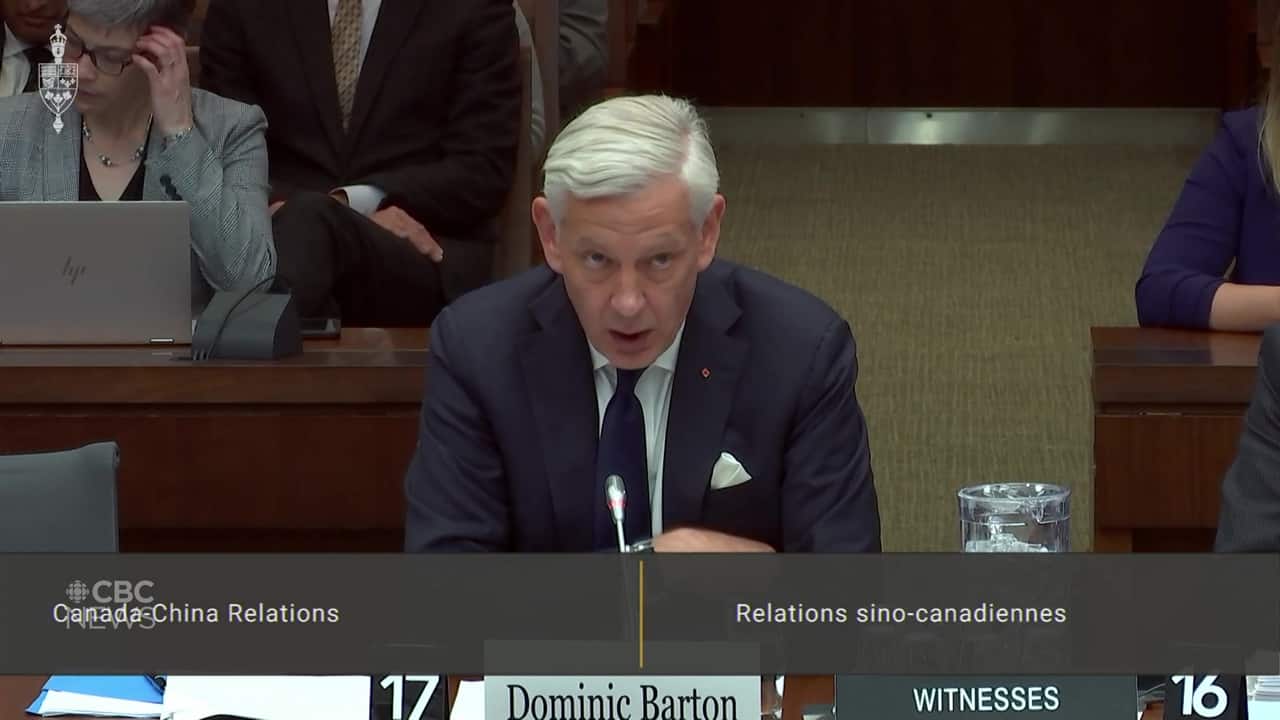 1 year ago
0:39
Canada's ambassador to China says he is inspired by the strength of Michael Kovrig, Michael Spavor and Robert Schellenberg. 0:39

The ambassador said that he was given a mandate that included an overall objective of restoring relations between Canada and China. That mandate comes, Barton said, with one caveat and three key priorities.

"First and foremost, secure the release of Michael Kovrig and Michael Spavor and get clemency for Robert Schellenberg. That is core. That's a priority. Second, promote and protect human rights," said Barton.

Barton's third priority is to deepen person-to-person relationships between Chinese and Canadian people. This should take place, Barton said, at all levels, including government, the arts, business and universities.

The caveat, he said, is that those efforts must be made in keeping with "international rules and principles that provide predictability and security." 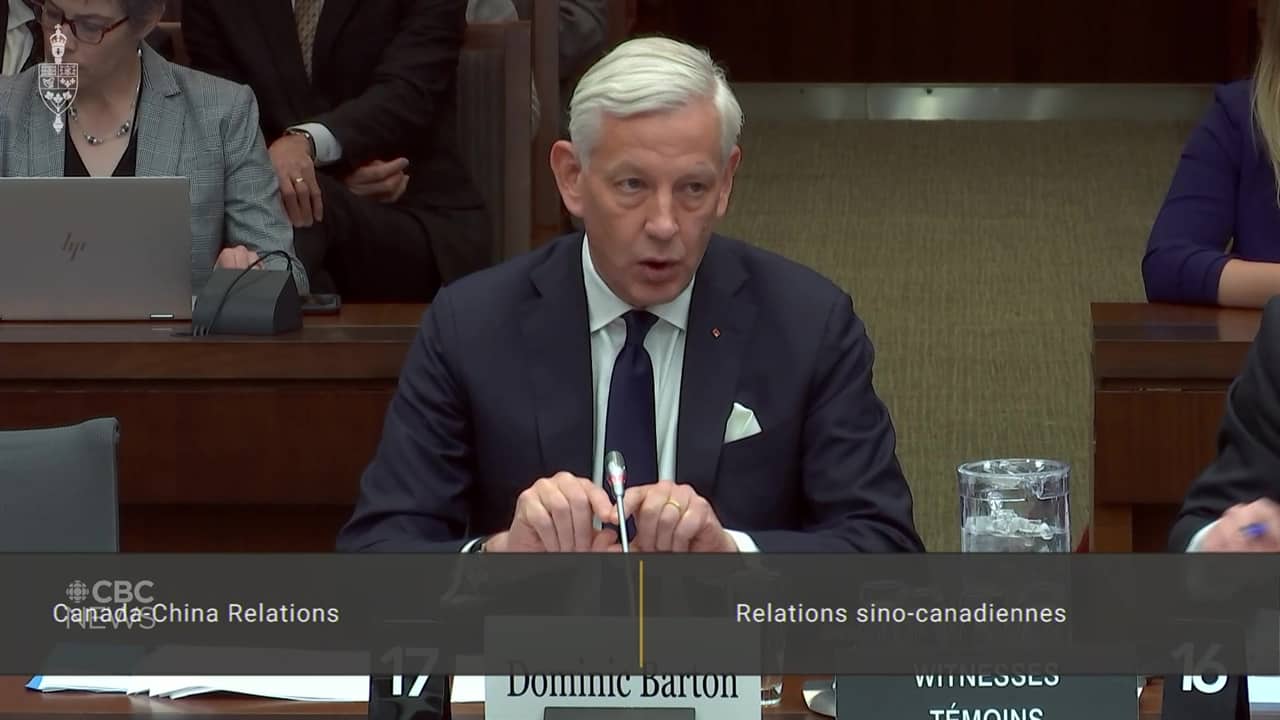 1 year ago
1:30
Canada's ambassador to China says his main job in China is to restore relations and he has been given three priorities to ensure he keeps in mind while he engages in that effort. 1:30

3. The chill between Canada and China is 'real'

Barton said that in the days after Canada arrested Meng and China in turn detained Spavor and Kovrig, there was virtually no dialogue between Canadian and Chinese officials. It was all anger and resentment.

"We're angry. We're very angry because of our people that had been taken. China is very angry as well, furious. We're both furious," Barton said.

"The first conversation I had there was probably one of the most unpleasant conversations I've ever had. I mean, the shaking and anger from there, and we were also … It wasn't a conversation." 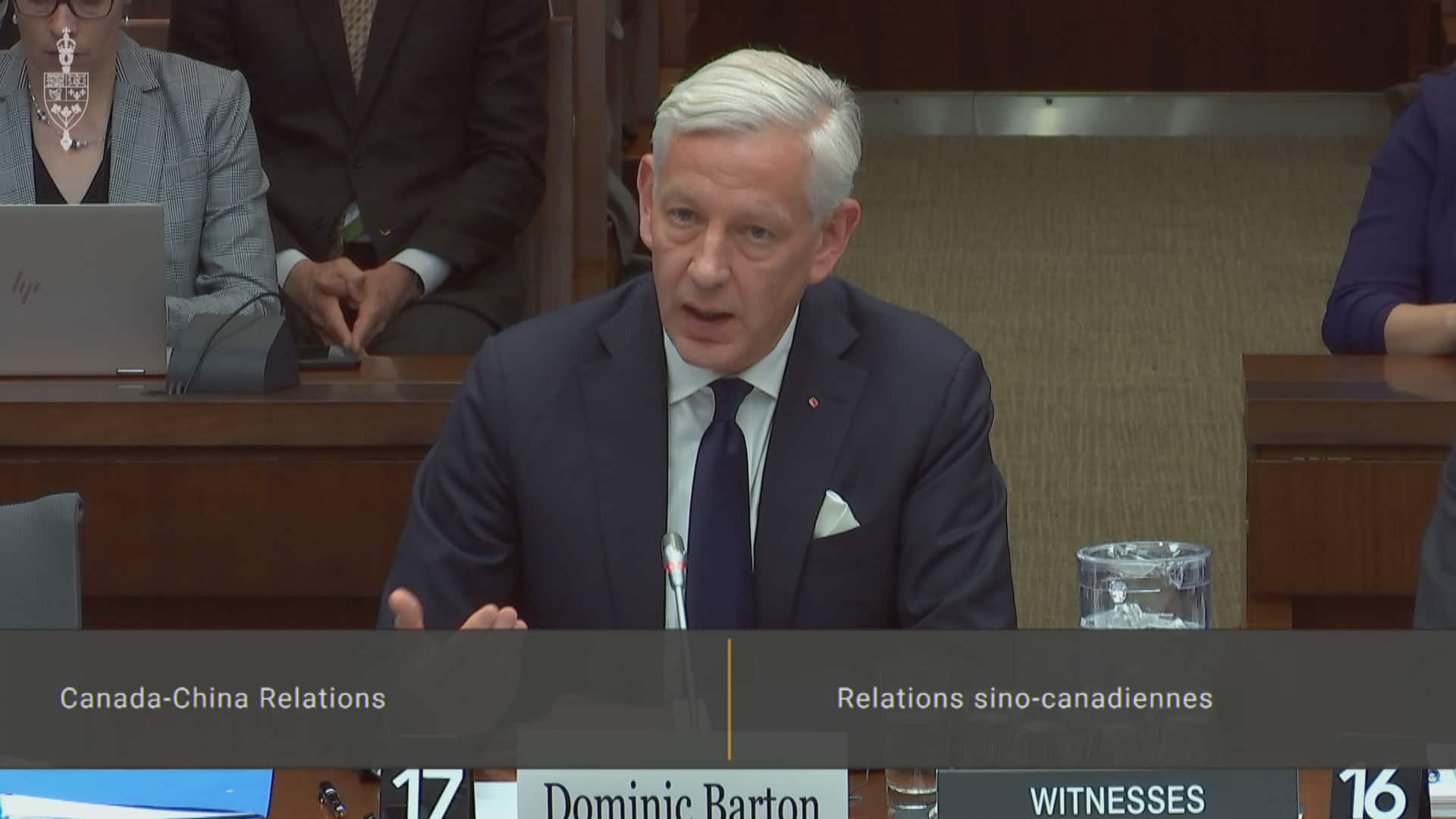 1 year ago
0:37
Canada's Ambassador to China Dominic Barton said his first conversation with Chinese officials was "probably one of the most unpleasant conversations" he's ever had. 0:37

Barton said that since that low point, Canadian and Chinese officials have been talking to one another and are now able to have critical debates about issues they agree on and don't agree on.

"We're never going to be singing from the same hymn book," said Barton. "We did not have any formal communications, it was a lot of informal, we now have very good formal relations. We have real discussions where we can argue and debate."

4. Canada has leverage over China

Barton said that part of his mandate with China is to not allow Canada to be bullied. The ambassador cited that as a reason for Canada's refusal to consider a prisoner swap of Kovrig and Spavor for Meng.

He said that despite trade disputes over Canadian meat and canola exports that made it seem as though China has a more powerful bargaining position, Canada actually does have some leverage despite its smaller economic clout.

"We're saying you need to be careful on the Chinese side because we are a high quality, safe food supplier," said Barton.

The ambassador added that Canadian producers of pork and beef — producers that China relies on to feed a very large population — may decide to try and find other more stable markets in Asia and beyond if China continues to use trade as leverage in the Meng dispute.

It is a message, Barton said, that has been delivered to the Chinese regime. 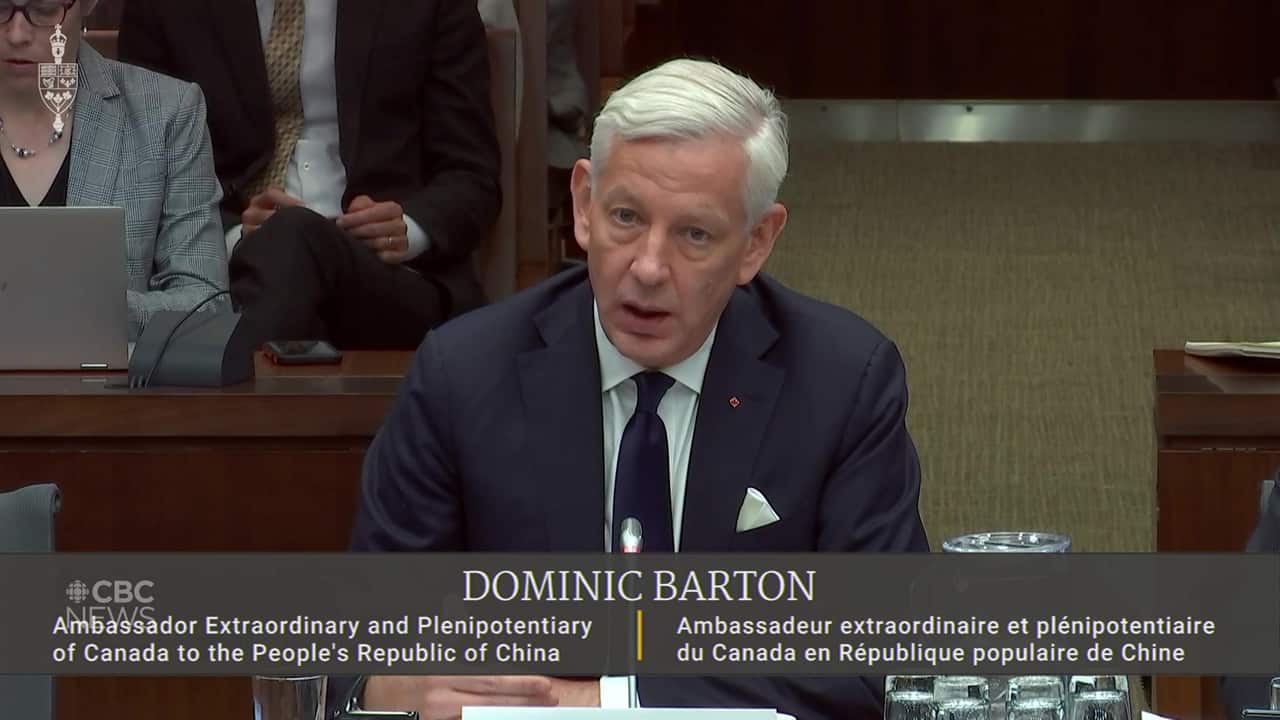 1 year ago
1:05
Canada's ambassador to China says Canada is a reliable and much needed food source for China's population that Canada can use as leverage over the regime. 1:05

5. The two files on which Barton appeared not fully briefed

On at least two occasions during the hearing, Barton seemed to struggle with the details of some major files and policies at play between Canada and China — such as Canada's official position on China's construction of islands in the South China Sea.

Conservative MP Garnett Genuis asked Barton about some of the business dealings the firm he used to run — McKinsey & Company — had with Chinese state-owned companies.

Genuis said one of those companies, the China Communications Construction Company, was involved in building artificial islands in the South China Sea, which is illegal under international law. Barton appeared to be unaware that Canada also views the islands as illegal.

"I would follow the policy of what the government does. I think the Canadian government respects international opinions but we don't have a view on maritime issues so I'd have to look at what our policy is on that," he said. 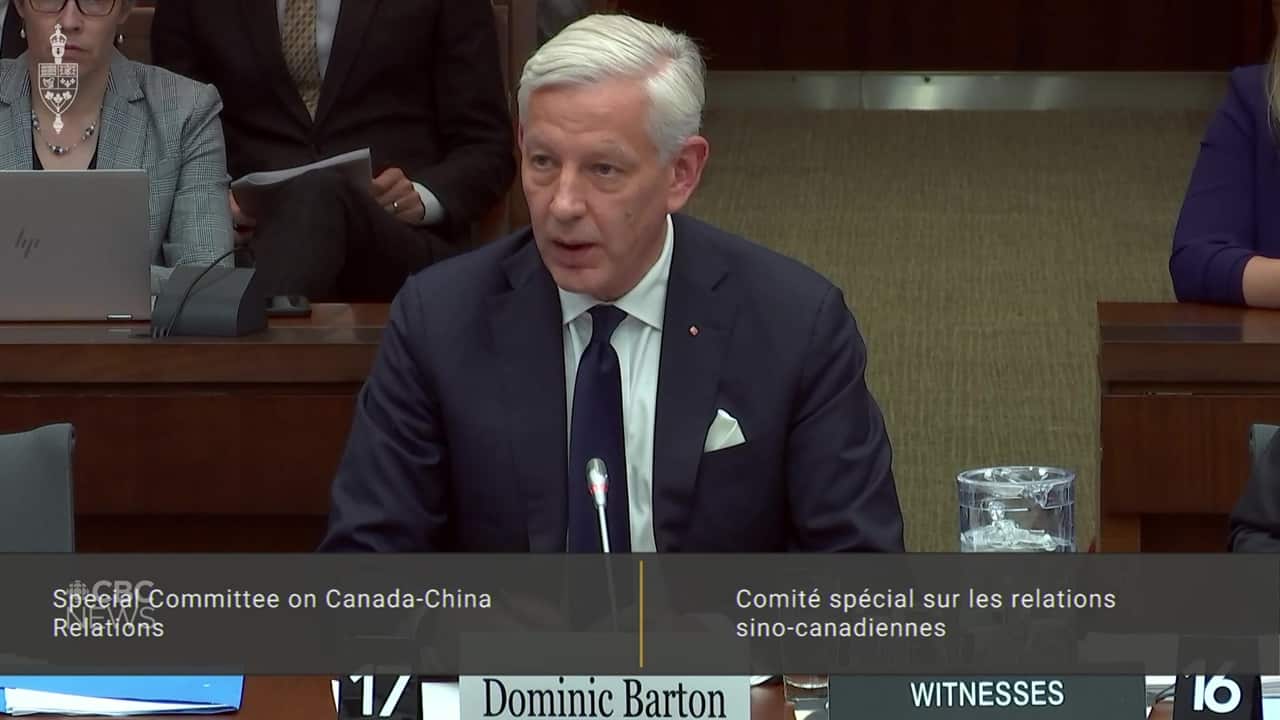 Dominic Barton on China's actions in the South China Sea.

1 year ago
1:30
Canada's ambassador to China appeared to stumble when it came to knowing Canada's policy of opposing China's construction of islands in the South China Sea. 1:30

Asked about his involvement in the case of Huseyin Celil — a dual Canadian and Chinese citizen and member of the Uighur Muslim minority who has been held by the Chinese regime since 2006 — Barton stated that he has been unable to visit Celil in prison because he was not a Canadian citizen.

Genuis contradicted Barton, informing the ambassador that Celil is in fact Canadian. China does not recognize dual citizenship.

Beijing has faced international criticism over its treatment of the Muslim minority in Xinjiang province.

Celil spoke out against the Chinese policy of suppressing the Uighur minority's religious freedom and swiftly fell afoul of the regime, which has been rounding up Uighurs by the hundreds of thousands and interning them in concentration camp-style re-education facilities. 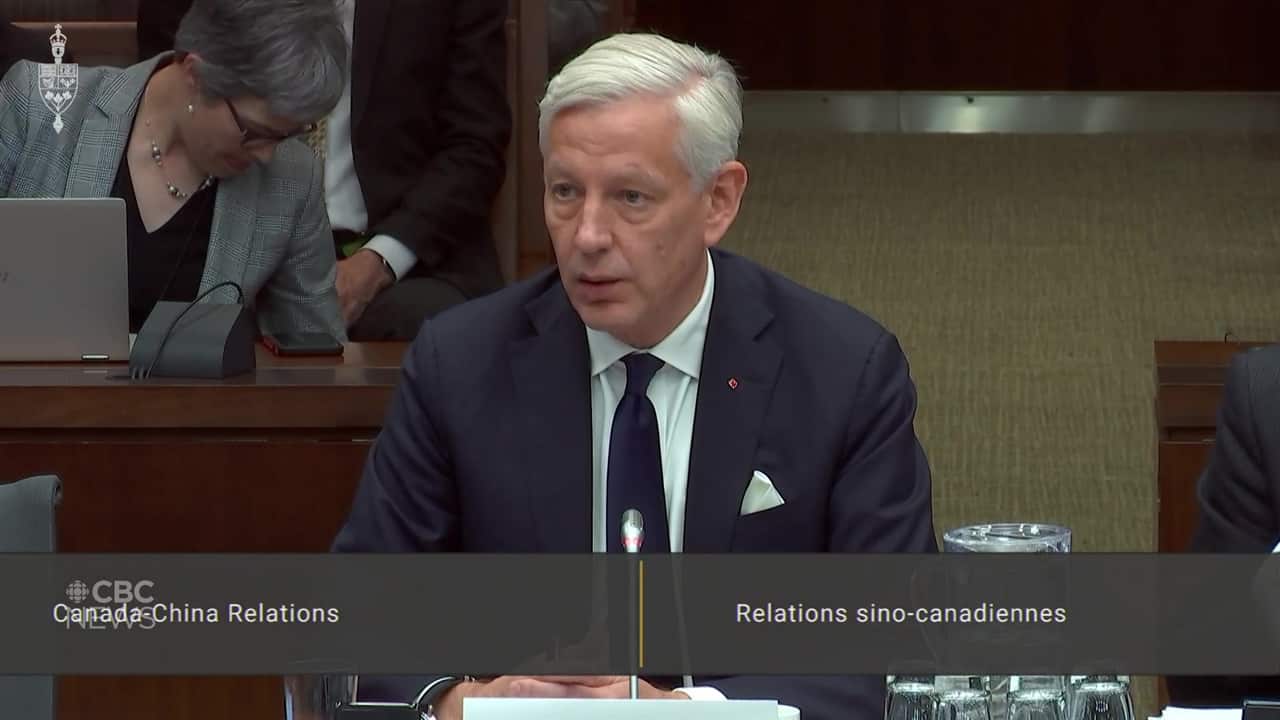 1 year ago
0:49
Canada's ambassador to China on Huseyin Celil, a dual Canadian/Chinese citizen from China's Uighur minority that has been held by the Chinese regime since 2006. 0:49

He escaped from China in 1994 and fled to Turkey, where he was granted refugee status by the United Nations High Commission for Refugees. He became a Canadian citizen in 2001, when he moved to Ontario and settled in the Hamilton area.

In 2006, while visiting his wife's family in Uzbekistan, Celil was detained by Uzbek police and deported to China without the consent of the Canadian government.

Barton also was asked about a meeting in China organized by the firm he used to run, McKinsey & Company. The retreat was held in Kashgar, China, in 2018, just four miles from where Uighurs were being held in camps.

The ambassador said that "McKinsey apologized for that having been done" and that, as far as he knew, the company did not know Uighurs were being kept in camps so close to their meeting site.

Genuis reminded Barton that the existence of the camps in that part of China had been denounced by the UN a week before the meeting, and had also been the subject of a number of media reports. 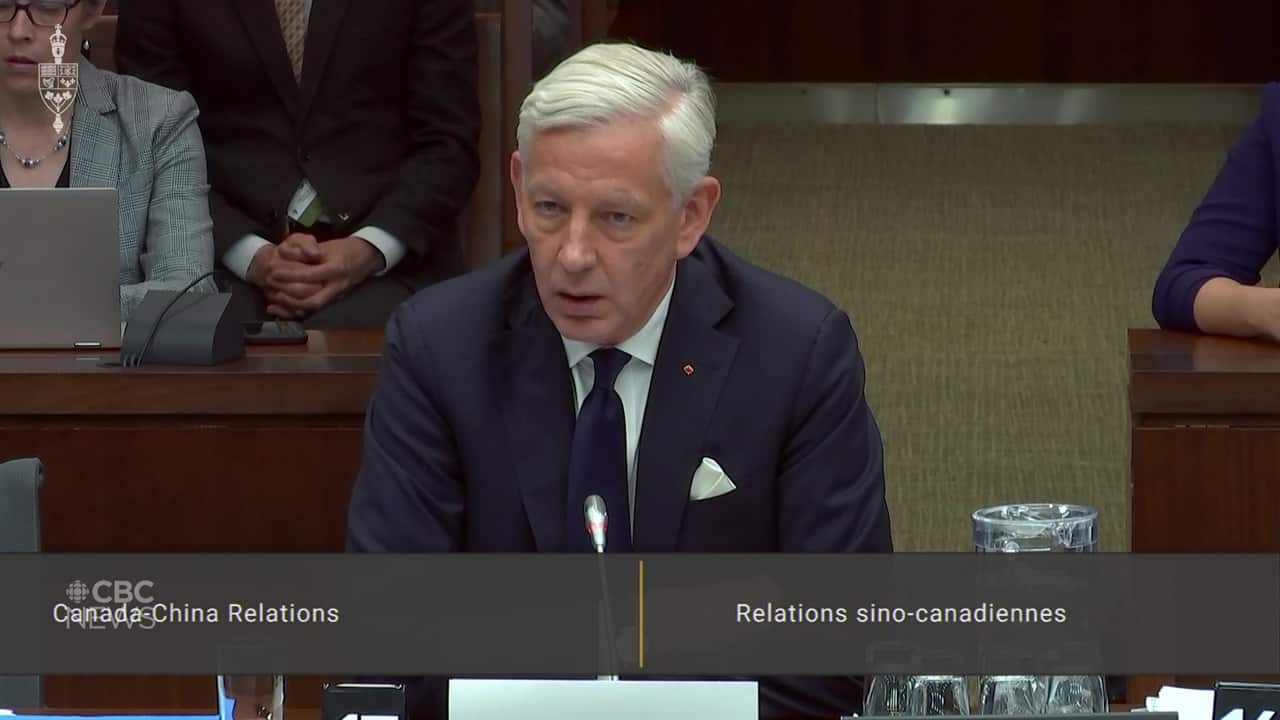 1 year ago
0:33
Canada's ambassador to China says the company he used to run, McKinsey & Company, held a meeting in 2018 in Kashgar, China, unaware that the gathering was four miles from where China was holding thousands of ethnic Uighurs in camps. 0:33

6. What Barton says about accusations his business ties pose a conflict of interest

NDP MP Jack Harris asked Barton about his history of business dealings with China and the suggestions by Democracy Watch and others that those dealings put him in a conflict of interest.

Barton said he and his wife, Geraldine Buckingham, have met with the parliamentary ethics commissioner and have followed all the advice that he has been given on how to maintain those business relationships without falling afoul of conflict of interest and ethics laws.

"From a financial point of view, I think it was (former Liberal deputy prime minister) John Manley who said, 'This is the stupidest economic decision I could ever make in my life,'" said Barton. "I did it for public service. I want to help. I feel I can help the country." 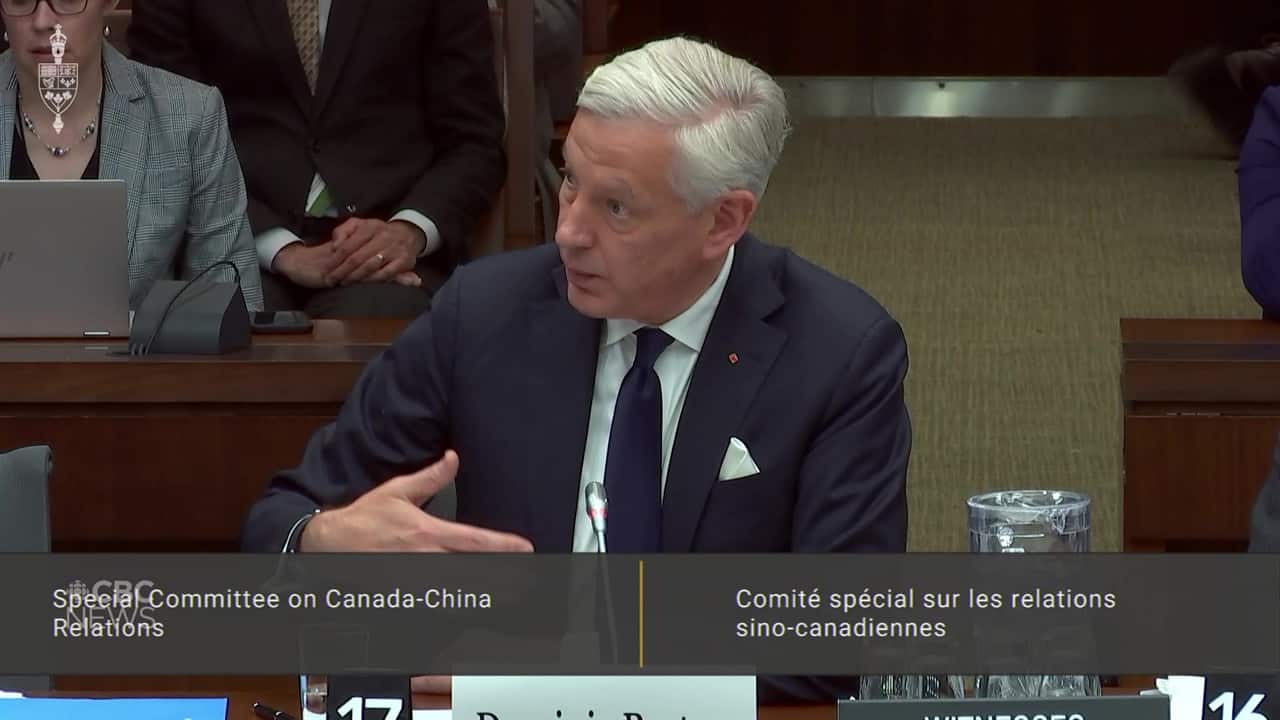 Dominic Barton on his business interests

1 year ago
2:52
Canada's ambassador to China says that taking his current position was one of the worst economic decisions he ever made but he did it because he wanted to serve Canadians. 2:52