Rain lashed down at a solemn ceremony in Ottawa today to mark the 75th anniversary of one of Canada's bloodiest battles of the Second World War.

Rain lashed down at a solemn ceremony in Ottawa today to mark the 75th anniversary of one of Canada's bloodiest battles of the Second World War.

Shielding himself with an umbrella, Prime Minister Justin Trudeau paid tribute to those who fought and died with "grit and valour" in the Dieppe raid and to the parents, siblings, spouses and children who were left heartbroken.

Trudeau said at that time, boys were forced to quickly become men — men of "tremendous bravery and fortitude, dedicated to country."

"We often learn more about ourselves in our losses than our victories. We grow, we persevere, we learn hard truths," Trudeau said. "The Dieppe raid was a devastating engagement for Canadian troops, and their loved ones back home. But, ultimately, our soldiers learned lessons that would help secure their victory two years later on the beaches of Normandy.

"For those lessons, we look back on the Dieppe raid with unshakable pride."

Veterans Affairs says the Dieppe raid, code-named Operation Jubilee, was the first significant military action involving Canadian soldiers in Europe during the Second World War. Historians have long debated the role of Dieppe, with some recalling it as a valuable trial run for subsequent coastal assaults, including D-Day.

Others see it as a massacre that resulted from a massive military strategy failure.

Then Trudeau put down his umbrella to note the weather was "fitting" for the occasion.

"As we sit here in the rain, thinking how uncomfortable we must be these minutes as our suits get wet, and our hair gets wet, and our shoes get wet, I think it's all the more fitting that we remember on that day in Dieppe the rain wasn't rain, it was bullets," he said, departing from his prepared remarks. 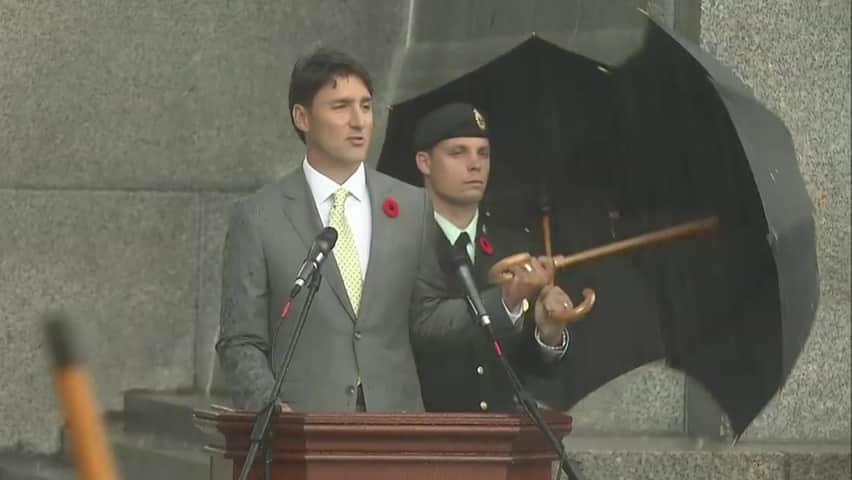 Trudeau: 'it wasn't rain it was bullets'

3 years ago
1:20
PM Justin Trudeau removes his umbrella as he commemorates the 75th anniversary of the Dieppe raid. 1:20

"As we stand here 75 years later with this duty and this act of remembrance, it is all too fitting. Today and every day, we recommit ourselves to the pursuit of peace and justice for all. Today and all days, we remember."

Many of the participants wore plastic ponchos and carried poppy umbrellas.

The ceremony included readings of the Act of Remembrance by Dieppe veterans David Lloyd Hart and Maurice Leblanc.

Veterans Affairs Minister Kent Hehr, who just returned to Canada after leading a delegation to France to mark the 75th Dieppe anniversary, was also present at the ceremony.

Veterans, representatives of Indigenous and Veterans' associations, RCMP members, Canadian youth and parliamentarians were all part of the delegation, which included four veterans who took part in the Dieppe raid.

In a news release, Hehr called it a "truly humbling experience" and stressed the importance of learning their stories to ensure their legacy is never forgotten. 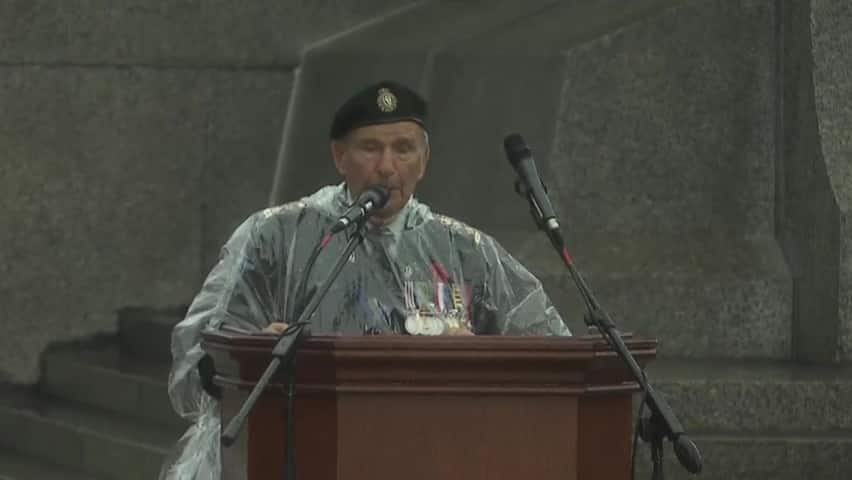 3 years ago
2:35
David Lloyd Hart delivers the Act of Remembrance during a ceremony in Ottawa commemorating the 75th anniversary of the Dieppe raid. 2:35
CBC's Journalistic Standards and Practices|About CBC News