New Conservative leader Erin O'Toole's recent talk of balancing the federal budget over "a decade or two" shows just how far the political conversation in Canada has shifted away from an overwhelming focus on deficits.

With both major parties banking on a decade of red ink, we can talk about the 'what' more than the 'how much'

Various observers and unnamed officials spent last week worrying aloud about how large a deficit the Liberal government might be preparing to run — and then the new leader of the Conservative Party more or less disavowed any interest in balancing the budget.

"Economic growth is as important as controlling spending," Erin O'Toole told the Globe and Mail, adding that his goal would be to see the budget balanced over a "decade or so."

The Conservative leader in 2020 sounds like Justin Trudeau did in 2015, when the rookie Liberal leader broke with Canadian political orthodoxy and said that a government led by him would run a series of annual deficits to fund new spending. Take it as another sign of how completely the pandemic has upended the world.

But it also could suggest that this conversation now needs to focus as much on what a government spends borrowed money on as it does on how much borrowed money it plans to spend.

Deficit deadlines getting further off

When Andrew Scheer was seeking the Conservative leadership in 2017, he vowed a government led by him would balance the budget in two years if it came to power after the 2019 election. By the time that election rolled around, Scheer had changed his target to five years.

Depending on how he defines "a decade or so," O'Toole could be casting so far into the future that he would need to win three elections to fulfil his promised return to balance.

O'Toole is no doubt keen to take the politically dangerous question of budget cuts off the table — or at least to shrink the reduction in spending he might have to explain in the next campaign after accounting for any promises to cut taxes. The Conservatives likely will still spend more time talking about the need for restraint. They might also try to plead that the pandemic, coupled with a lack of discipline on the Liberal government's part, has created a situation that will take a decade to resolve.

When 'how much' matters less than 'why'

But the implicit message is that balancing the budget is not the be-all and end-all of credible governance. And that clashes directly with what the Conservatives have said about the Trudeau government over the past five years.

Worries about the size of the deficit and the shape of the fiscal track are not entirely unwarranted. The actual details of the Liberal plan haven't been settled yet — but even if the last six months have stretched our imaginations as to how large a federal deficit can be, there are probably still broad constraints on how much a government can credibly spend. The Trudeau government will need to mind the opinions of bond markets, rating agencies and voters. Debt carries risk and debt-servicing charges could become a concern again.

The Liberals might not want to be tied down by a "fiscal anchor" right now — but they might not be able to get away with casting off all shackles, either. They might need to show, for instance, that the deficit and the debt-to-GDP ratio will decline in the years ahead. They also could aim to keep their short-term spending in line with what other G7 countries are doing. 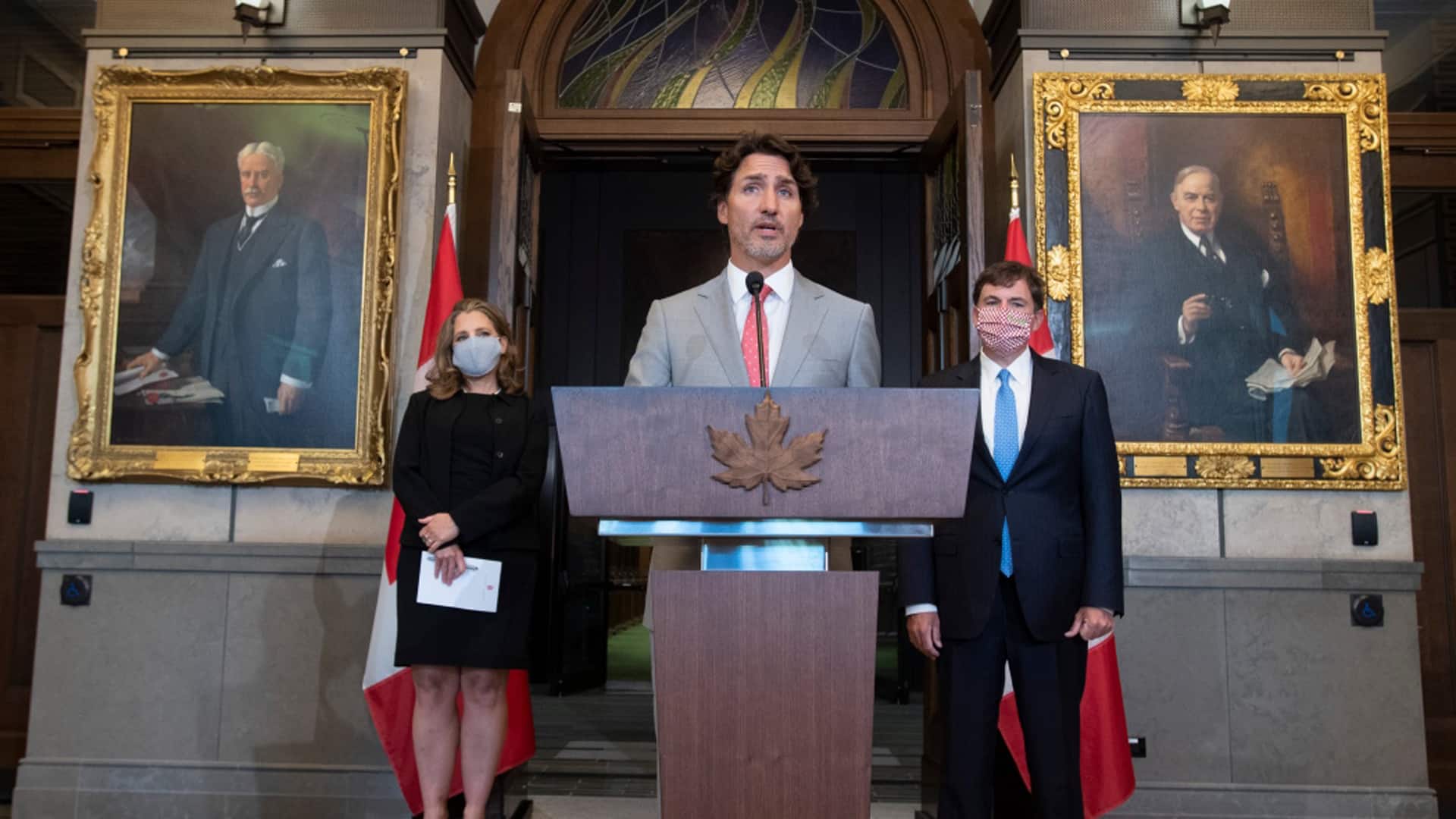 5 months agoVideo
9:18
Prime Minister Justin Trudeau will lay out a vision for a major overhaul of the Canadian economy when he delivers the Speech from the Throne on Sept. 23. The Liberals have signalled that their plan will involve even more deficit spending in order to respond to the challenges posed by the coronavirus pandemic. 9:18

But the Liberal government's choice of targets for deficit spending will also matter — perhaps just as much as the total deficit itself.

"I think composition is a big issue," said Rebekah Young, director of fiscal and provincial economics with Scotiabank. Permanent new social spending that is unlikely to increase economic growth might worry rating agencies, she said, while an overhaul of business investment incentives might be looked on favourably.

"If we are going to be investing more, it should be in stuff that's actually going to strengthen growth [over the next] two to three years," Young said. "There is a window to make these bigger investments, but I think the risk is that they announce more on the expenditure side that is ongoing and on the revenue side we don't have a way to pay for it and it does become a structural imbalance."

The pursuit of growth can involve new social spending. Increased funding for child care, for example, could boost economic growth by making it easier for more parents — particularly women — to work.

In an article posted online this past weekend, Mike Moffatt, an economist at the Smart Prosperity Institute and a professor at the Ivey Business School, expanded on this notion of what would constitute worthwhile deficit spending. Moffatt argued that any new deficit spending should focus on one of five long-term challenges facing Canada: fighting climate change, dealing with an aging population, increasing economic growth and productivity, removing barriers to participation in the economy and making housing more affordable.

"When it comes to taking on more debt (or reducing debt), I believe we should focus on the quality of the expenditure rather than the quantity of existing debt," Moffatt explained.

Speaking to CBC Radio's The Current this week, O'Toole struck a similar note.

"We have to make sure that, if we're basically indebting our children, we're doing it for strategic, smart reasons," O'Toole said — neatly tying together the Conservative Party's pre-pandemic emphasis on frugality and its post-pandemic turn toward investment.

"If it's about getting people back to work, [if] it's about helping the vulnerable, reinforcing some long-term care homes, working with our provincial partners to prepare for a second wave, that's great."

This is not how federal budgets typically are discussed. In recent times, the existence of deficits and their relative sizes have been the primary focus of opposition criticism and political commentary. The question of what that money gets spent on tends to come a distant second, except when some misuse of funds is discovered.

The question of whether the budget is in surplus or deficit will never be irrelevant. But the deficit has tended to siphon attention away from larger and more interesting questions about how public funds are directed and used.

If there is some general agreement in 2020 that there is no strict need to rush back to a balanced budget — and if the Liberals can keep their own proposed spending within some vaguely acceptable range — then the recovery might be now framed by a much better debate about what a post-pandemic economy ought to look like, and how the federal government could make it possible.